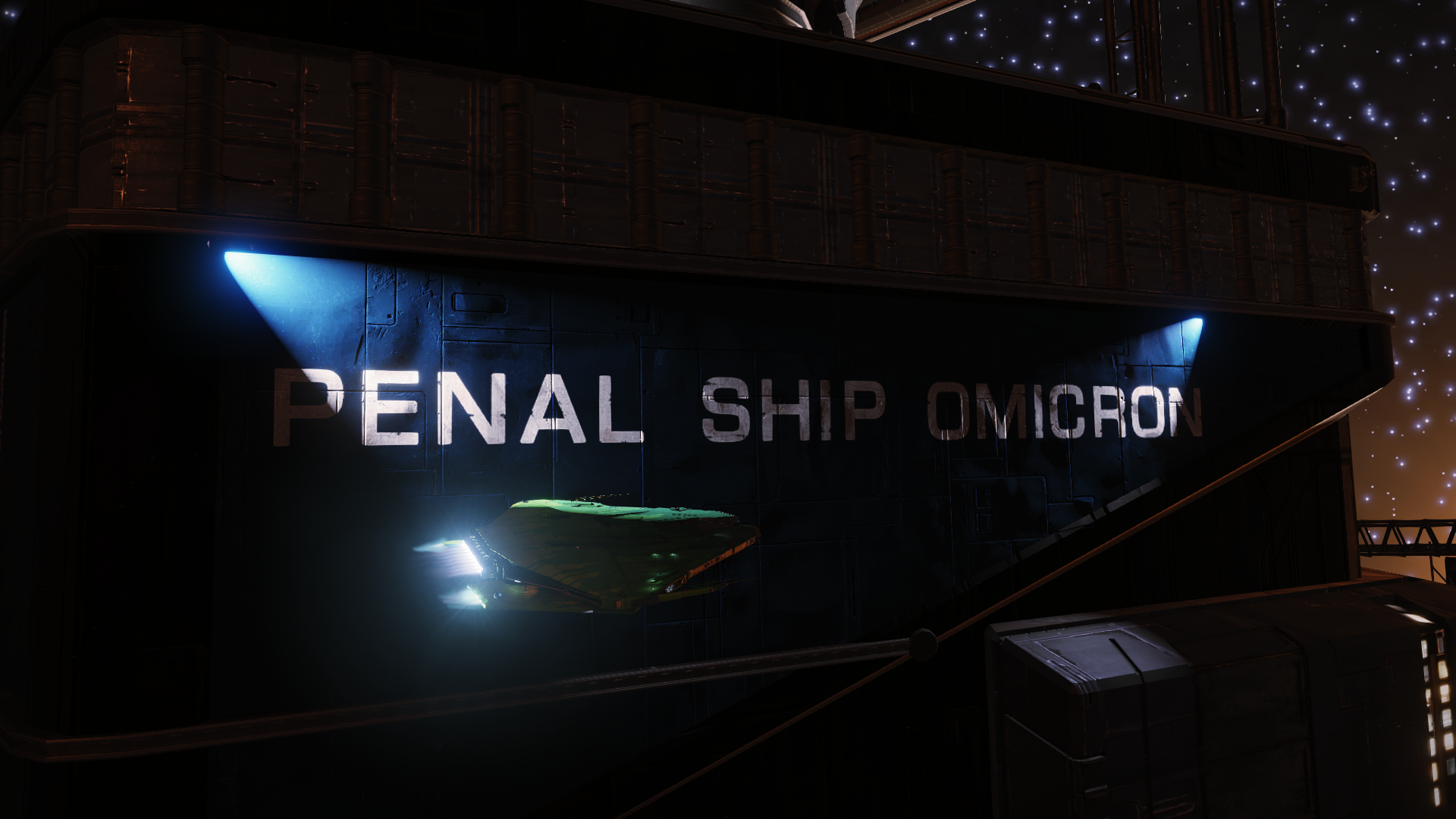 Trying to catch up with the Distant Worlds 2 expedition fleet.

Friday last week, I left the Omega Mining Operation for the Arkgamanon Mountain Range as planned in my last Distant Worlds 2 Mission log. My trip to FOSDEM and the usual time needed to recover from that meant, that I was already quite behind the Distant Worlds 2 fleet. But then, after maybe two dozen jumps, catastrophe hit the ISV Roebuck as I jumped directly into a cluster of three bunched up stars. As soon as I’d exited witchspace, my ship started to overheat. Even after deploying two heatsinks, I still took a couple of percentage points of hull damage.

This, coupled with a pretty busy weekend, necessitated a change of plans. I decided to skip any points of interest on the way and head for a station with repair facilities in the general direction of the DW2 route. But after I’d made it there and got my ship back up to full health, I realised that I hadn’t removed the cargo rack I had fitted at Omega Mining to take part in the community goal. And I couldn’t do so at this planetary port, because it didn’t have outfitting services available.

I therefore decided not to head to the Conflux Settlements in PRU AESCS NC-M D7-192 but to the nearest station with outfitting roughly along the expedition route. With the help of EDSM, I figured out that this was Penal Ship Omicron in Stuelou AT-J c25-24. I started to make my way there during the week.

I cut out all sightseeing to get to the prison megaship as quickly as possible. You can follow the last part of that trip in a recording of a nearly three hour long stream I did on Tuesday night. I even met up with reemt and igwigg from the Discord at the prison barge and we had some fun. And by fun, I mean I got a bounty on my head for my troubles…

Finally docked at the prison barge – the thing looks like it’s right out of Babylon 5 by the way – I removed the cargo rack and refinery from my ship. Even though people told me on stream that they apparently don’t weigh anything if you’re not carrying any ore. Well, I’d made it this far, so I did kind of wanted to go through with it, even if only for roleplaying reasons.

Yesterday, I left the prison ship to head for the fifth expedition waypoint: Polo Harbour in Boewnst KS-S c20-959. Going there directly would mean that I would skip waypoints 3 (the Conflux Settlements) and 4 (Shepard Shallows in Clooku EW-Y C3-197), but taking into account my current position and the fact that I only had a day to make it to the most recent expedition target (waypoint 5), there was really no other alternative. So I set off for Polo Harbour directly, bypassing two expedition waypoints.

On the way, I did stop by Michell’s Legacy in Boewnst AA-A h33, a system with six (!!) black holes. Quite a sight! I even managed to pass through that system relatively undamaged. After that adventure, I set course for Boewnst KS-S c20-959 and pulled as many hyperspace jumps as quickly as I could. As I write this, I am now docked at Polo Harbour. I’ve sold quite a lot of expedition data, repaired my hull and have restored my ship’s livery to full glory. And I’ve finally caught up with the expedition fleet.

A few hours ago, the next waypoint for the expedition was announced. We are now getting quite close to the galactic core and entering Stage 2 of the expedition. We are supposed to convene in Dryau Ausms KG-Y e3390 on 24 February at the latest. EDSM describes this system as follows:

Absolute madness of a system from a topology standpoint. The black hole drop star is in tight binary with a white dwarf, which itself has a gas giant orbiting fully inside it’s exclusion zone and passing through the cones with a period of 14 minutes. Less than 20ls away lies a binary of a huge waterworld and a ringed gas giant, the latter of which has 2 volcanic moons skimming the very edge of the rings on slightly inclined orbits. The views offered from the surface of the landable moons is unlike anything seen elsewhere in the galaxy, and all objects in the inner system have extremely short orbital periods creating a dynamically changing view in the sky. Absolute must visit for anyone in the area.

That really sounds like I should try to get there early and then stream my exploration of this system for all of you. I will try to make that happen some time this coming week. I’ll announce my plans on Twitter and will of course upload the stream recording on YouTube later on.

I’ve now finished approximately a quarter of the Distant Worlds 2 journey. I’m quite happy I have made it this far. And I’m really glad to have finally caught up with the fleet. I’ll leave you with an overview of my journey up to this point from EDSM. Brannigan signing off. 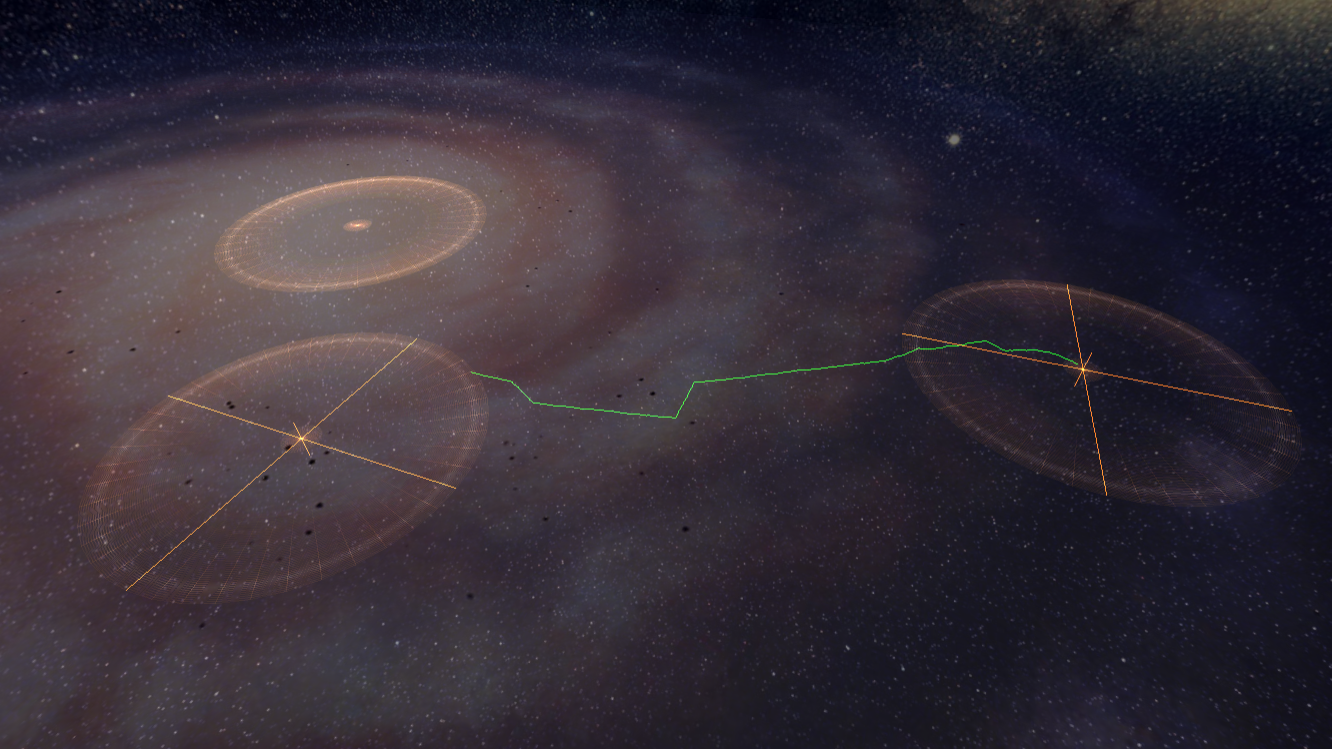