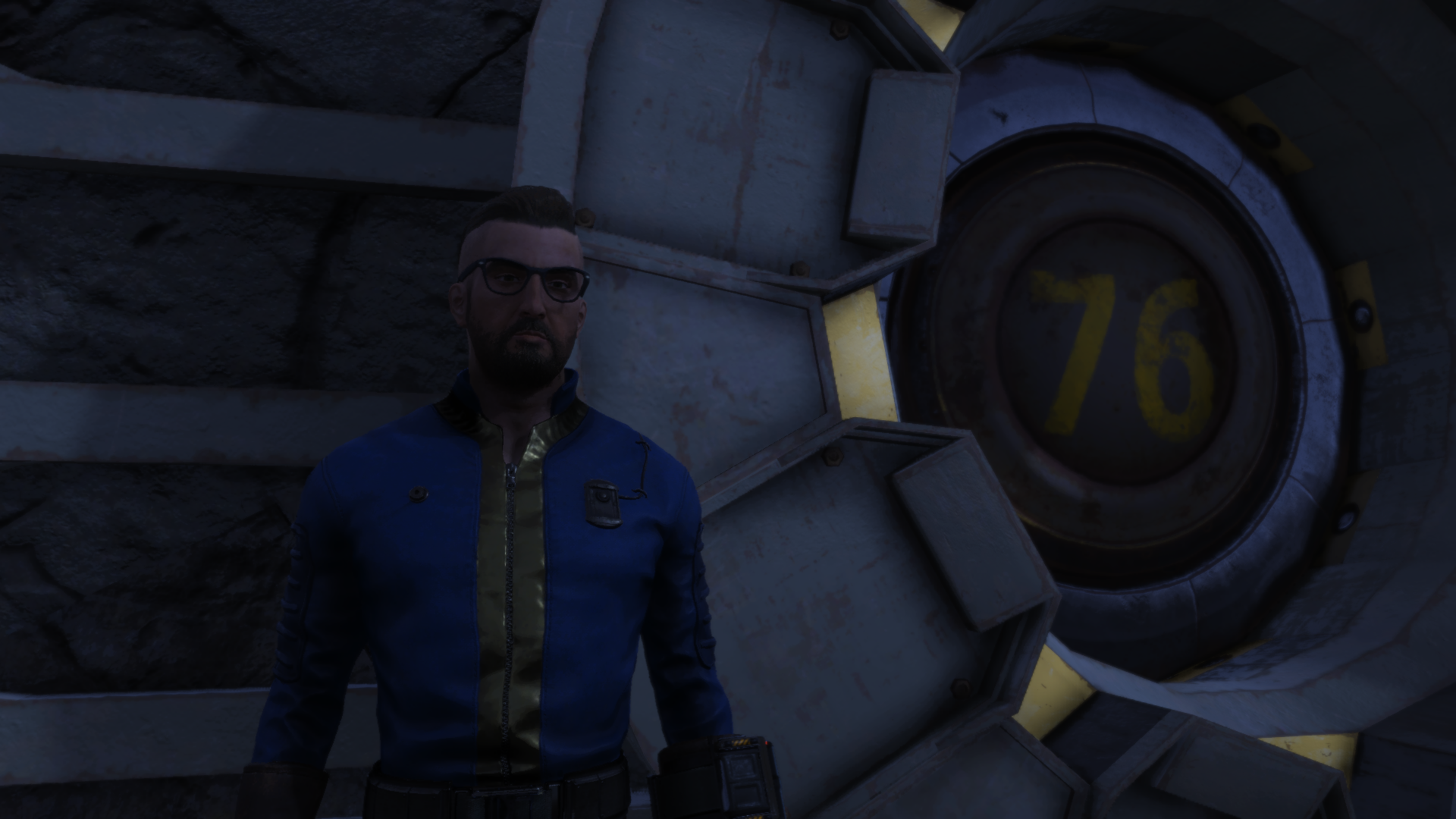 The first part of my review-in-progress of Fallout 76, the newest game in the acclaimed post-apocalyptic RPG franchise.

This is Part I of an ongoing review of Fallout 76. Since this is a potentially very huge multiplayer world, I thought it best to review it while I was playing it.

I’ve just returned from a trip to San Diego, Las Vegas and LA. As part of that trip, I’ve driven through the Mojave Desert in a Dodge Charger R/T and visited the town of Goodsprings, where the player character first wakes up in Fallout: New Vegas. I’ve got a massive Fallout buzz from that trip, so it’s perfect timing that Fallout 76 got released just as I was flying back home from LAX. I downloaded the game as soon as I was back home. I’ve been playing it quite a bit today, to get over the jetlag and wind down after a very exciting adventure in the US. I’ve also decided that I’d start writing about it. This is a big, somewhat open-ended MMO, which makes it very hard to review in one go. Therefore, I’ve decided to make this a review-in-progress in the style of PC Gamer. I’ll provide a final score in one of my later posts about the game – as soon as I feel ready to pass a final verdict on it. 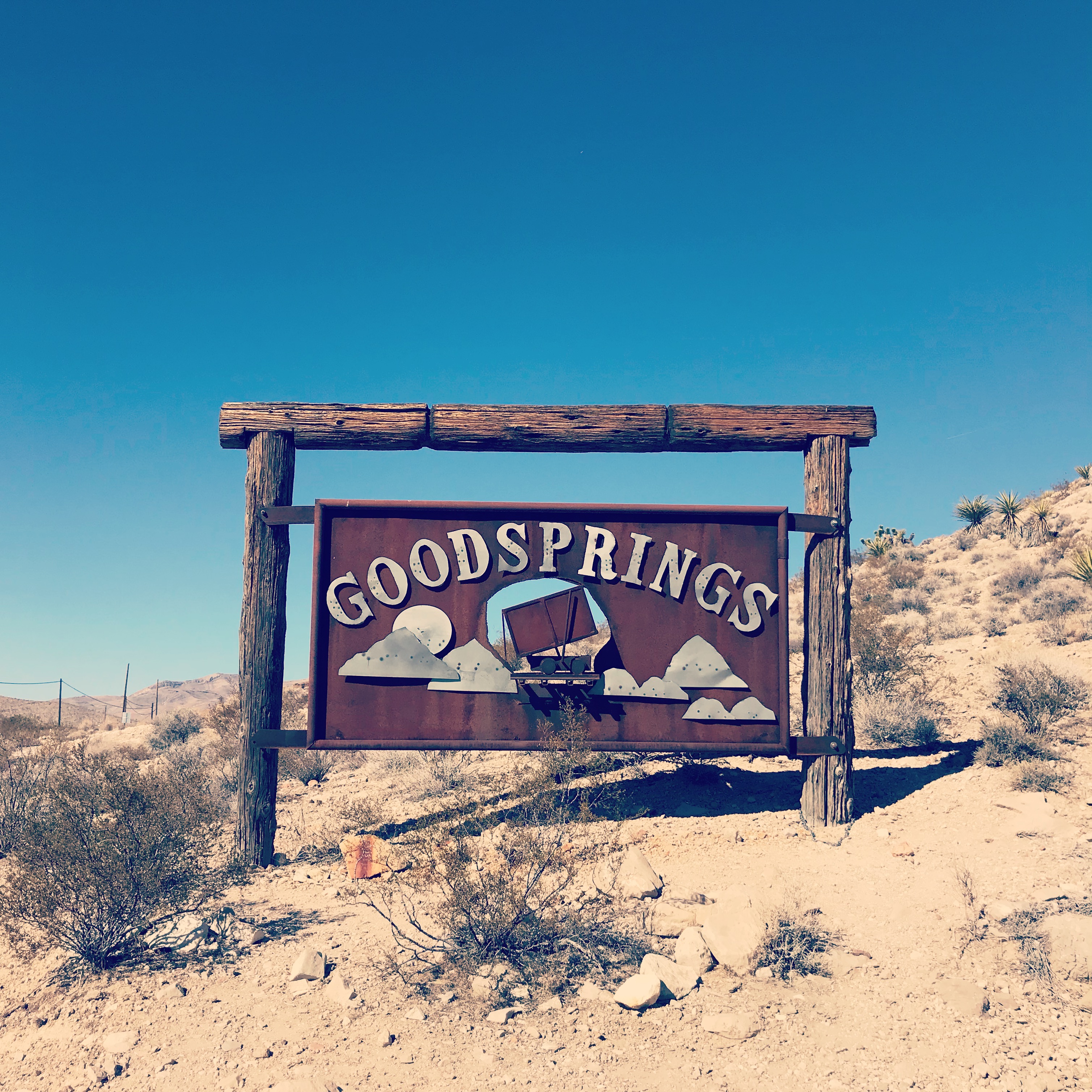 Right from the start, Fallout 76 feels like a Fallout game. The trappings of the familiar post-apocalypse are all there and the Vault-Tec memorabilia make you feel right at home if you’ve played any of the games in the franchise since good old Fallout 3. But, at the same time, Fallout 76 also feels very different. The corpses aren’t skeletons, the wasteland isn’t as wasted as usual and you aren’t the only person to leave your vault. Indeed, there are other vault dwellers running around everywhere, but there’s an utter absence of NPCs. Add all of this together and what you get is a very weird feeling about Appalachia, ie. post-apocalypse West Virginia. From the very first minutes of the game, it seems clear that Fallout 76 is a definite departure from the single player exploration the series has focused on so far.

Despite its MMO nature, I had hoped to be able to play the game without interacting with fellow players. Throughout the first two-and-a-bit hours, this has so far worked out. The first thing I did when I got the chance was to turn off the player voice communication in-game, as I was treated to incessant breathing noises and even a faint, German version of the game’s intro dialogue while in the character creator. Why they would turn on voice chat in an area of the game that has no other players in it, I will probably never understand. It was certainly a pretty annoying start to my experience of Fallout 76 in an area (the character creator) that is usually one of my highlights of any game. From there on out, I’ve been following the main quest line, which seems to work well on your own. You just need to ignore all the other 76ers running around, presumably doing the same tasks as you. 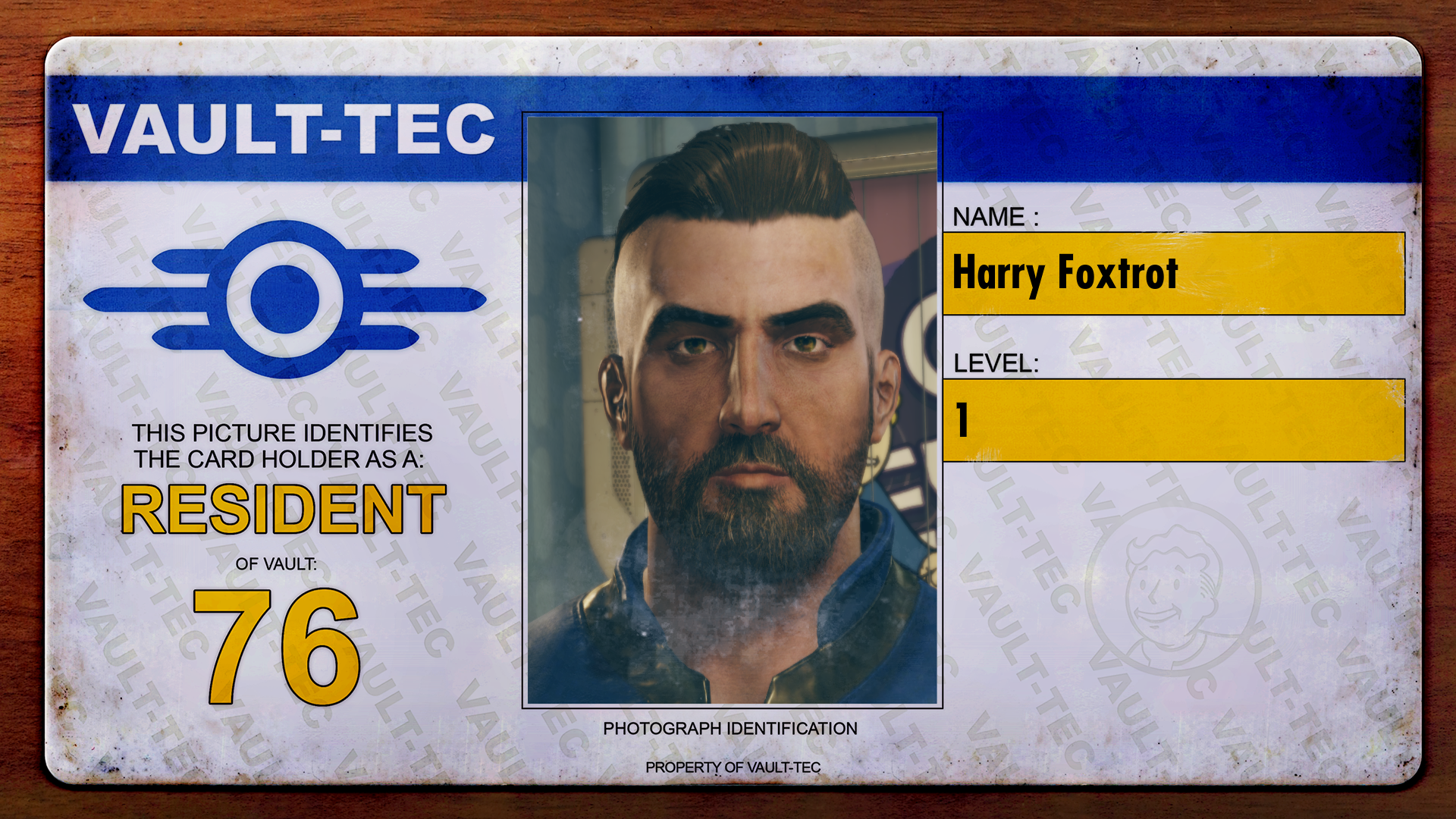 Which brings us to the plot of the game. Unsurprisingly, you wake up in a vault; Vault 76 to be precise. The twist on the story this time is that your particular vault was actually designed to keep its inhabitants – a group of geniuses from several different disciplines – save and secure so that they could colonise what was left of the US after the eponymous fallout had settled. That’s pretty unusual as far as Vault-Tec is concerned. Anyway, your vault opens, as planned, 25 years after the bombs fell. The game starts in 2102, which means it is set more than 150 years before Fallout 3. This explains why the corpses littering the landscape aren’t as decayed and why the Great War is still fresh on people’s minds. Or at least fresh on their minds as they recorded the holotapes you’ll find everywhere – there don’t seem to be any living people around. Yes, it’s jarring every time you realise this. It makes you feel lonely and special at the same time, which does kind of fit the backstory of Fallout in general, I guess. 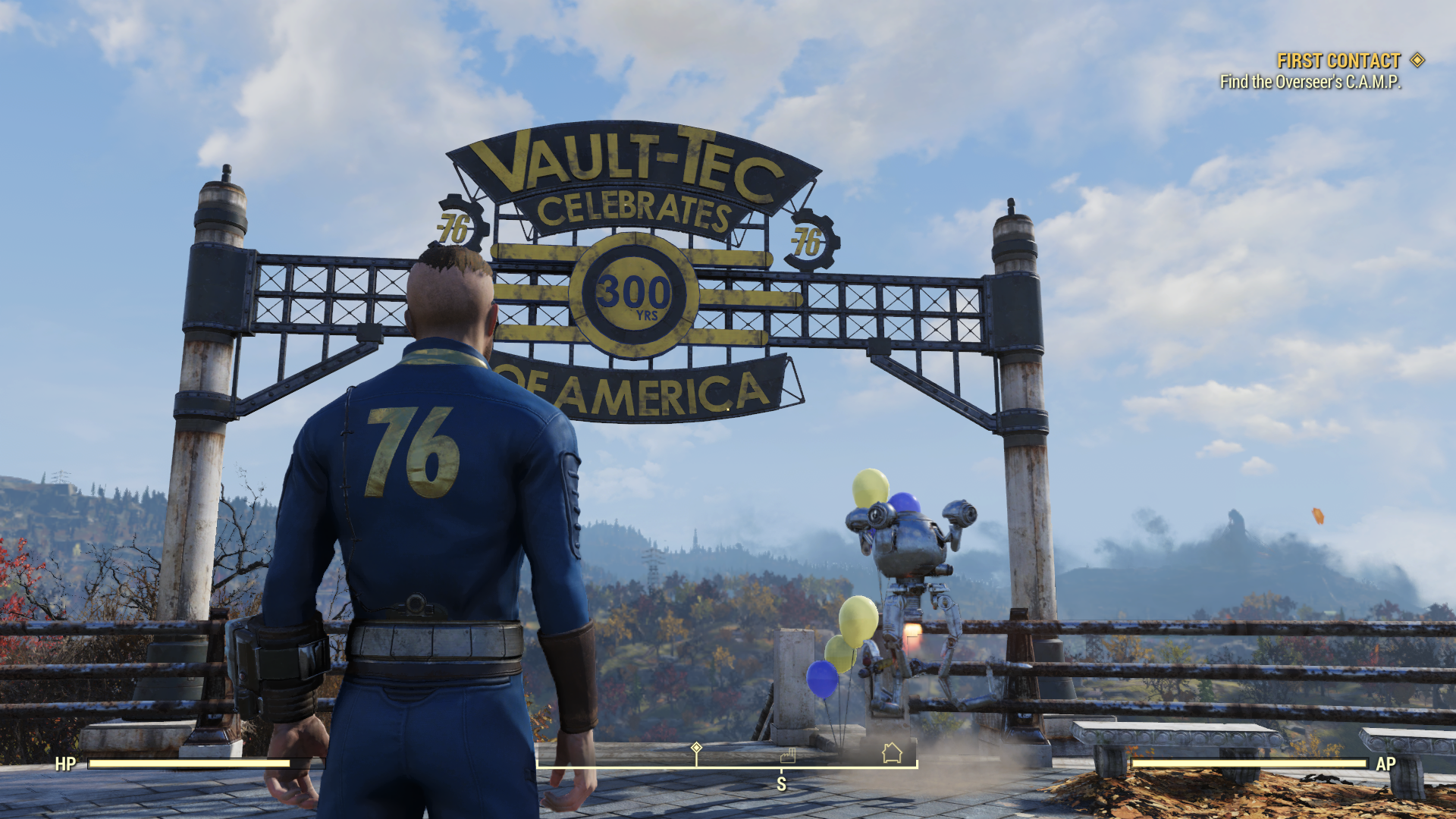 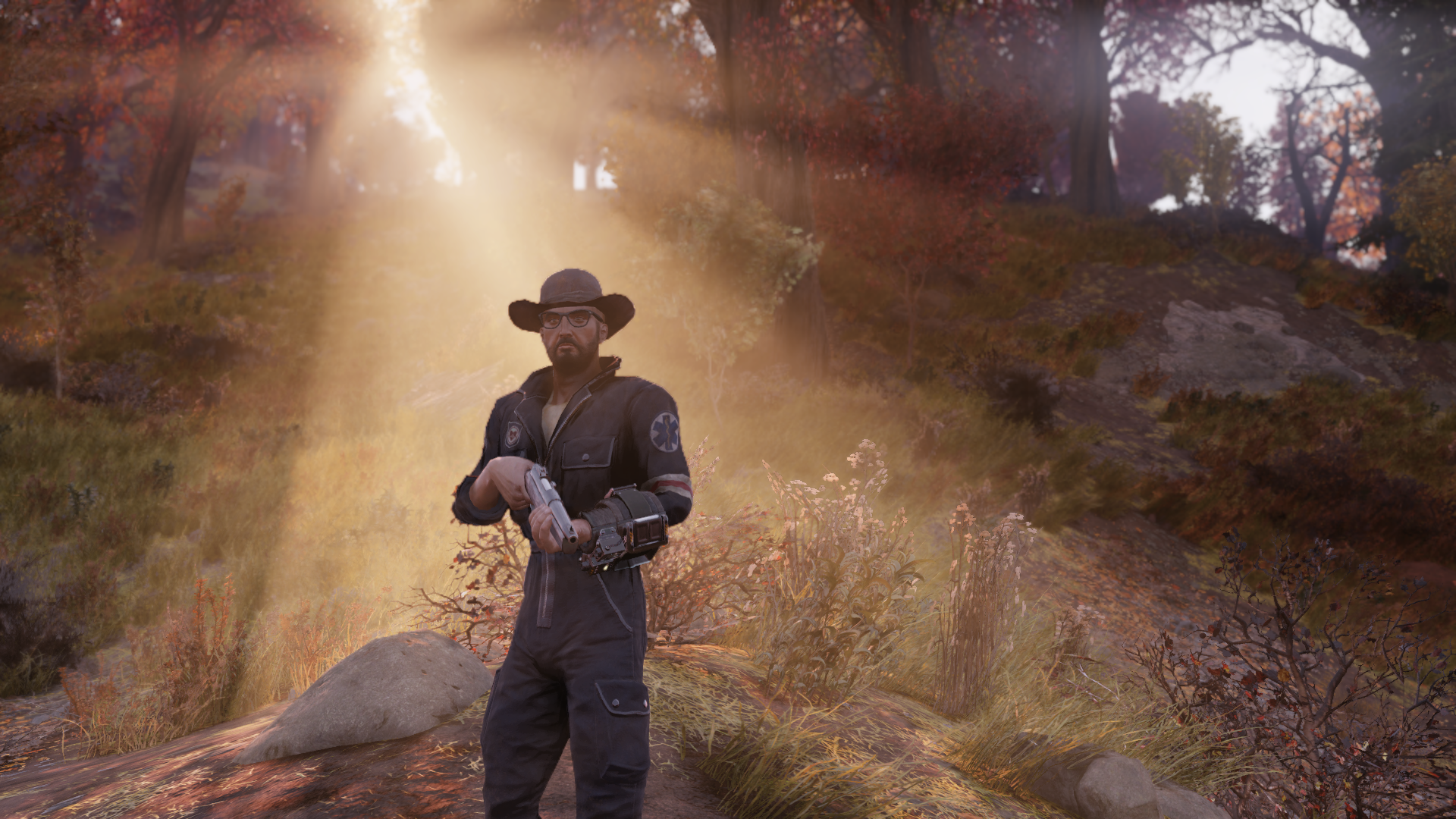 At first it isn’t clear why there’s nobody around who wasn’t in Vault 76. The part of the US the game is set in seems in remarkable good shape, considering the all-out nuclear war that kicked off, and ended, in 2077. This is probably due to the remote location of Appalachia and the apparent lack of military targets in the area; if you discount the nuclear missile silos that get mentioned right away. More on this in later parts of this review. It’s a main plot point, I can tell that much already.

Anyway, everybody seems to be dead. There aren’t even ghouls around that aren’t feral. This might be due to a disease that gets mentioned by some of the records you discover in the very first settlement. These were left by an organisation called “The Responders” who were apparently made up of emergency personnel like firefighters and paramedics who took to helping survivors after the war. But they seem to be gone too, at least from the immediate sourroundings of Vault 76. There are some hints that they were also wiped out by the mysterious plague. More on this as I discover it by progressing through the game. 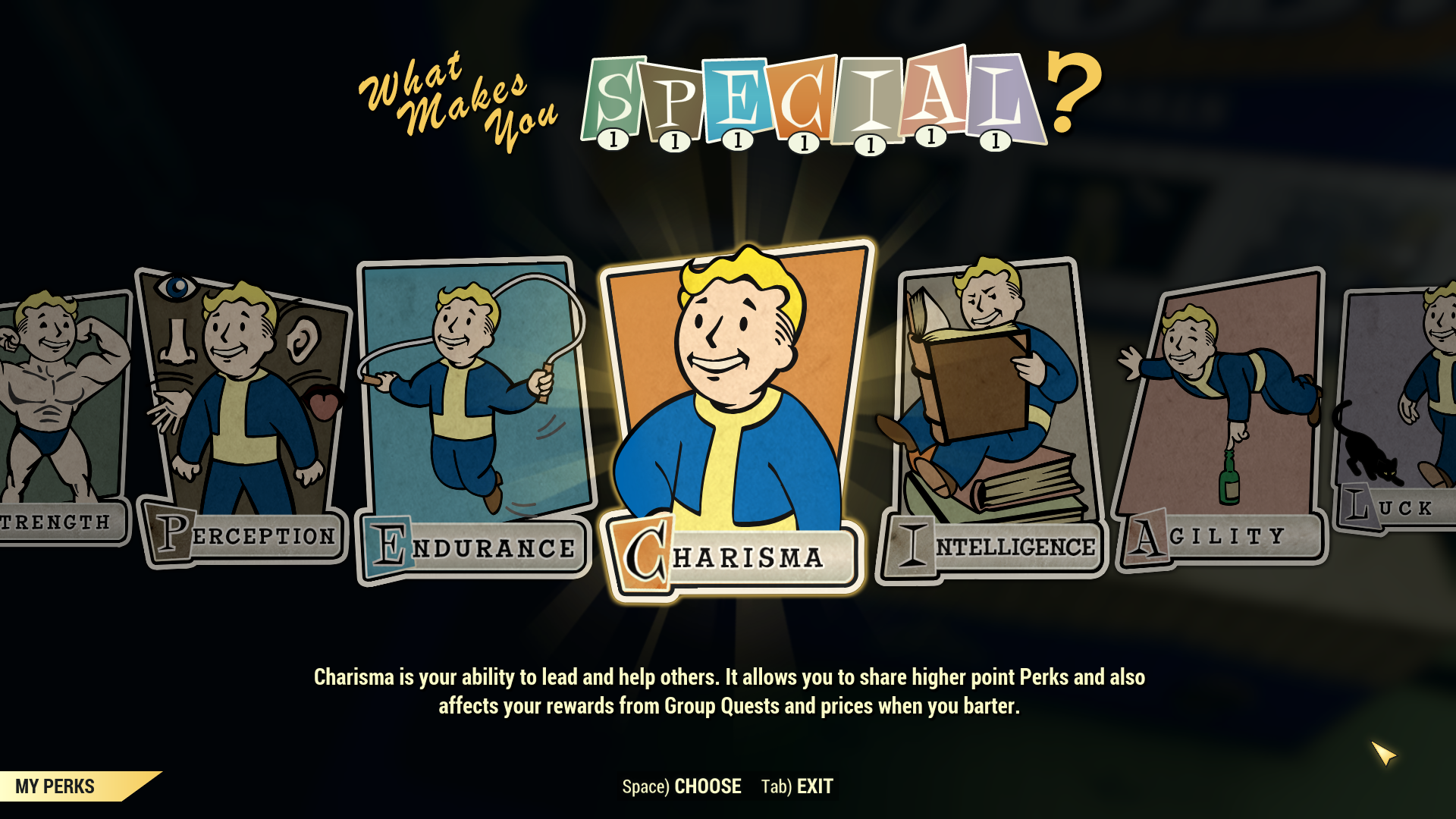 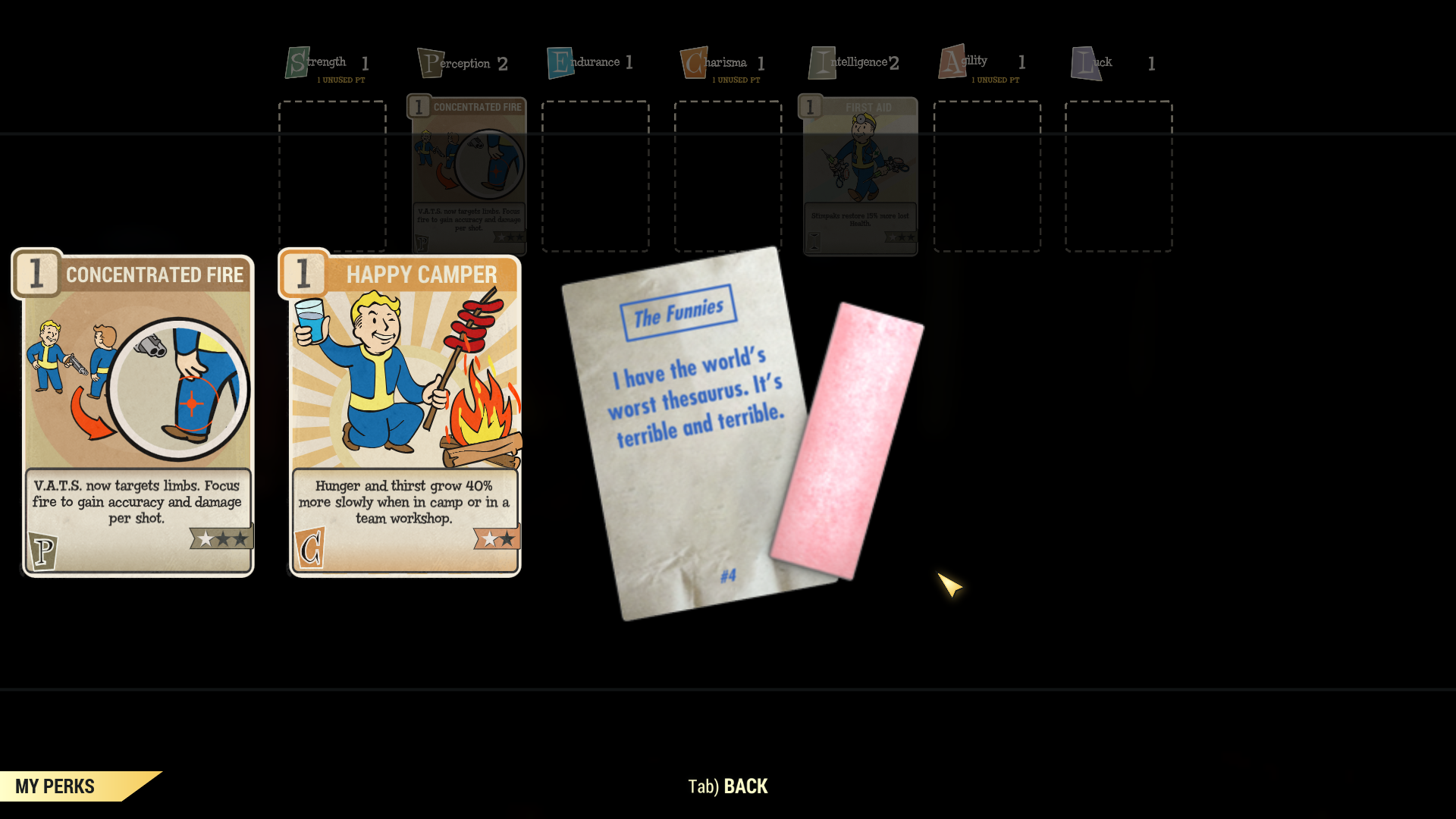 The most immediate change, aside from the dearth of NPCs, is the revamped S.P.E.C.I.A.L. system. Skill perks are now awarded in the form of trading cards. You even get packs from time to time that get opened in a way that is reminiscent of the animations in Hearthstone. In a nice touch, these booster packs come packaged with (virtual) chewing gum and a very bad joke. Duplicates of these perk cards get added together and upgrade the skill in question. You have several slots per S.P.E.C.I.A.L. attribute that you can put cards in. How many slots you have is dependent on your current level, it seems. The skills in the slots are active, all other cards (including those with a level cap that you haven’t reached yet) are put aside. You can exchange the cards in each S.P.E.C.I.A.L. slot at any time. 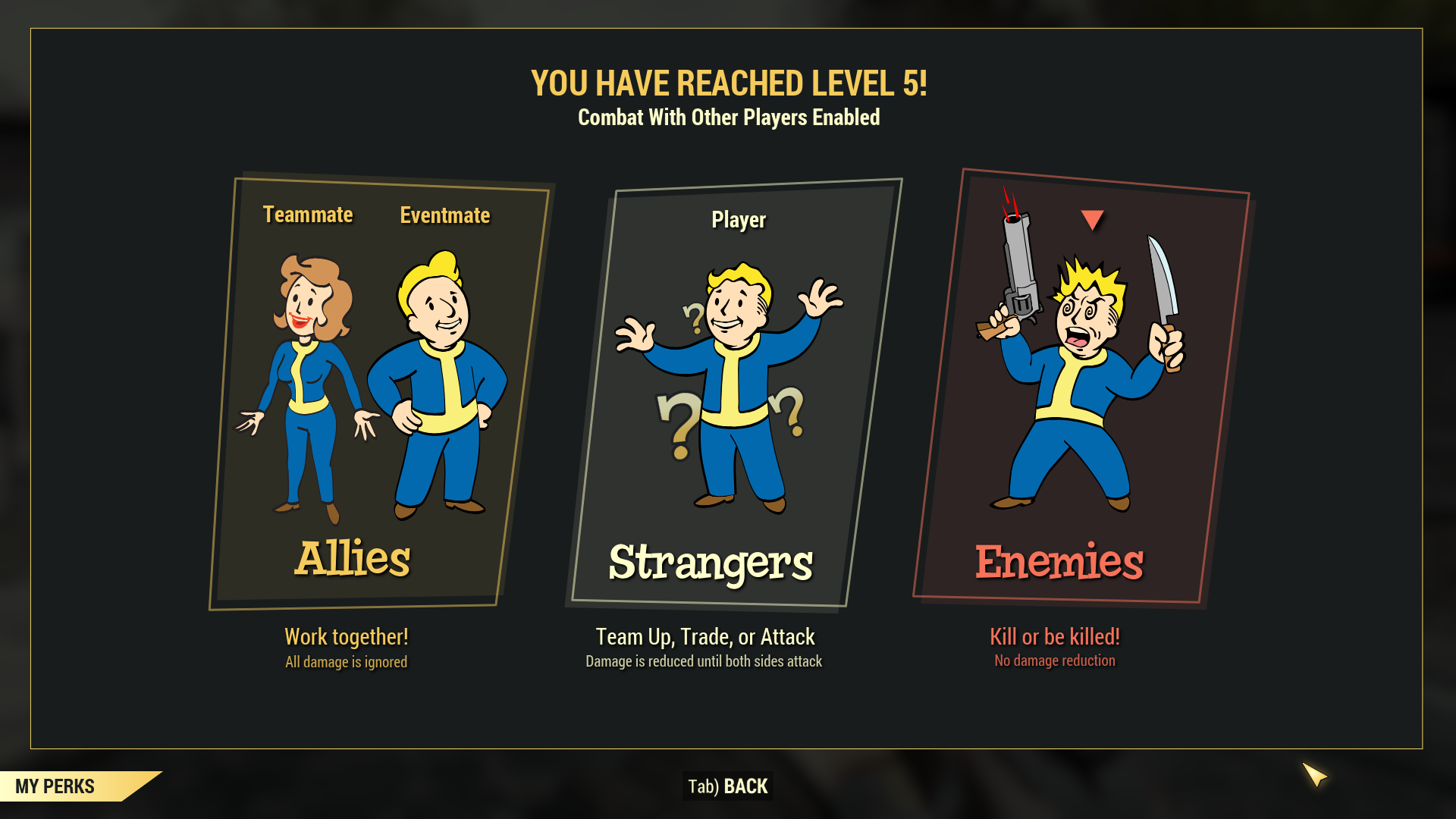 Once you reach level 5, the game tells you that PvP combat is now enabled. Apparently other players take reduced combat damage when you attack them until they decide to fight back. Players you team up with (permanently or as part of a special event) have friendly fire disabled entirely. However, since I’m still trying to play this game on my own, ignoring other player characters, I haven’t tested how this works yet. So far, I’ve had no reason or desire to interact with other humans in this MMO. We will see if this changes as my review progresses. 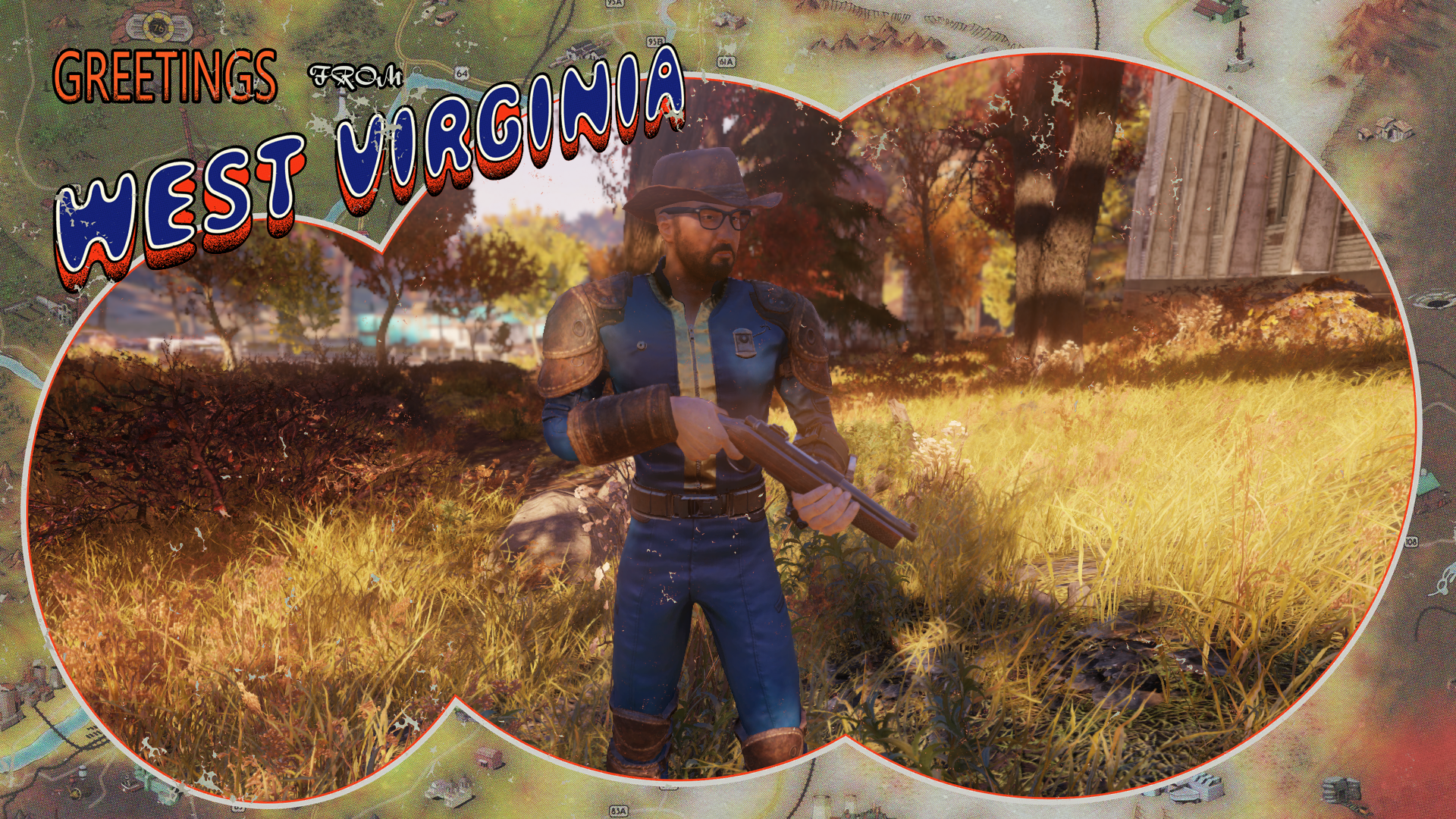 I’ve reached the first small settlement and completed all the main storyline quests there as well as looked around a bit to collect holotapes and miscellaneous loot. There is a lot less loot, by the way, especially on dead NPC characters. In other Fallout games you were always able to strip corpses bare, especially for interesting wardrobe items. I guess this game is more stingy with that kind of loot, because Bethesda expects you to buy stuff in their new store. I’ll have a closer look at this change in a later part of my review, when I’ve played around with it some more.

So far, I’ve been having fun. But this is mostly despite the changes to the familiar Fallout formula, not because of them. This might not bode well for my ongoing enjoyment of the game, or it might be inconsequential compared with my undying love for all things Fallout – much like many of the changes the different developers have made throughout the history of the series. I’ve got to play some more in order to figure this out – stay tuned for Part II of this review.

Read other posts
← Scorched Earth Shadow of the Tomb Raider →