The final part of my review-in-progress of Fallout 76, including my final verdict on the game.

This is Part IV of an ongoing review of Fallout 76. Since this is a potentially very huge multiplayer world, I thought it best to review it while I was playing it.

I’m done with Fallout 76. Reviewing this game was quite the rollercoaster ride. It telegraphs a lot of things on the outset that later turn out not be true. I can’t make up my mind if Bethesda did this on purpose to mislead players into buying and not returning the game or if it is an accident based on poor execution of a confused design. But in the end it doesn’t matter for the review anyway. So, let’s get this over with… 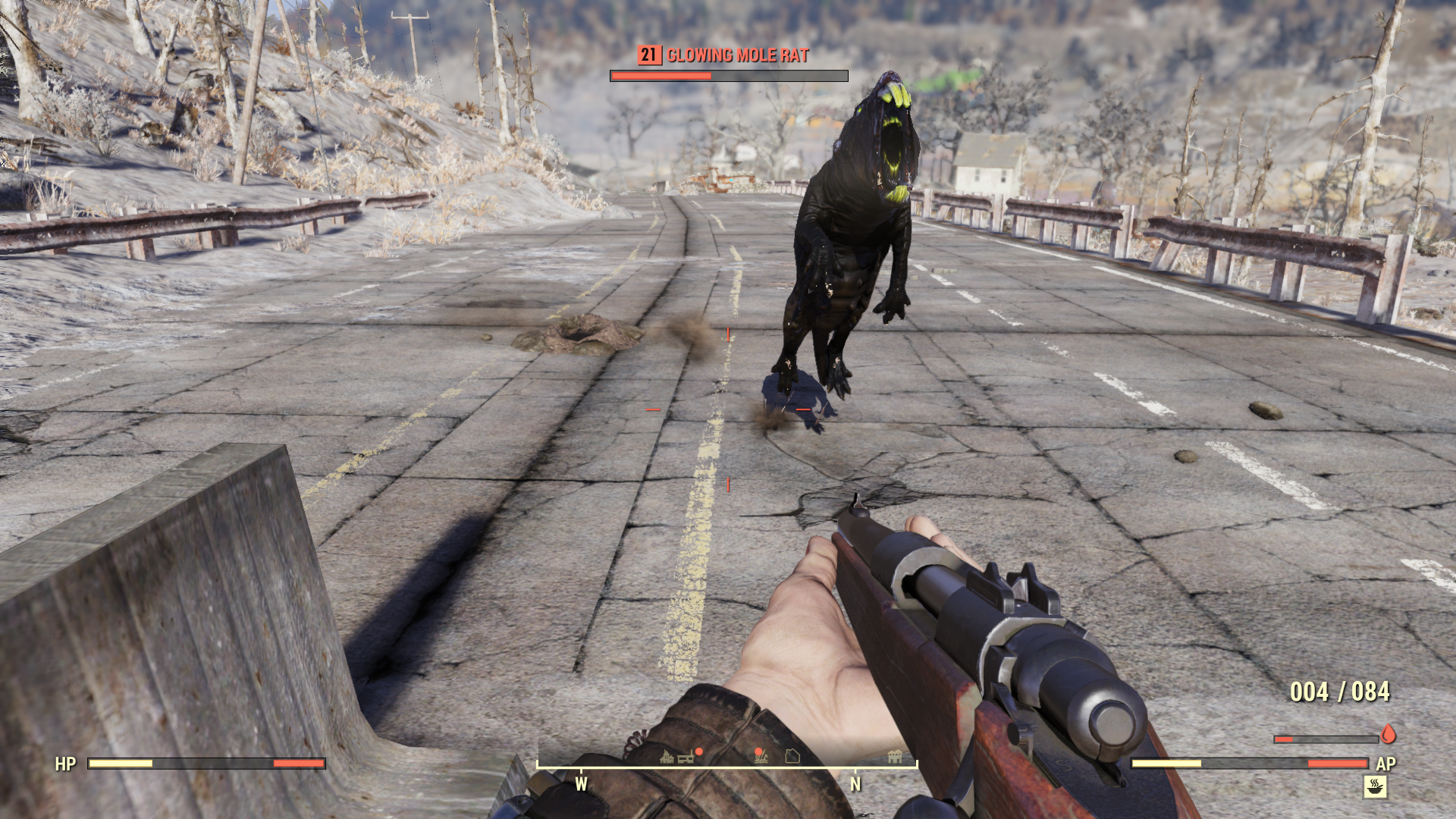 As a single player experience, Fallout 76 doesn’t work. It has an incredible world full of interesting things, but all the people have been dead for years. Not only does this severely limit your interactions with the world, it also takes away the stakes and makes everything you discover basically meaningless. True, Fallout has always included a lot of incidental storytelling done through its environment – and usually this has worked very well. But we’re now discovering that this was only the case because it was tempered by quests also involving very interesting and memorable characters and companions to interact with. Fallout 76 features bland stories involving dead people. The fact that these are set in an absolutely stunning world doesn’t make up for how disappointing it is to follow its quest lines and puzzle out its mysteries.

The game world is huge and very varied. It’s kind of what I hoped Fallout 4 would have been. Fallout 76’s world with Fallout 4’s characters and story would probably have been the perfect Fallout game. Sadly, Bethesda decided to separate them out into two different games to make more money. Every time I think about this game’s world, it makes me sad. It makes me want to explore it on my own, in a single player game – an experience that Bethesda will probably never allow me to have. 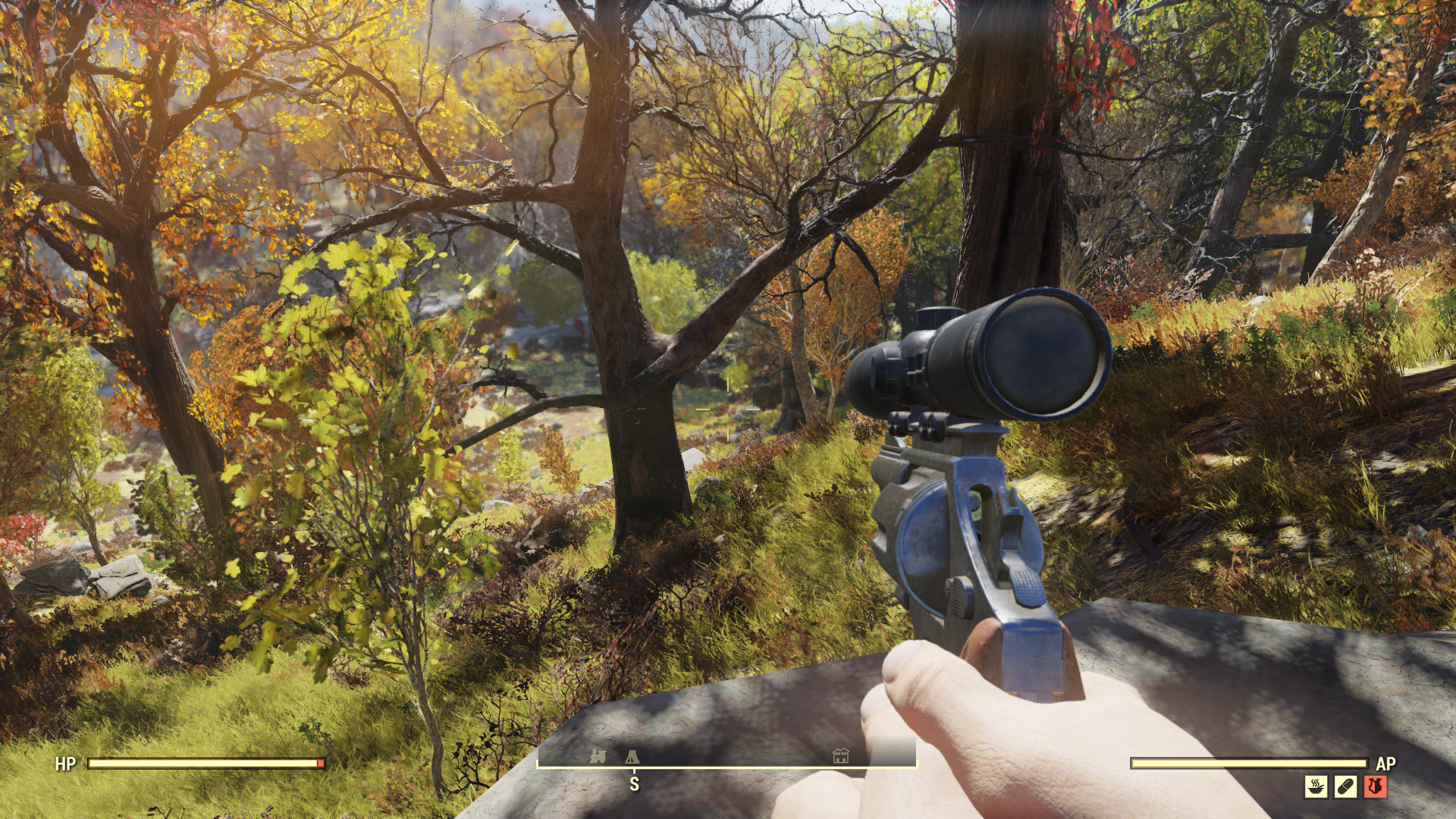 Now, it’s a multiplayer game; does the multiplayer work? Probably. I guess in a certain way it does. It’s probably quite OK as a co-op game. Not that I know anyone who’s playing so that I could give that a try. All of my friend’s seem to have been wise enough to hold off from buying it until some reviews were out – and then decided that it wasn’t worth it. As a straight up multiplayer shooter, there are certainly better games. Like Battlefield V or PUBG. And there are certainly many better survival games that take survival aspects a lot more seriously instead of just sprinkling them in to put a checkbox on a website somewhere. Some of these are even set in similar post-apocalyptic worlds.

In Fallout 76, PvP combat is toothless and boring. Tactically, it’s a joke when compared to heavyweights of the genre like PUBG. The building and survival aspects were already in Fallout 4 and are virtually unchanged from that game. The NPC combat is also very similar, except that V.A.T.S. isn’t as satisfying and the combat difficulty is generally very, very low. And if I say that, that means something – I’m usually the first to turn any game down to easy to have more fun. I do like the new skills system, though, and the photo mode is amazing. 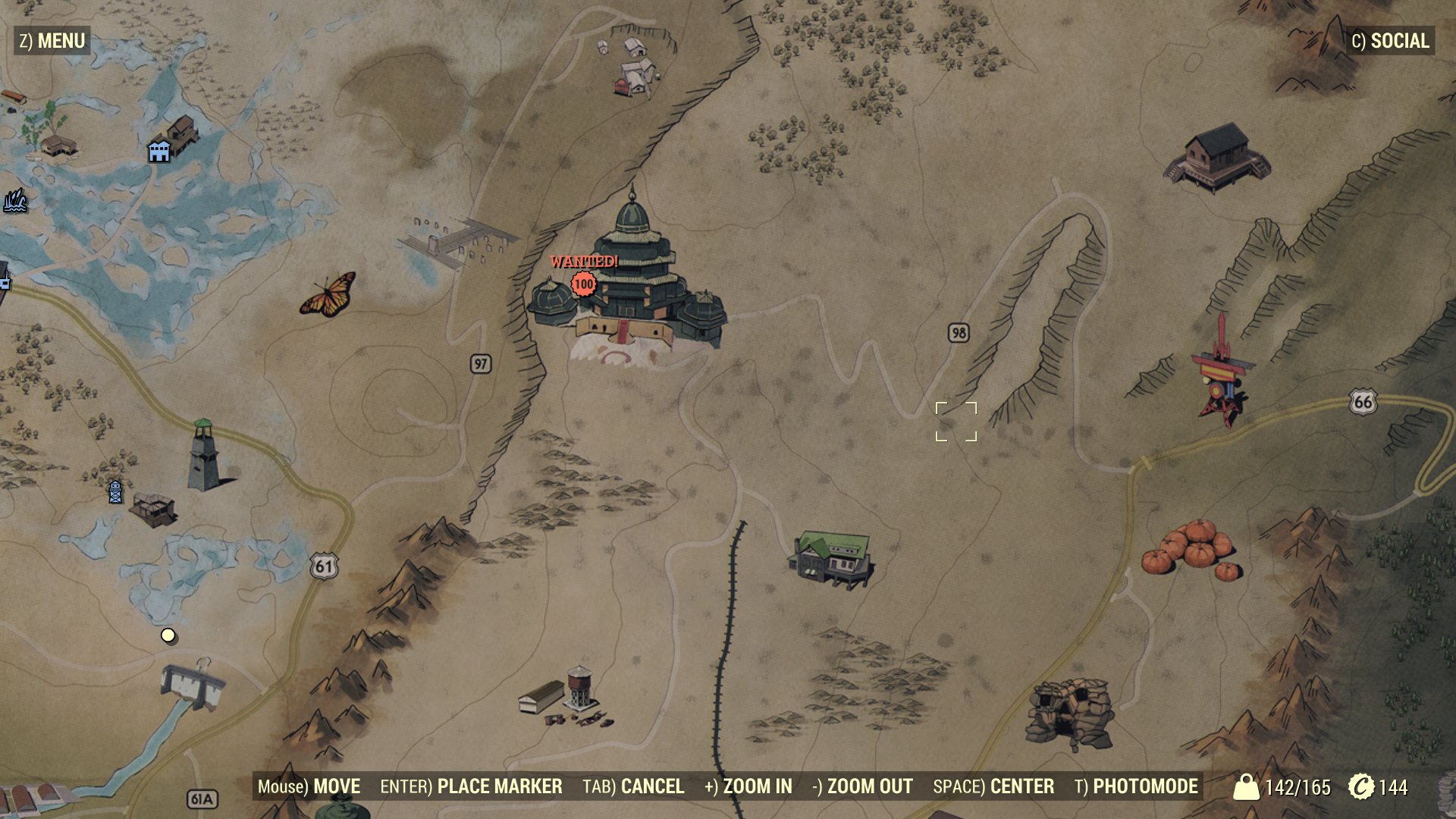 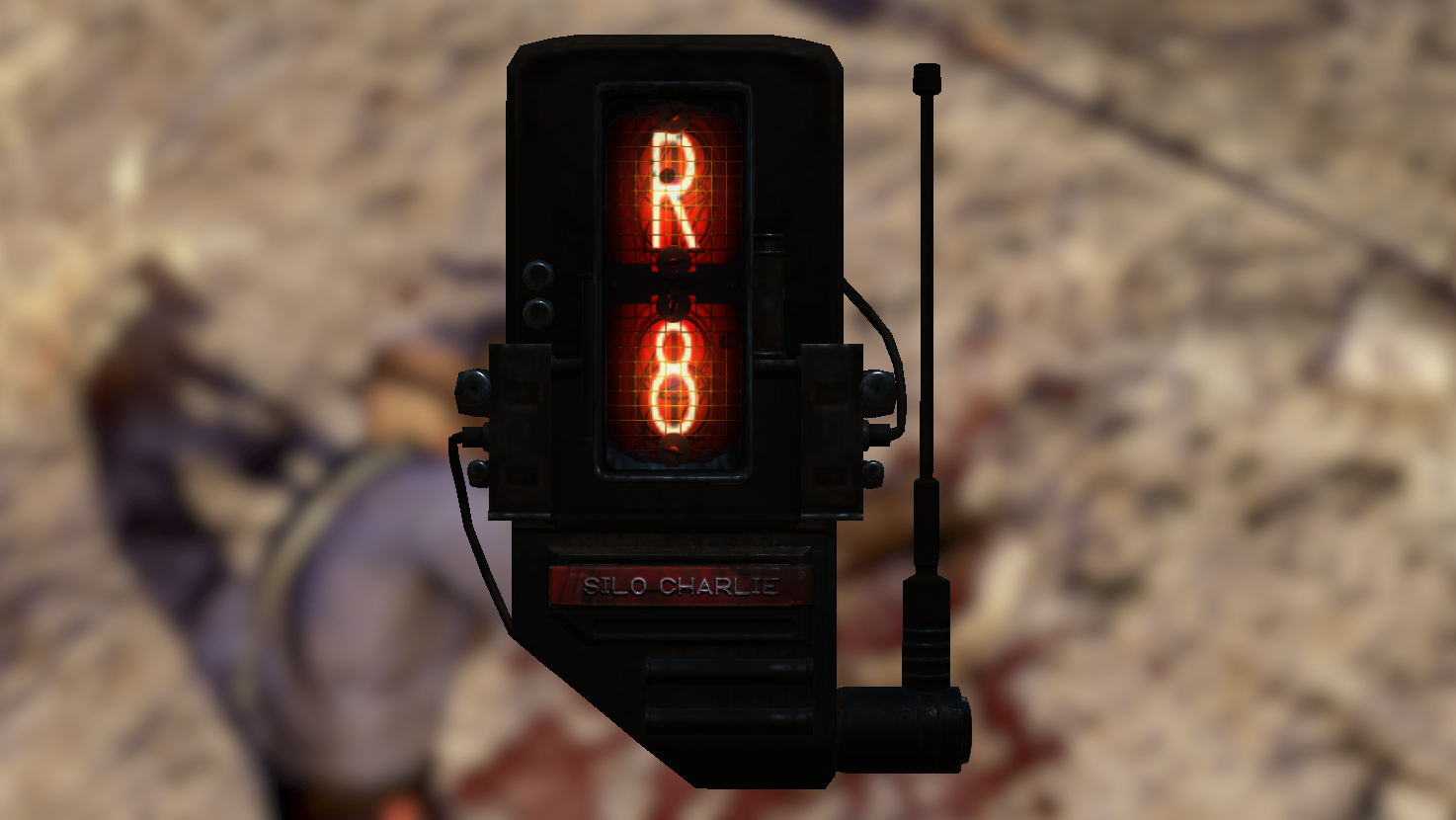 I’m sure there’s some gems to discover in this world, if I’d stuck with it for a bit longer. I’ve read that the wanted system is quite nice and some players are having a lot of fun as PvP bounty hunters. That might be right down my alley. But to have success at that, I’d have to level up my character quite a bit and I’m already really bored of the quests I’ve started so far. Even though the map is really interesting, many quests send you to locations you have explored already. And unlike every other Fallout game, you can’t just sweep in and pick up the quest items you need. That’s because this is an MMO and the locations can’t be cleared of enemies – they repopulate after a few minutes. Clearing the same building again and again gets old really fast.

The nuclear launches, a key plot point of the main quest, also sound really interesting. But to participate meaningfully, I’d need to grind even more and probably also collaborate with other players …and I can’t see that happening. As I’ve said at the beginning of this final part of my review: I’m done with this. And I don’t think I’m coming back, no matter what Bethesda has up their sleeve to try to entice players in the future. I think they fucked this up beyond all redemption. 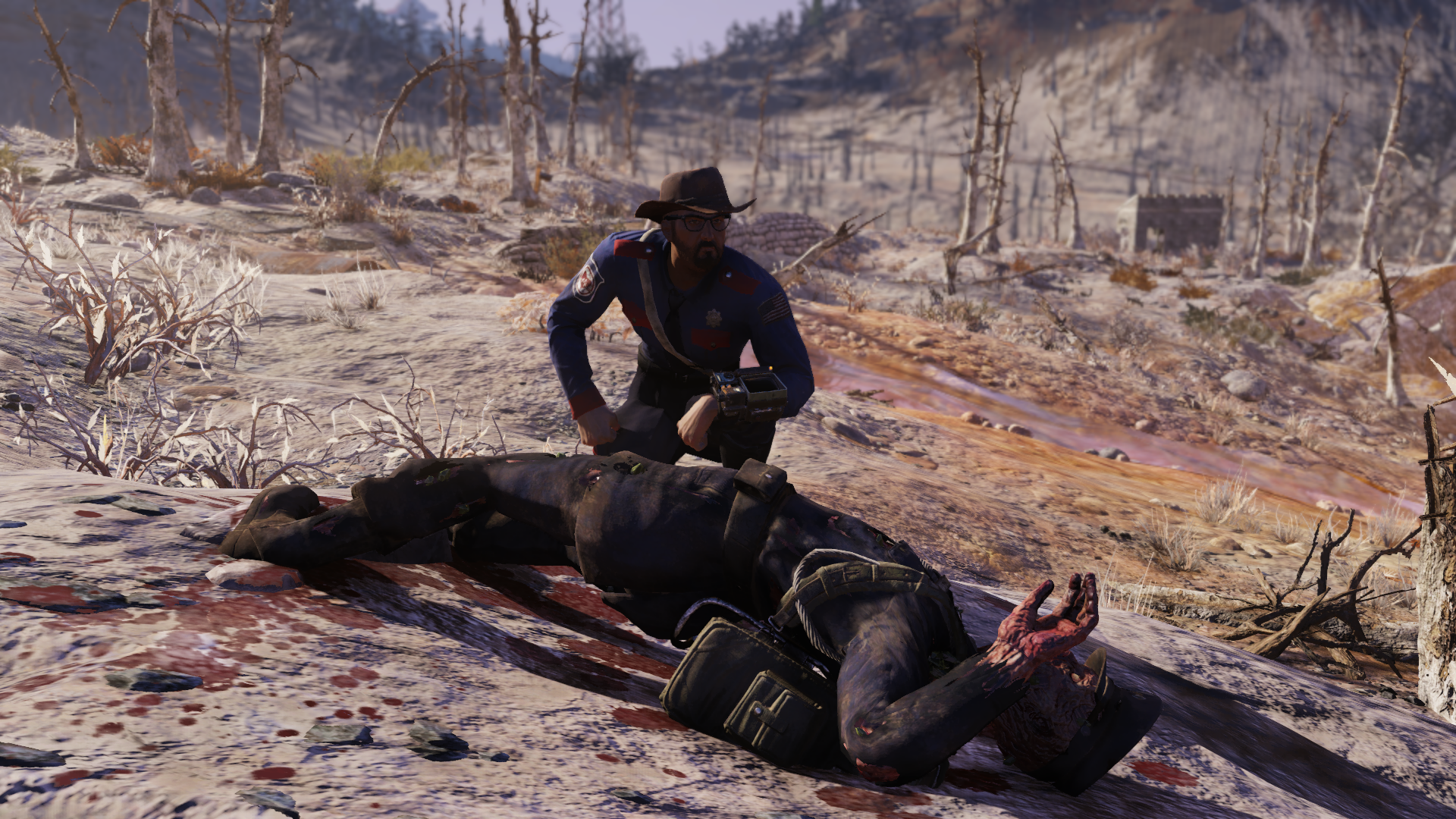 Two and a half weeks after its launch, Fallout 76 sits at an abysmal 2.8 (out of 10) for user reviews on Metacritic. The critics score at 54 (out of 100) is just as bad. I’m clearly not the only one who sees massive problems with this game. Another indicator for this is how empty the servers are these days. The game hasn’t even been out a month and the player count has already dropped to a fraction of those playing the game at launch, at least from what I can tell. Bethesda seems to have recognised this too when they discounted the game heavily, a mere week after launch. You can probably still pick the game up at a heavy discount, as the price has been dropping steadily.

The question is: should you? Probably not. Unless you read this whole review and still think you won’t mind the unsatisfying single player experience, the toothless multiplayer, the lackluster graphics and all the bugs, I’d probably skip it. Even if you’re very much a longtime Fallout fanboy like me, you could probably get much better value from your free time playing something else. Hell, even playing Fallout: New Vegas again would be better than this.

So, with this in mind, let’s get down to scoring this mess. 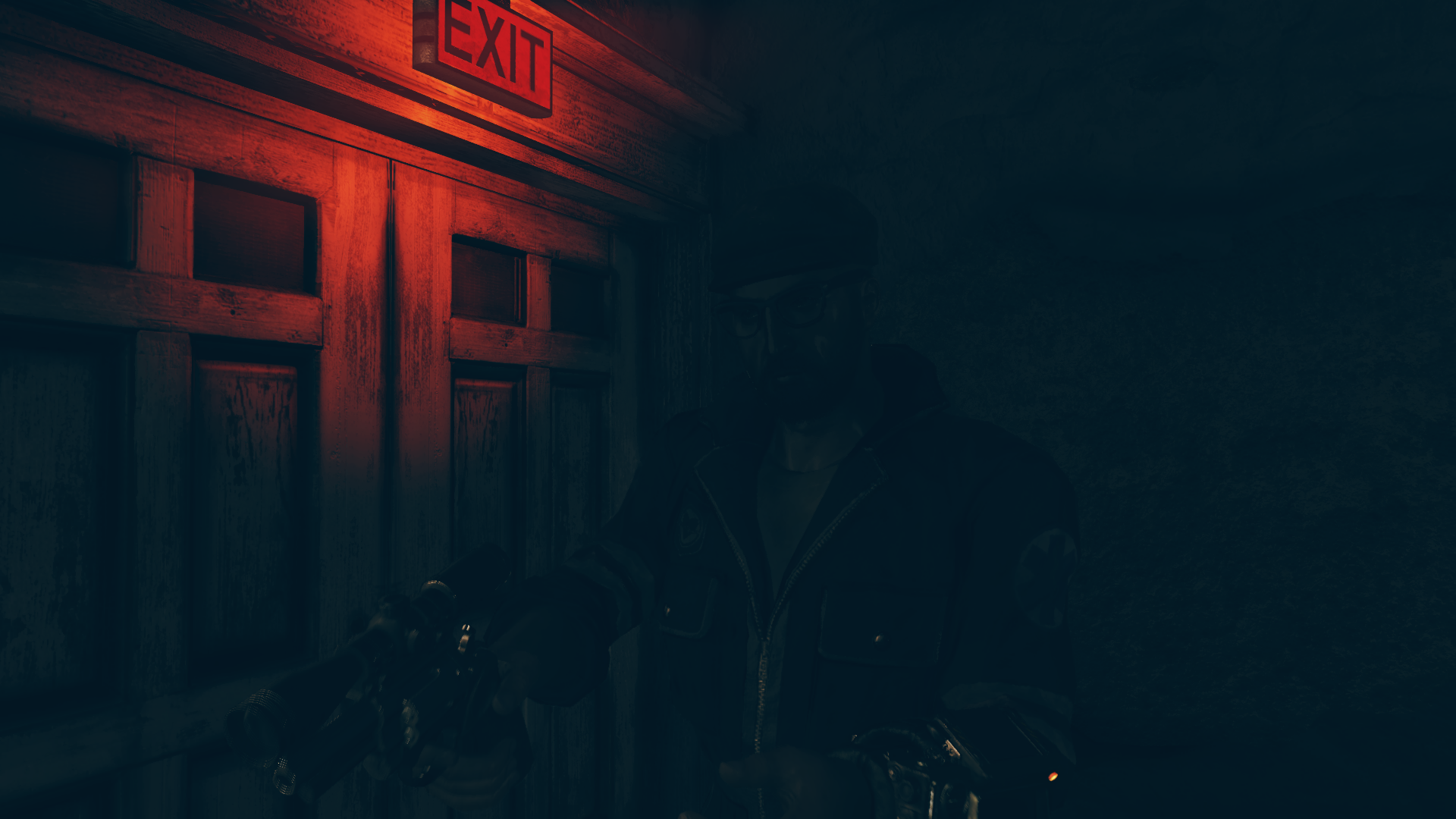 The world of Fallout 76 is incredibly big, detailed and well realised. But trying to have fun in this game is sabotaged massively by the questionable decision to remove any meaningful NPC interaction. Fallout is an RPG and these games are about story. The multiplayer framework they built is not good enough to tell meaningful stories, however. Players are left with either trying to enjoy the compromised single player experience or playing an almost generic feeling multiplayer shooter. The former is disappointing and the later raises the question why is this even a Fallout game?

Visually, the game does not improve in significant ways compared to Fallout 4. Most of the novelty comes from fresh environments and a greater variety in colour palette. Minor tricks with motion blur and depth-of-field effects aside, it is incredible how much this game resembles its predecessor. The world is a bright spot, but detailed worlds are a staple of the franchise and can’t be seen as a novum. That they increased the world size is also a given. All in all, from an artistic standpoint, Fallout 76 is nothing to write home about. It is well realised, but at the price it’s being sold, one would hope it would be. And it can’t keep up with modern games like Red Dead Redemption 2.

The decision to remove basically all NPCs from a story-centric roleplaying game is certainly bold. It doesn’t work, however. The developers also haven’t fully committed to either survival or multiplayer shooter mechanics. Instead, they’ve decided to build in all the trappings of a single player Fallout aside from proper NPC interaction. This misleads players into thinking the game can be played like Fallout 3, 4 and New Vegas; only to get thoroughly disappointed a few hours in. As far as executing a clear vision for a game is concerned, this is an abysmal failure. The game is a horrible muddle of concepts and ideas that can’t make up its mind what it wants to be.

Bottom line: Even as a die-hard Fallout fan, you might be OK with not having played this. If you must buy it, try to get it on a heavy discount – which schouldn’t be hard pull off.