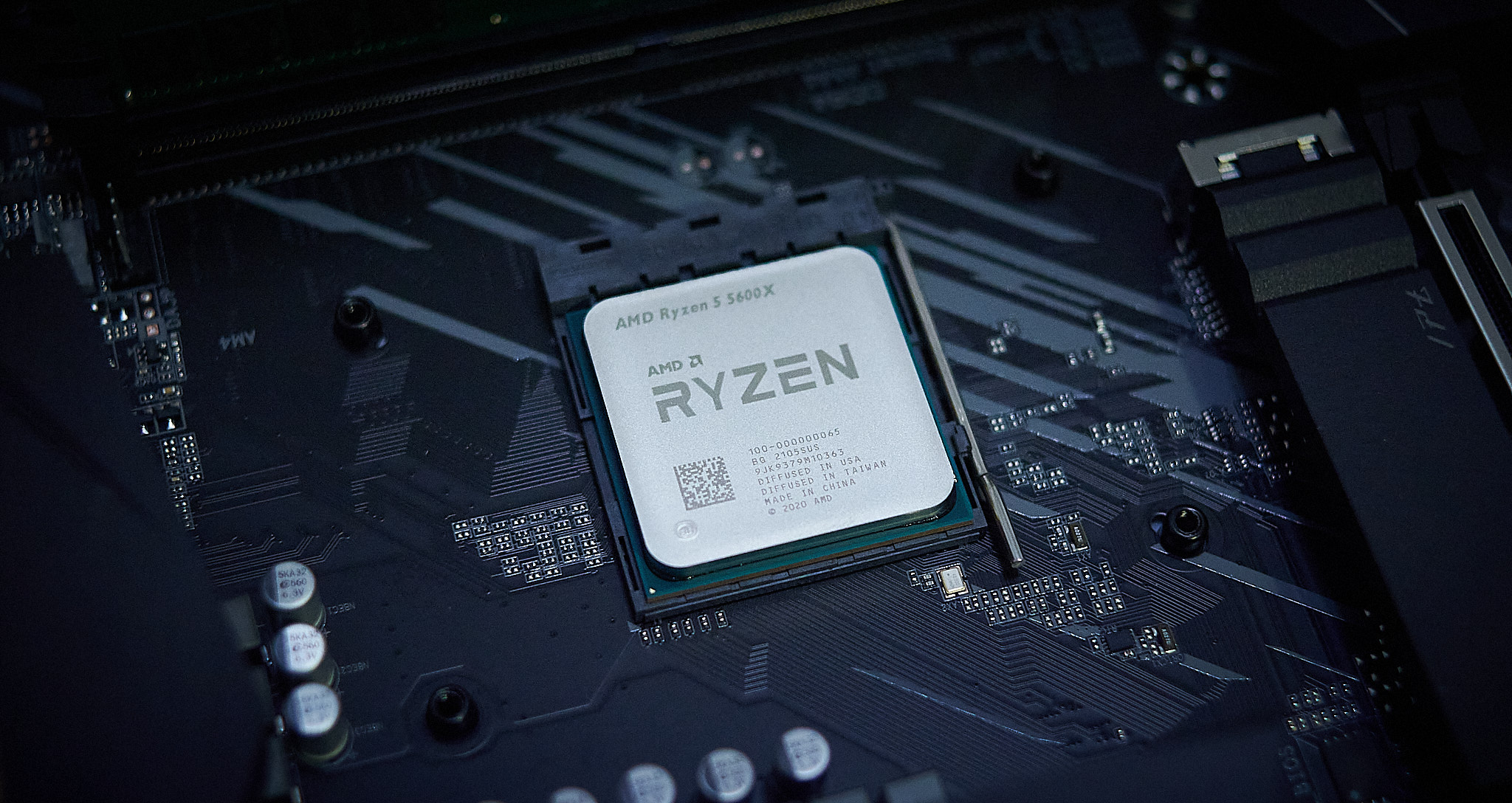 You might have been wondering why you haven’t heard much from me for a week or so. That’s because I took some days off to upgrade my PC. Here’s the result.

About five and a half years ago, I built myself a state-of-the-art gaming PC in what I named #OperationLion (all my computers are named after Warhammer 40K primarchs, this one after Lion El’Jonson). The system – based on an Intel Core i5-4440 and an nVidia GeForce GTX 980 with 16 GB of RAM in a Be Quiet Pure Base tower case – has been running flawless ever since. It has few bells and whistles, no extraneous LEDs but decent cable management, excellent and very silent cooling and enough power to run every game I’ve thrown at it in five years. Cyberpunk 2077 was the first game I played since I built this PC, especially coupled with streaming it , that showed some serious performance limits of the hardware. Which made me think about upgrading the system for the first time. 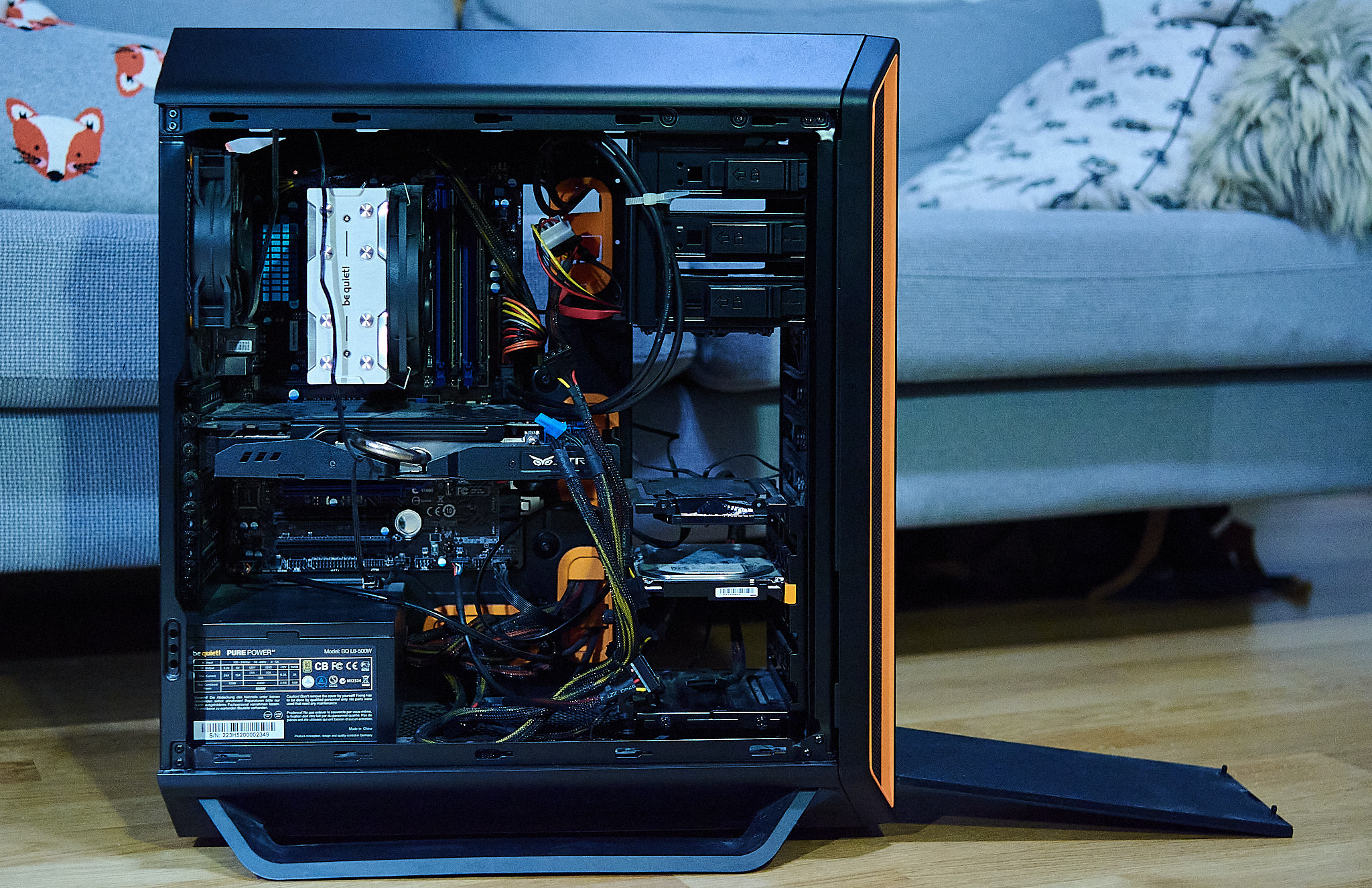 My gaming PC before the upgrade. Yes, that’s two SSDs gaffer-taped together, because why not?

When I built this PC, had originally planned to upgrade the graphics card around this time. But graphics card prices and availability being what they are at the moment, that’s pretty much out of the question. Instead, I got the idea to upgrade the CPU. When I built this PC, processors weren’t much of a bottleneck in gaming – you basically needed a quadcore, any quadcore, and you were fine. And I never ran into any CPU issues with games1. But some things have changed since 2015. For one thing, AMD has presented the first real challenge to Intel (performance-wise) on the consumer CPU market in decades. And some games, like Cyberpunk, are using new technologies that take advantage of more CPU power in gaming PCs – and modern consoles. For Cyberpunk 2077 specifically, the way it scales assets and streams them from disk on the fly is very processor intensive.

Things have also changed on my end. These days, I stream a lot, which I didn’t do back in 2015 when I was still working as an employee eight hours a day. Turns out streaming uses a lot of extra CPU resources on the side, especially for some rendering tasks that can’t be offloaded to the GPU. I also use this system for everything now, not just gaming and audio production. It became my 24⁄7 work computer at the start of 2019 when I stopped working in an office permanently. So… the time had come to upgrade the heart of the Lion, its CPU. 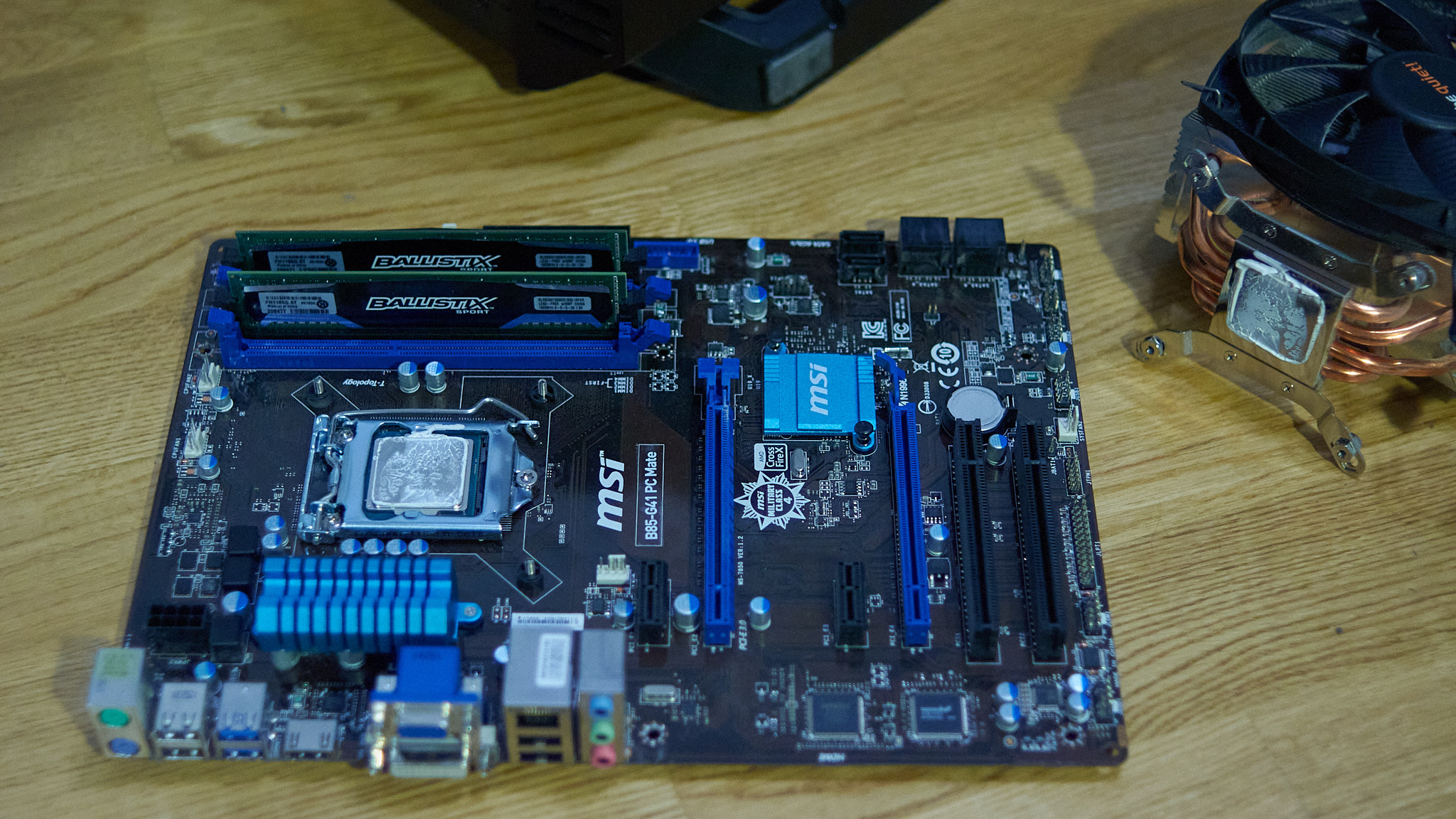 I’ve decided to go with an AMD Ryzen 5 5600X. Now, I’ve had one PC or another since my very first 286 in 1989, but I’ve never used a CPU from AMD until today. Kinda weird, but here we are. I went with an B550 Aorus Elite V2 mainboard based on the latest “Optimaler PC” build

by my former colleague Christian Hirsch at c’t. His base build uses a Ryzen 5 3600, which I decided to upscale a bit. The board itself is compatible up to the Ryzen 9 5950X, so I got some headroom if I want to upgrade the CPU again in the next two or three years – I figured that was a sensible future proofing measure.

Changing from a five year old Intel CPU to a modern AMD one did not only necessitate a change of mainboard, however. Since Lion used DDR3 memory up to this point, I also had to swap that to DDR4 DIMMs compatible with my new board. I decided to double the RAM to 32 GB, with an option of easily going up to 64 GB later. Naturally, I kept my Strix GTX 980 and my Linux and Windows SSDs and the data storage HDD. I also reinstalled Windows, because to be honest, after five and a half years and one SSD expansion, the installation was a mess. My Linux SSD I kept intact and just had to reinstall the bootloader after the Windows setup was done. 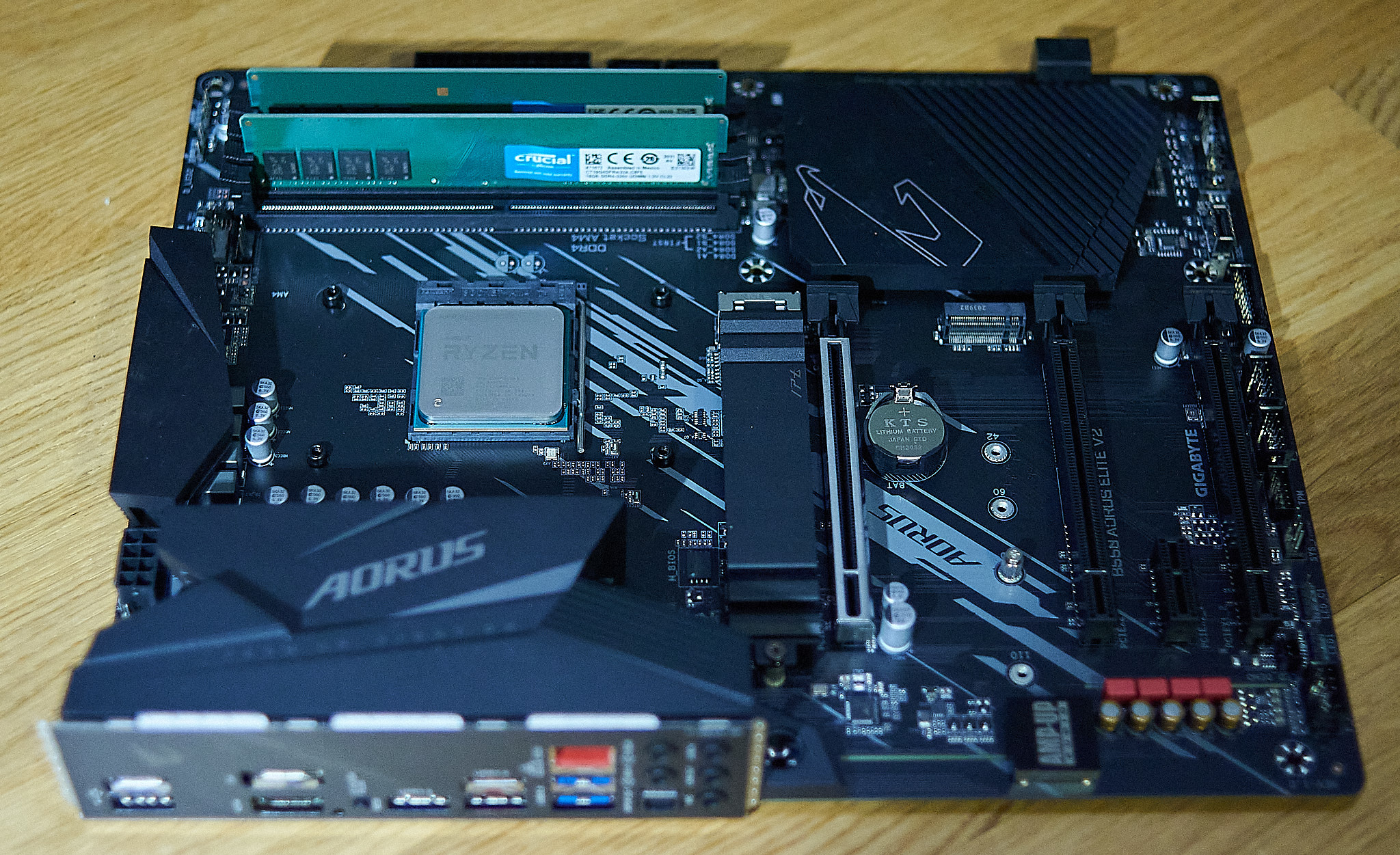 The new mainboard before installation

The whole process went more or less smooth aside from one hitch which I hadn’t anticipated: My existing Be Quiet Pure Rock cooling unit didn’t fit the mounting bracket for AM4 socket processors. Of course it didn’t. Which meant to get the system up and running and reinstall Windows and all Windows apps, I had to install the cooling fan that came with the processor. That fan is crap. It’s loud (very bad if you record podcasts or do live streams) and doesn’t cool the CPU very well. So I went with it for the time being but immediately ordered a replacement Pure Rock 2.

When the new cooler arrived yesterday afternoon, I took the case apart again, took the AMD cooler off and fitted the new one. The system now once again runs as cool and as quiet as I am used to. A word of advice, people: Never skimp on you CPU cooler! A good cooling unit is worth spending a few extra eurodollars on. 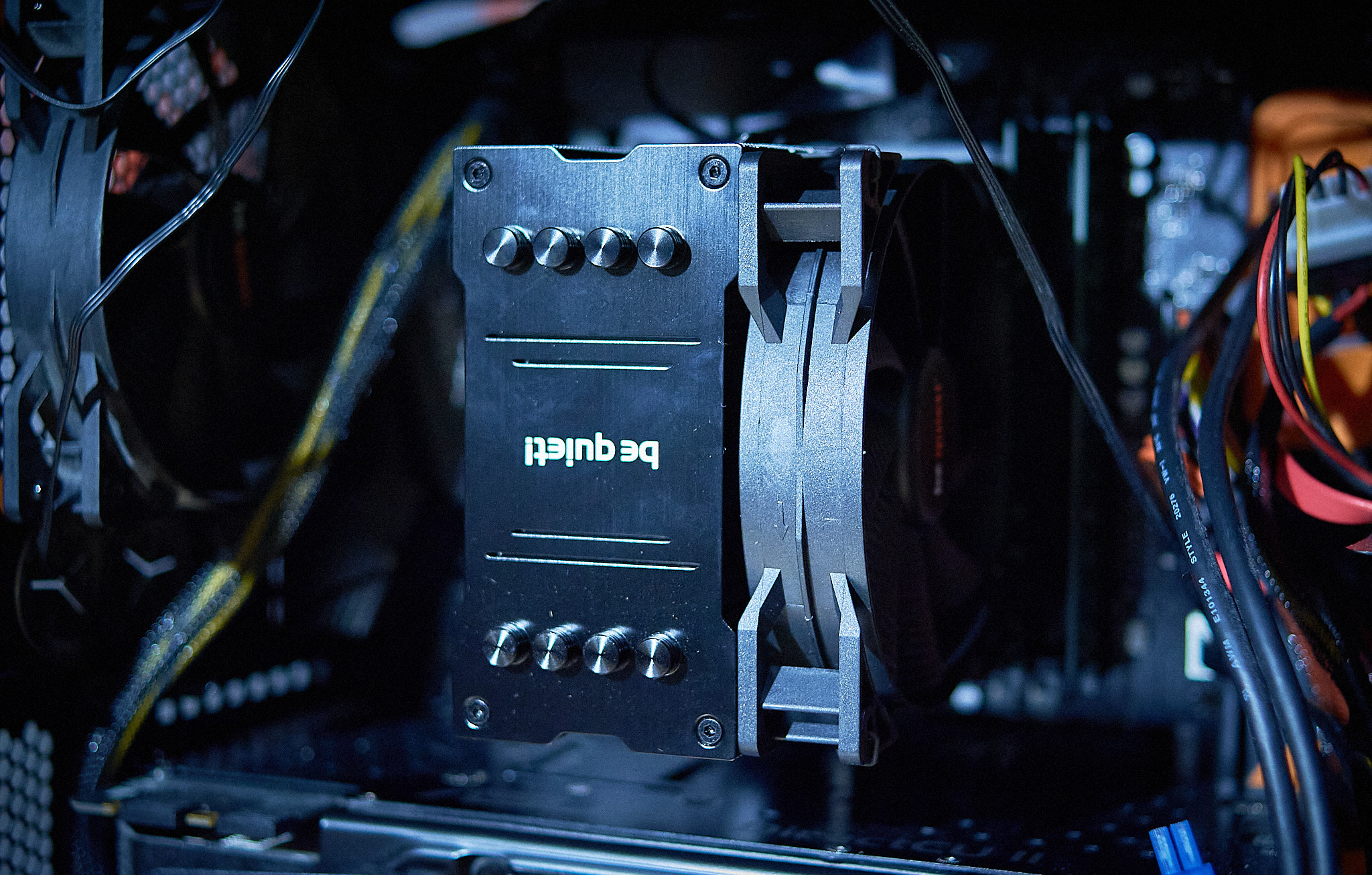 The new cooling unit mounted in the system 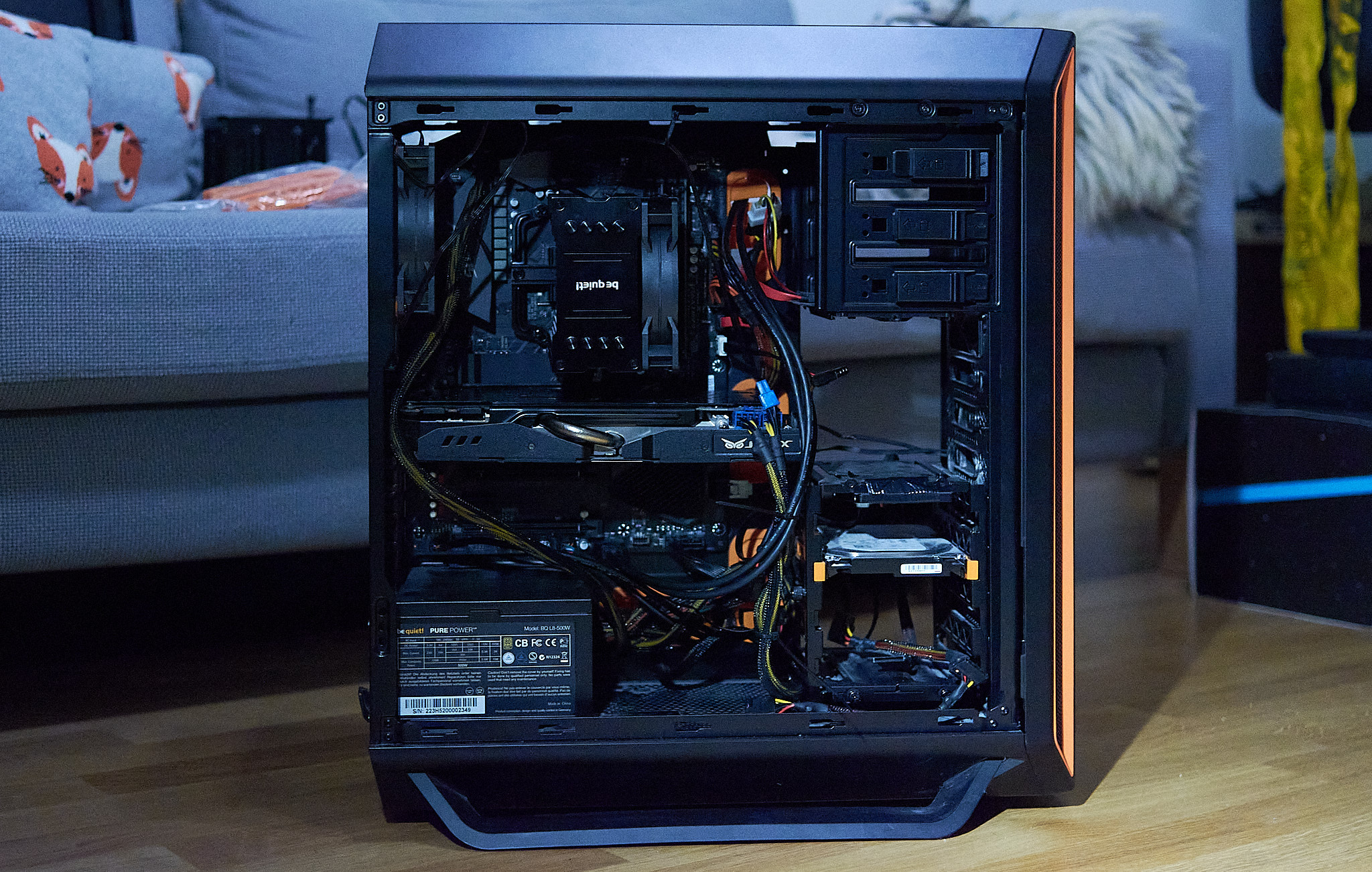 My gaming PC after the upgrade. It’s a bit Millenium Falcon in there, but hey, it runs cool and works well.

Got a comment? Join the conversation by logging in with a Matrix account. (Get one here.)
Read other posts
← Golf GTI of the Cyber-Future New V, New You →