Some Thoughts on Elden Ring What it feels like to play this game if you’ve never even touched a From Software game before.

I’ve never played a From Software game. If you’ve never heard of this company, their games are generally referred to as “Souls games” or “Souls-like games” – a reference to the Dark Souls series – and they are incredibly difficult. Which is why I’ve never played them. That and, well, the fact that the last one they did which I found really interesting, Bloodborne, isn’t available on PC. But now they’ve come out with their newest title, Elden Ring, and it’s on the PC from the get go. It’s gotten incredibly favourable reviews and George R. R. Martin was involved in the world building. So I’ve wanted to play it ever since I first heard about it, but I had to upgrade my graphics card to be able to run it. Now that I’ve bankrupted myself for a 3080 Ti, I decided that I might as well try Elden Ring, too. To understand where I am coming from with this game, you need to understand that I usually play video games on the easiest difficulty setting. A lot of people find that surprising, but I’ve never cared about the constant judgemental comments. And I actually think more people are doing it than you’d think, they’re just afraid to admit it in public because it’s some sort of stigma in the video game community for some silly ego-driven reason I’ve never fully understood. Probably something about nerds having nothing else in their life they can derive self-esteem from. I’ve never had this problem and since I mostly play games to roleplay, to experience the stories and to relax myself, I usually start a game on the easiest difficulty setting and switch it higher when I get bored – which is the opposite of the generally accepted approach, I think.

That doesn’t mean I don’t play hard games. Escape from Tarkov, my main shooter game, is one – if not the – toughest games in the genre. And some games I really enjoy, like Deathloop, have no difficulty settings at all because the player is meant to regulate the difficulty of the game by their approach to playing it. Basically, I play different games differently. And sometimes I play hard games. It’s just less relaxing and more of a self-help exercise in patience for me at that point. 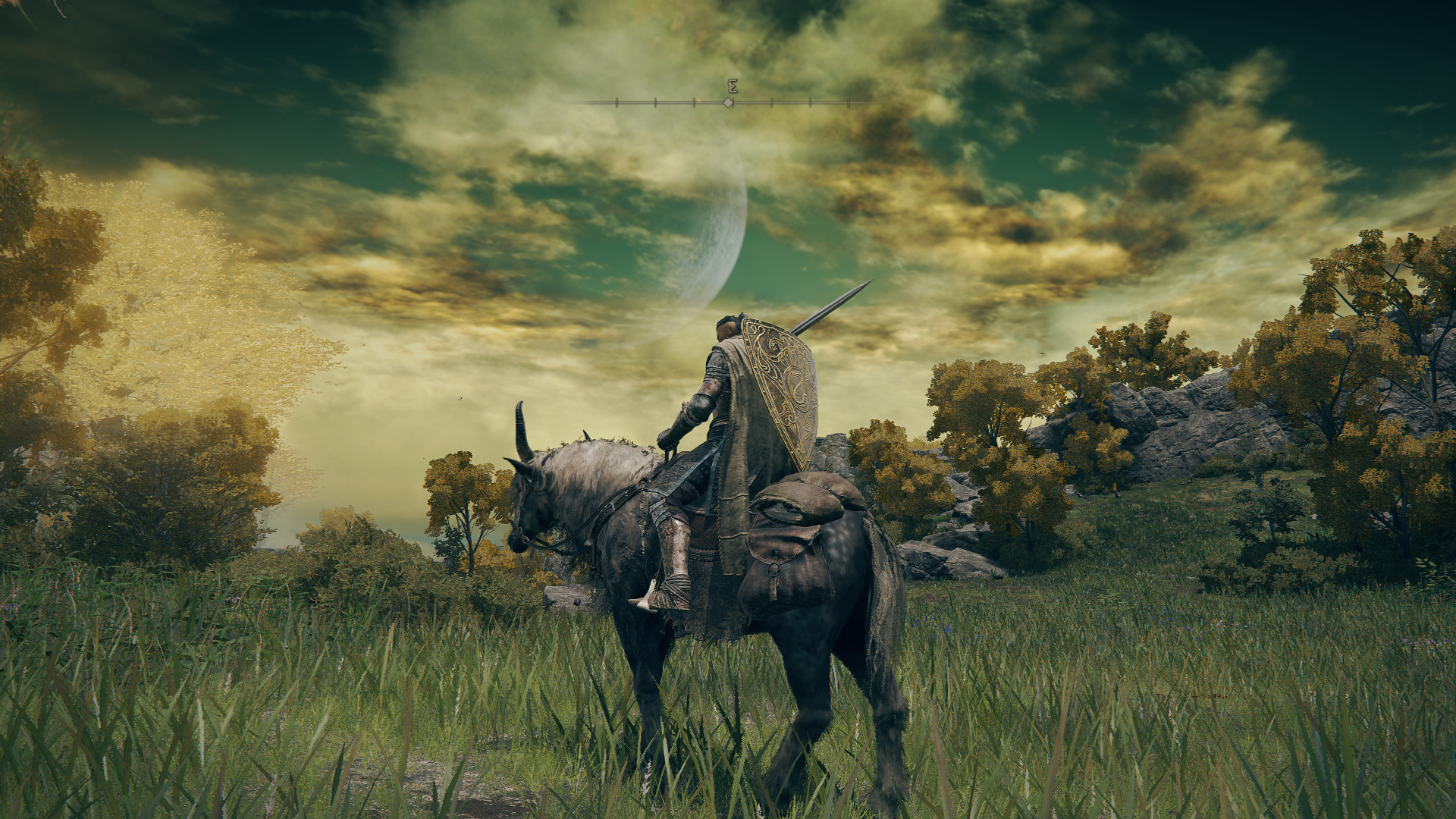 Now, Elden Ring is different. From Software games are in a whole nother league of difficult. Their fans usually maintain that they aren’t really that difficult, but I think that’s nonsense. That’s like a Tarkov player saying that Tarkov isn’t extremely frustrating at times. It is. And it’s an integral part of that game. Even the best and most experienced players feel it – and freely admit to it – at times. Just watch their streams playing the game. In the same way, punishing difficulty and masochistic game design is part of the Souls games. But it manifests itself a bit differently than you’d expect by what you’re generally told about them..

Speaking of Elden Ring, which is the only example of these kind of games I have played and thus the only one I can offer insights on, this difficulty is less about reflexes than many people would have you believe. Fighting a boss in Elden Ring – and believe me, even some ordinary enemies on the overworld map feel like bosses – is less about pushing a button at exactly the right time than it is about knowing when to push it. The animation sequences in this game are quite long and involved. Which means you usually have a pretty long window in which to execute what you want to do. A window that is more than big enough for an old man with shitty reflexes like me. The difficulty is not in that. The difficulty is in finding out what you need to do and then doing it consistently. And believe me, that’s actually harder than it sounds. 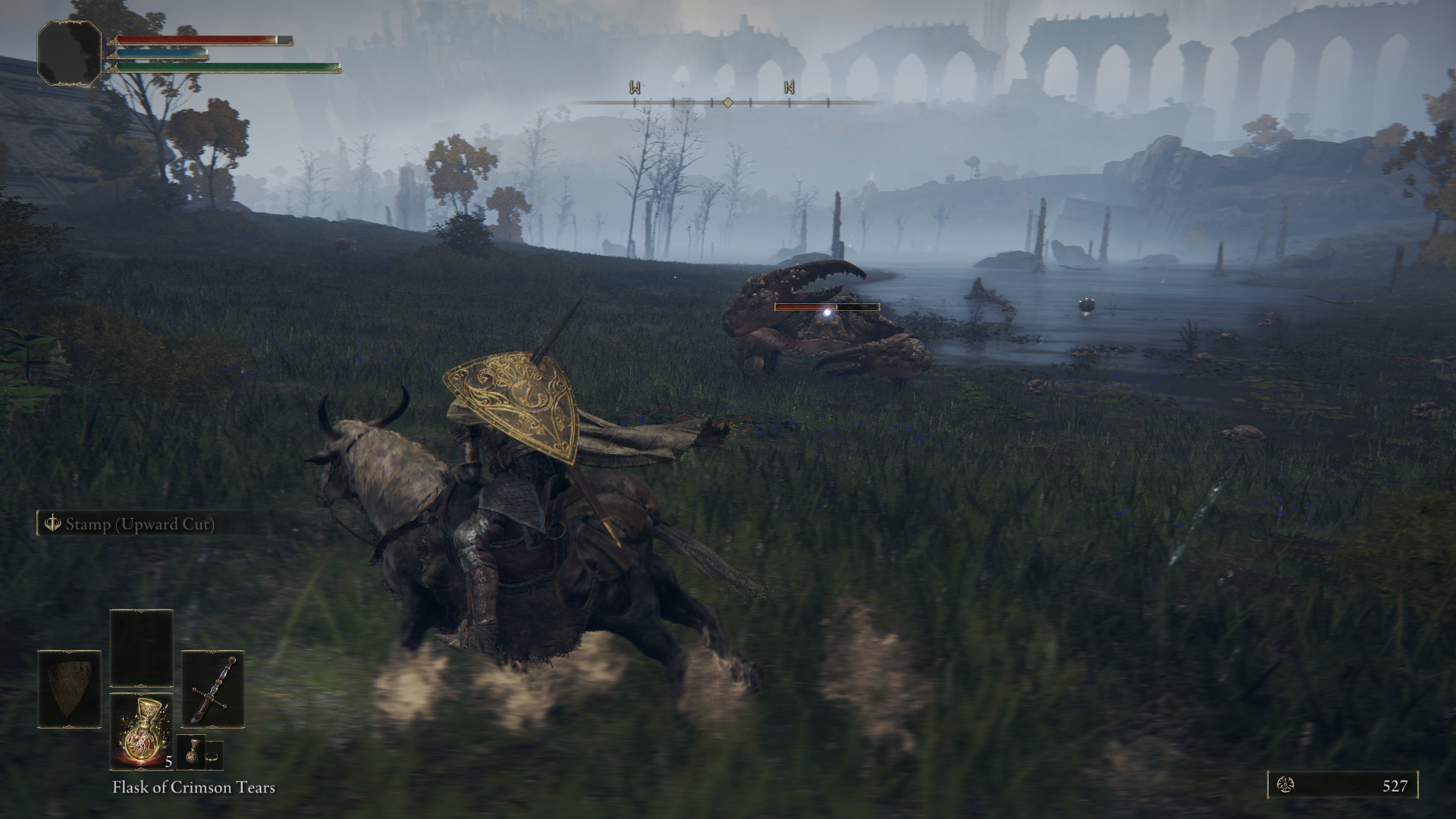 First, you need to die a lot. Because you need to observe how the enemy fights. And for that you will have to fight them over and over and over again, dying every time because you have no idea what you are doing yet. And enemies generally will kill you with one to three hits. Then, you’ll have to figure out a strategy based on what you have observed. With a proper boss, this involves learning all of their attacks. When they do them, how they do them, where they are are vulnerable while they do them, where you are vulnerable when fighting back and so on… This process is hard, because you need to pay attention and not let your frustration overwhelm you.

The dying over and over again part actually isn’t that bad for me. If you regularly play Escape from Tarkov, like me, you get pretty dulled to the frustrations of dying without really understanding why and just soldiering on until you start to pick up on what’s happening to you. The strategy part is actually where my problems with Elden Ring come in. I have an incredibly hard time remembering all the attack patterns and visualising at what range they hurt me and at what range I need to be to hurt the enemy. I’ve made this harder for myself by playing a pure melee build. Something with optional range or an entirely range-based character like a wizard would probably have been easier to handle. But those are the chips we’ve been dealt. Accordingly, I haven’t been able to beat the first boss, Margit the Fell Omen, yet. And I’m more than twelve hours into the game now. 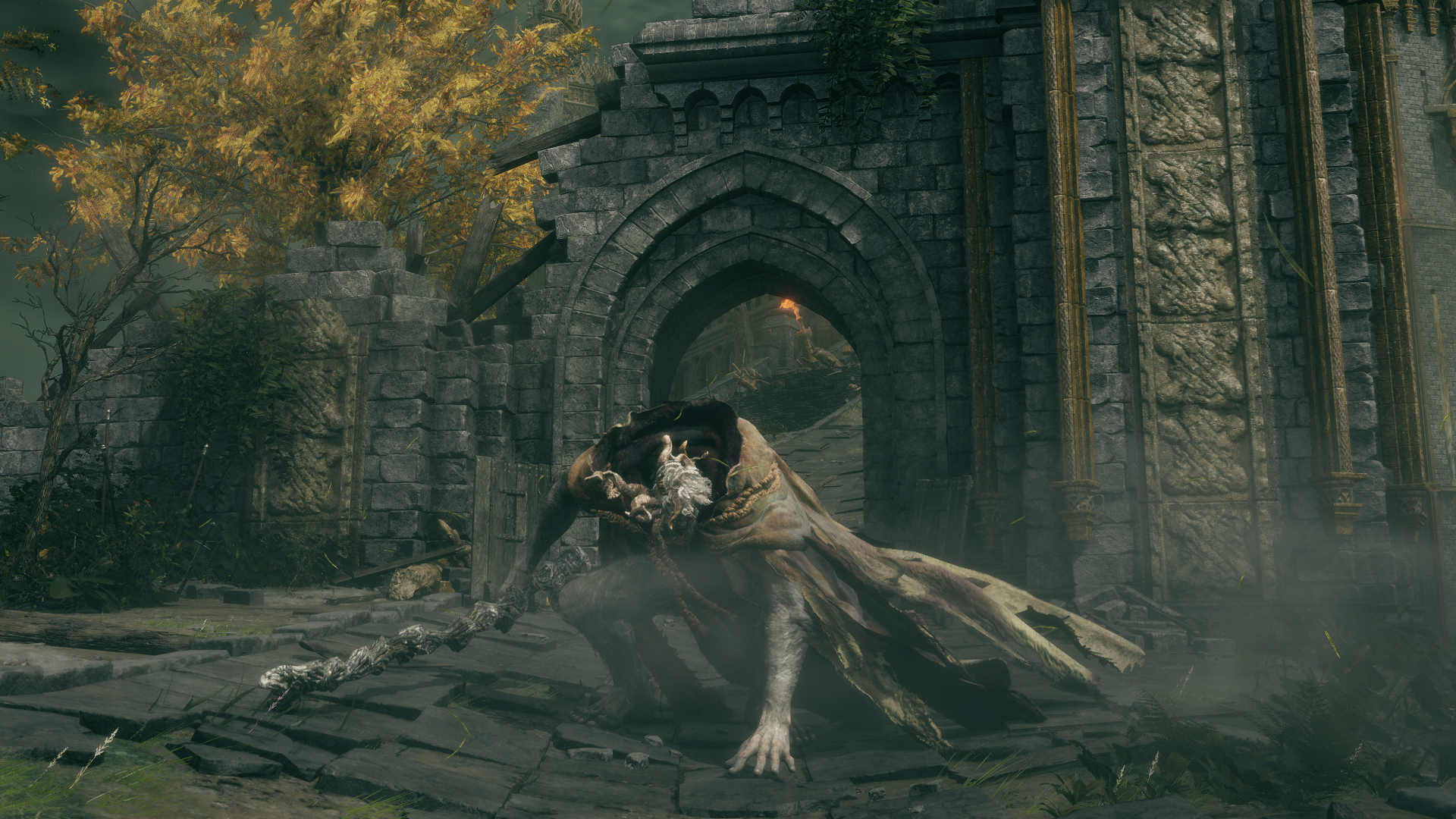 In this situation, Elden Ring is actually less punishing than previous From Software titles, because those were always based on limited maps linked in a hub-and-spokes design. But since Elden Ring is an open world game, you are free to go around bosses and explore other parts of the map when you get stuck. This allows you to level up and makes the boss fight easier. In a pinch, you could go and grind for several dozens of hours, become really OP in respect to the boss you can’t deal with, and then kill him with a couple of strikes. With other words: You can substitute skill with patience. You could do that to a degree in other Souls-like games but Elden Ring makes it a lot less annoying because you don’t have to grind the same limited part of the map over and over and over again.

At this point, you’re probably asking why I would put myself through all of that if I usually prefer to take it easy when playing games. It’s because I appreciate beautiful games and amazing stories. And Elden Ring sure is beautiful. In a grungy, horrible and weird way that’s right down my alley. And it has a very intriguing story. Like all From Software games, it’s incredibly obtuse. Part of why these games are so hard is that they tell you almost nothing about who you are, what you can do and how to play the game. You need to discover it for yourself. Which means you will miss a lot of things. Without streaming the game and having chat there, I would have walked right past the tutorial for example. Luckily, if you don’t have Twitch chat when playing the game, you can just search for questions you have online. And if you’re playing the game on your own, you should definitely be doing that. Don’t be shy to google things. This game is hard enough as it is without you having to discover all of its arcane secrets and little quirks on your own. If you want to make it harder on yourself, you can choose to do that, of course. But if you ask me, that’s a little too much. Especially if you have a life aside from video games. 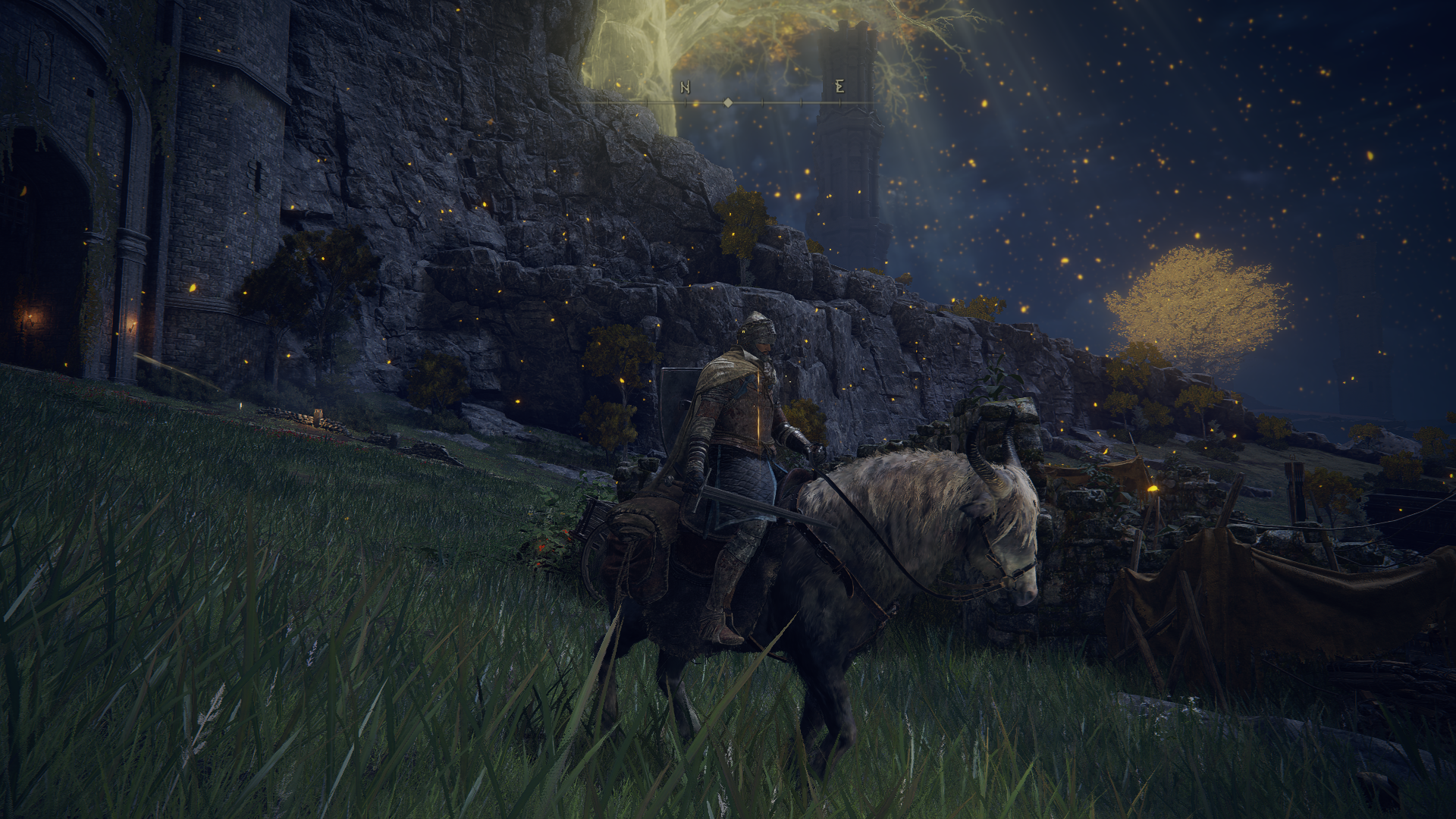 This also applies to the story. The game itself tells you very little. You have to discover clues in the world and piece it together for yourself. And I love this kind of thing. Which is why I consciously don’t watch any other players playing this game and will avoid story spoilers in articles and such if I can help it. That’s why I’m putting myself through these mechanics. For the story and the weird vistas. And because it’s a challenge, of course. And even though it might take me longer than many other people, I do enjoy giving it a try.

I think the important part with games like this is to not get frustrated that other people are better at them than yourself. Other people will always be better than you at something. I might be slower and dumber at games like this than a random dude in my chat, but I’m probably better at writing than that guy. Or at baking bread. Whatever. Don’t let other people get you down. Take it at your own pace and approach it however you want to – even if it’s silly and you’re just punishing yourself with it. No kink shaming, okay?

And it’s also important to take breaks when you get too frustrated. Speaking for myself, I’d probably burn out on this thing very quickly otherwise. In poker, there’s a concept called tilt.

Tilt is a poker term for a state of mental or emotional confusion or frustration in which a player adopts a less than optimal strategy, usually resulting in the player becoming overly aggressive. Placing an opponent on tilt or dealing with being on tilt oneself is an important aspect of poker. It is a relatively frequent occurrence due to frustration, animosity against other players, or simply bad luck.

Tilt is also common in other games, especially chess and esports titles. Tilting in esports causes players to “lose control due to anger”. The most extreme reaction is termed a “ragequit”, angrily leaving the match or quitting the game, physically turning off the device or breaking a part like a monitor or control device by smashing it.

You will tilt with games like this. It’s important to recognise when that is happening and to deal with it by going to do something else for a while. Either in game – leaving that pesky boss be and looking for another challenge or some relatively chill mob faming – or turn it off and go do something else in real life. You will come back fresh, probably with a new perspective and be better for it. I also think it’s totally legitimate to cheese difficult enemies or look up guides and guide videos online. This game is very hard. As I see it, the challenge is to complete it. How doesn’t matter. It’s kind of like fighting a war. Everything’s fair in love, war and Souls games.

If you want to see how it’s going for me, I’m streaming the game live on Twitch whenever I play it. Those streams get exported to my YouTube channel after the fact. Here’s the first twelve-plus hours of me banging my head against this game:

If I keep at it, I will probably write more about the game, too. That will end up here on the blog, as usual. I hope I could give you some insight in what it feels like to play Elden Ring if you've never played a Souls game before. Maybe it helps you if you're trying to decide whether to take the plunge or not.

Got something to add? Comment on this post in the fab.industries forum.
Read other posts
← Link Note →