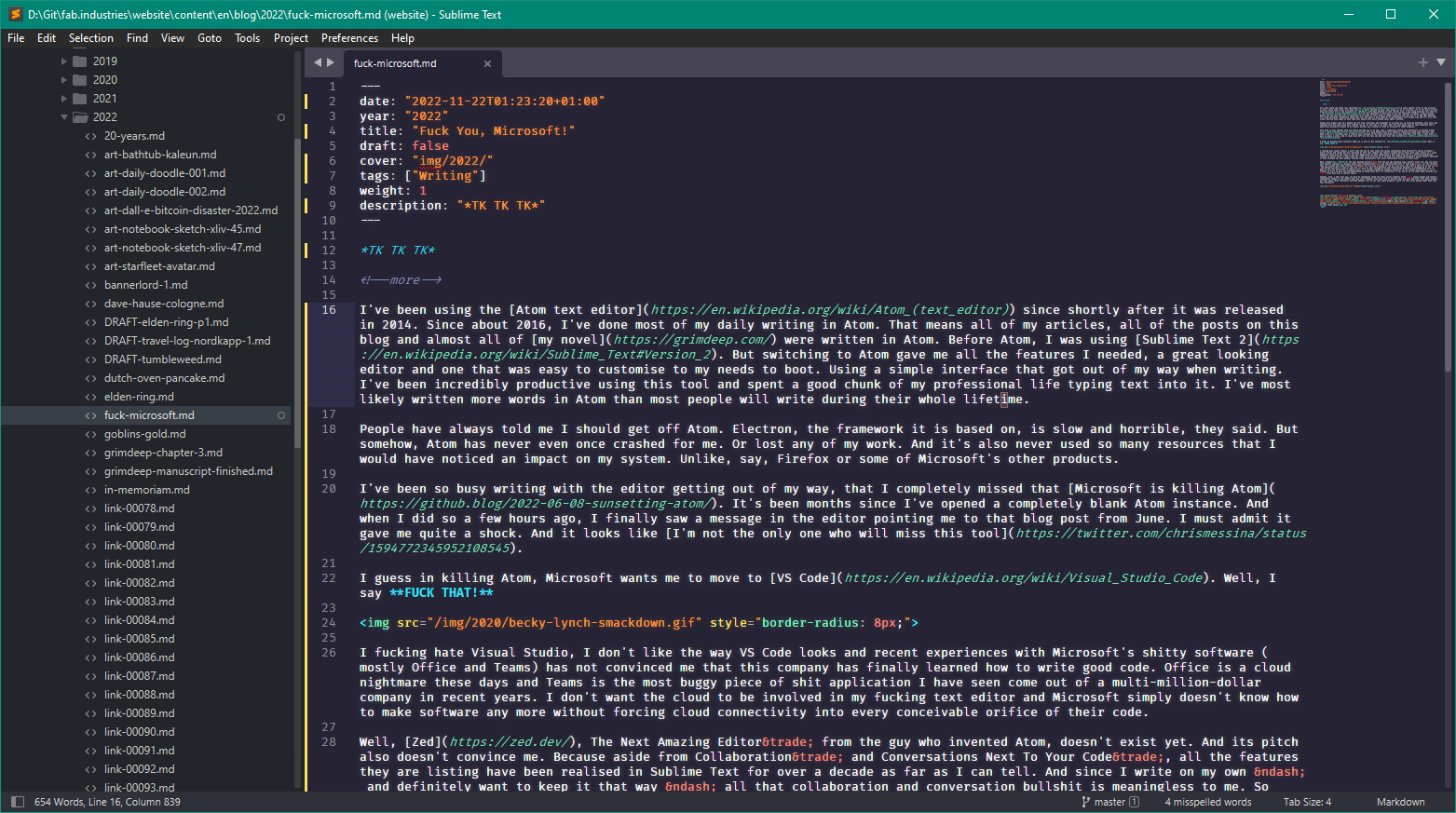 Microsoft killed my favourite text editor to make me switch to their other product. Only over my dead body, assholes!

I’ve been using the Atom text editor since shortly after it was released in 2014. Since about 2016, I’ve done most of my daily writing in Atom. That means all of my articles, all of the posts on this blog, all of my podcast show notes and almost all of my novel were written in Atom. Before Atom, I was using Sublime Text 2. But switching to Atom gave me all the features I needed, a great looking editor and one that was easy to customise to my needs to boot. Using a simple interface that got out of my way when writing. I’ve been incredibly productive using this tool and I’ve spent a good chunk of my professional life typing text into it. I’ve most likely written more words in Atom than most people will write during their whole lifetime.

People have always told me I should get off Atom. Electron, the framework it is based on, is slow and horrible, they said. But somehow, Atom has never even once crashed for me. Or lost any of my work. And it’s also never used so many resources that I would have noticed an impact on my system. Unlike, say, Firefox or some of Microsoft’s other products.

I’ve been so busy writing with the editor getting out of my way, that I completely missed that Microsoft is killing Atom. It’s been months since I’ve opened a completely blank Atom instance. And when I did so a few hours ago, I finally saw a message in the editor pointing me to that blog post from June. I must admit it gave me quite a shock. And it looks like I’m not the only one who will miss this tool.

I guess in killing Atom, Microsoft wants me to move to VS Code. Well, I say FUCK THAT!

I fucking hate Visual Studio, I don’t like the way VS Code looks and recent experiences with Microsoft’s shitty software (mostly Office and Teams) has not convinced me that this company has finally learned how to write good code. Office is a cloud nightmare these days and Teams is the most buggy piece of shit application I have seen come out of a multi-million-dollar company in recent years. I don’t want the cloud to be involved in my fucking text editor and Microsoft simply doesn’t know how to make software any more without forcing cloud connectivity into every conceivable orifice of their code.

And, well… Zed, The Next Amazing Editor™ from the guy who invented Atom, doesn’t exist yet. Its pitch also doesn’t convince me. Because aside from Collaboration™ and Conversations Next To Your Code™, all the features they are listing have been realised in Sublime Text for over a decade as far as I can tell. And since I write on my own – and definitely want to keep it that way – all that collaboration and conversation bullshit is meaningless to me. So here we are, I’m going back to Sublime. I’ve already renewed my license, installed it and started customising it to my liking. It isn’t as easy and straightforward as using Atom, but it’s coming back to me. And as an old Linux hand, hacking raw config files does have a certain charm.

Goodbye, Atom. I will miss you. You will be remembered among the other useful products (like Google Reader, Jaiku and having a fingerprint reader on the iPhone) that big tech companies took away from us because they are shit and don’t care about people, only about their constantly shifting agendas. Let me say this again because I can’t say this often enough right now: Fuck you, Microsoft!

What's your opinion on this? Leave a comment in this forum thread.
Read other posts
← Link An expressionist oil painting of the great Bitcoin disaster of 2022 →