Welcome! Here’s issue 49 of FOXTROT/ALFA for Tuesday, 17 December 2019 with your daily tech news. Man, I gotta say, I love the ALLCAPS feel of the new name. Typing in ALLCAPS is just so very satisfying! Today, I bring you a mixed bag of tech and policy topics with some Greta sprinkled in for the fun of it.

Mac Threats on the Rise

According to anti-virus company Malware Bytes, Mac malware now accounts for 16% of all malware detections. They claim that for the first time ever, Mac malware was in the top five of most-detected malware worldwide.

In fact, Mac malware represented the second- and fifth-most detected threats. The Malwarebytes detection ranked as the second-highest of 2019 is a Mac adware family known as NewTab, clocking in at around 4 percent of our overall detections across all platforms. NewTab is adware that uses browser extensions to modify the content of web pages.

In fifth place, at 3 percent of the total detections, we see a detection named PUP.PCVARK. These are a variety of potentially unwanted programs from a particular developer, most of them clones of Advanced MacKeeper.

To be fair here, these don’t sound as serious as most run-of-the-mill Windows threats.

Significant reporting by US media outlets has led to a rise in attacks on doorbells and cameras by Amazon subsidiary Ring. These are generally hacked because people re-use login credentials that were exposed in a password breach elsewhere. In several cases hackers gained access, spied on families and woke them up with the alert siren before making fun of them and swearing at their children.

What’s more disturbing however, as far as I am concerned, is the fact that police regularly uses footage from these devices without warrants. If you use the cloud features most people buy these things for, you most likely agree to terms of service that allow Ring to hand the stored video and live feeds off to law enforcement. They even share data with police officials very liberally that tells police where Ring devices are installed. And to top it all off, cities like the municipality of Gouda in the Netherlands are now subsidising these devices significantly if citizens allow the police to access these cameras. Scary shit.

I wrote a story for Heise

that goes into more detail on this, if you’re interested and speak German.

Nothing to See Here

Bless Greta and her PR team. She’s now actually acting surprised that a tweet designed to get attention actually got attention. And of course, if you suggest that it was a PR move, you’re a conspiracy theorist. Of course. Textbook deflection. 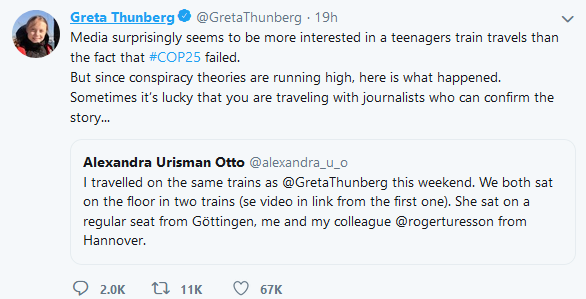 Side note: A few years ago I would have trusted that journalist corroborating her story. But these days, with many journalists actually seeing themselves as “activists” – and thus presumably bending the facts for some greater good – you can’t afford to be trusting anymore. Go ahead, call me a conspiracy theorist because I’m actually looking critically at things in pursuit of the truth.

Android to Get Automatic Dark Mode

During the heady beta days of Android 10, Google showed off a feature that would allow users to automatically activate Dark Mode depending on the time of day. Sadly, despite an enthusiastic reception, it never made it into the finished product, due to several technical hurdles. However, according to a company representative, Google plans to bring it back in a future update of the mobile operating system.

Yes. News outlets are now writing whole articles on features that change the colour of a phone’s UI. Welcome to 2019!

In other Android news, app developers are reporting a massive loss of user data by apps that use WebView triggered by an update to Chrome 79.

A change to the location of profile data in Chrome 79 on Android, the new version rolling out now, means that applications using the WebView component lose data stored locally.

It’s so bad that Google has halted the rollout of the update (when was the last time something like that happened?), but the update has reportedly already hit 50% of devices. Ker-rrrunch, there goes the user data…

The upgrade to Chrome 79 should migrate this data to the new location, but a Chromium engineer remarked that “unfortunately local storage was missed off the list of files migrated.”

After running out of parking space to store its newly produced but grounded 737 MAX jets, Boeing was now forced to stop production on the plane. I shit you not, that actually happened.

Boeing said on Monday that it plans to temporarily suspend the production of its 737 Max jets next month to focus on clearing out the 400 or so aircraft currently grounded in storage.

Some other bits and bobs you might want to read: