The Griffins I: Humble Beginnings

The beginning of a journal chronicling my first adventures in Crusader Kings III, playing as an insignificant noble house in backwater Pomerania.

This post is part of my Crusader Kings III playthrough journal “The Griffins”. The following instalments of the series have been published so far:

Our journey begins on the 15th of September, 1066 AD in the Duchy of Pomerania.

Pomerania, literally “land by the sea”, is an area on the south coast of the Baltic, split between modern day Poland and Germany1. It includes the islands of Rügen, Usedom and Wolin and the Pomeranian Lake District among its most prominent features. It is bordered to the north by the Bay of Pomerania. On the land sides, it was historically considered to lie within the rivers Recknitz and Trebel in the west, the Vistula in the east and reached as far south as the Noteć at some point. 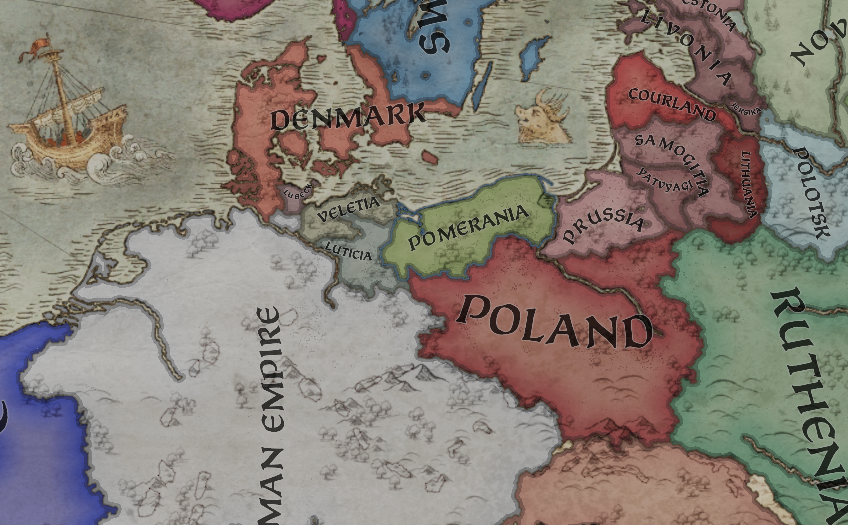 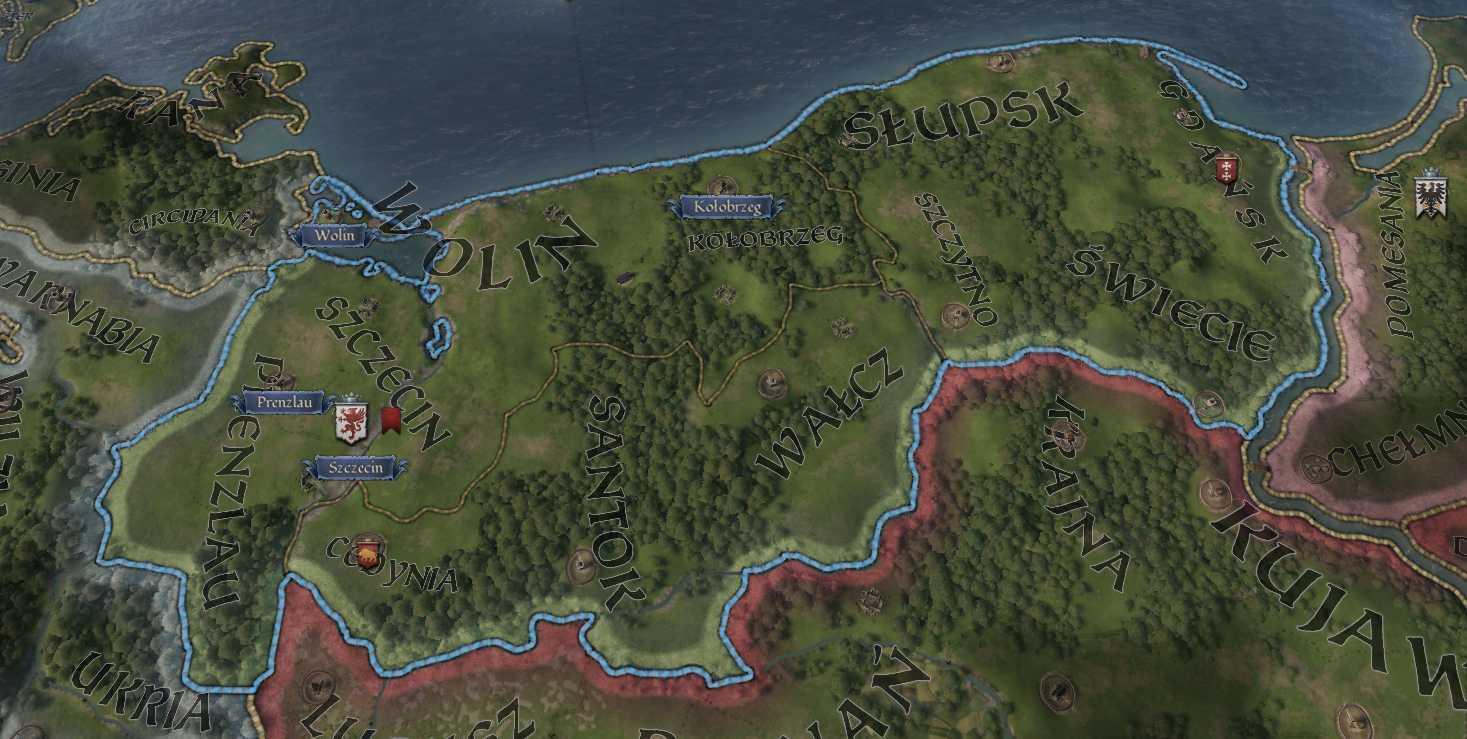 Pomerania is a land of numerous bays, lagoons, peninsulas and small islands, rimmed with rugged beaches. There is also an expansive hinterland with many lakes, endless fields, rolling hills and countless little, fairy-tale forests. The land is fertile and agriculture and a slow peasant lifestyle abounds.

Duke Siemomysl is the first Duke of Pomerania and the leading member of House Pomorza (“Respect, Might and Truth”), the dynasty he founded at his birth in 1010 AD. House Pomorza is also known as “the Griffins”, nicknamed after the mystical animal adorning their coat of arms.

Siemomysl is 56, lustful, cynical and lazy. In neighbouring courts, you often hear him described as an indulgent wastrel. He has devoted himself to a lifestyle of stewardship. His domain and its people are what he cares about most in this world. He thinks of himself as quite the architect and builder. He survives his wife, who died a few years ago and bore him two sons: Swietibor (26), Count of Gdańsk and Marshal of the Realm and Gwienomir (19), Count of Cedynia and Spymaster at his father’s court. 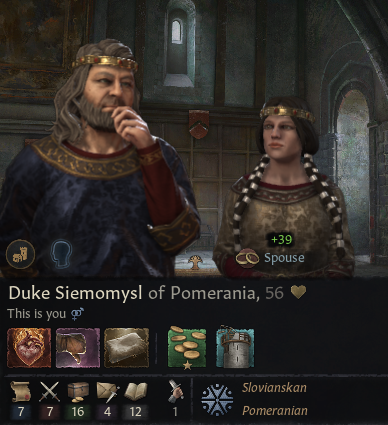 Now, Siemomysl, who fancies himself too young to stop chasing the womenfolk around the bedsheets and would also welcome a few more heirs – just to be safe – has taken himself a second wife. Vladislava, the newly minted Duchess of Pomerania, is 31 and a commoner. On the 15th of September, 1066 AD, the Duchy of Pomerania erupts in several days of celebration of their ruler’s second marriage, all endorsed by the Duke, who generously pays for the festivities out of his own pocket.

Once the raucous celebration has died down and Vladislava has settled in at court, Siemomysl calls his sons into his audience chambers. He explains that his marriage plans are far from complete and that it is now down to the two boys to also get married. He has it all worked out and arranged already… 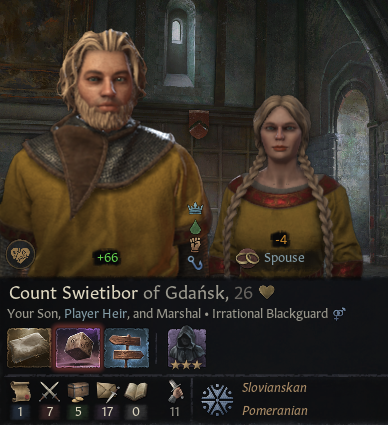 Swietibor is marrying Kornelia Lutici who, at 35, is nine years his senior. But, says Siemomysl, she isn’t bad looking and, more importantly, she’s the daughter of neighbouring Duke Kasper of Luticia. 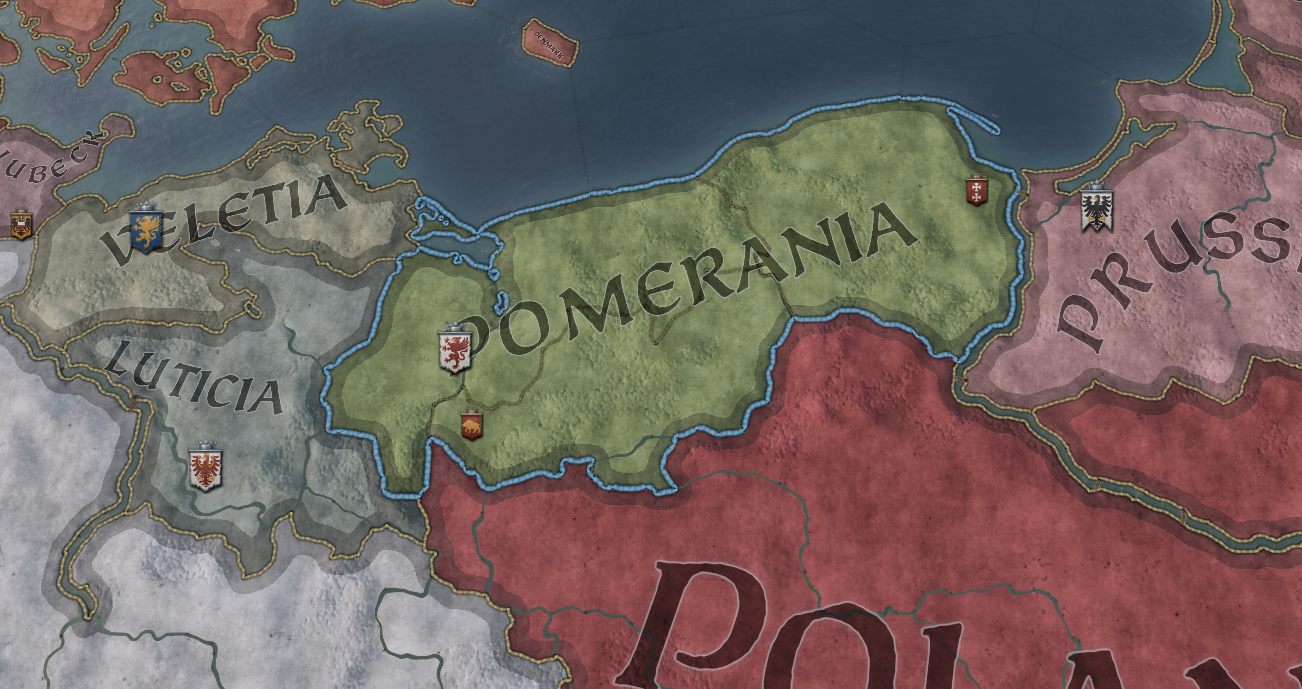 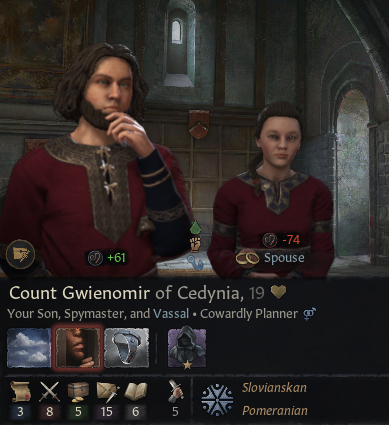 …which is why Gwienomir gets to marry his uncivilised sixteen-year-old lowborn Bjarmian flame Galya. At least she’s rather comely and her family is reported to be quite fecund, which hopefully means many, many grandchildren for old Siemomysl. Being from another culture and religious group, she’s very shy and terrified of the life at court.

Meanwhile, Siemomysl is already dealing with another one of his problems, leaving his sons to discuss their new wives. It looks like the Duchy of Pomerania’s Volkhv (priest), a fellow called Jędrzej, doesn’t like the Duke very much and therefore doesn’t endorse him, withholding taxes and levies from the church’s holdings within the duchy. Siemomysl decides to have his spymaster work the Volkhv over for a bit to subtly convince him that he does, indeed, like his Duke. At least enough to start paying him his dues, at least.

The rest of autumn and winter pass quite uneventful. The snow melts, spring comes to the land and the countryside slowly awakes from its slumber. 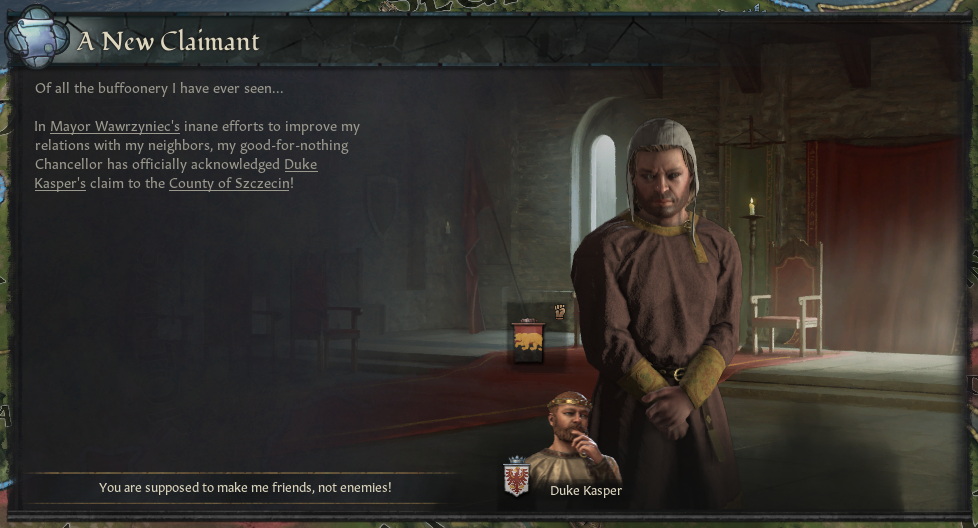 Then, in April of 1067 AD, a minor disaster kicks off quite a fracas at court. Siemomysl’s idiot Chancellor, Mayor Wawrzyniec of Wkra, has officially acknowledged Duke Kasper’s claim to the County of Szczecin. Which means Kornelia’s father, should he ever tire of the new alliance between the two duchies, might try to invade Szczecin to expand the borders of Luticia at the cost of House Pomorza. What a debacle!

Wawrzyniec gets fired immediately to be replaced by Mayor Karel of Czaplinek. Siemomysl also decides to beef up his military with some more men-at-arms units. Even though Duke Kasper is a ally, it can’t hurt to be on the lookout now. Of course, Wawrzyniec is now pissed off and wants his council position back. The ass.

In September, good news spreads among the inhabitants of Pomerania: Duchess Vladislava is pregnant! Siemomysl decides to be proactive and start the search to find a court physician. He hires Jarka (24), a lowborn woman who comes with high recommendations. Some people have characterised her as a fool in the past, but Siemomysl doesn’t care, as long as she’s a good healer.

At the beginning of December, Volkhv Jędrzej starts to endorse his Duke and the money from the church holdings starts flowing again. It looks like he’s finally seen the light. Siemomysl decides it can’t hurt to have his spies keep working on him nonetheless. It always pays to have good relations with the church, after all. 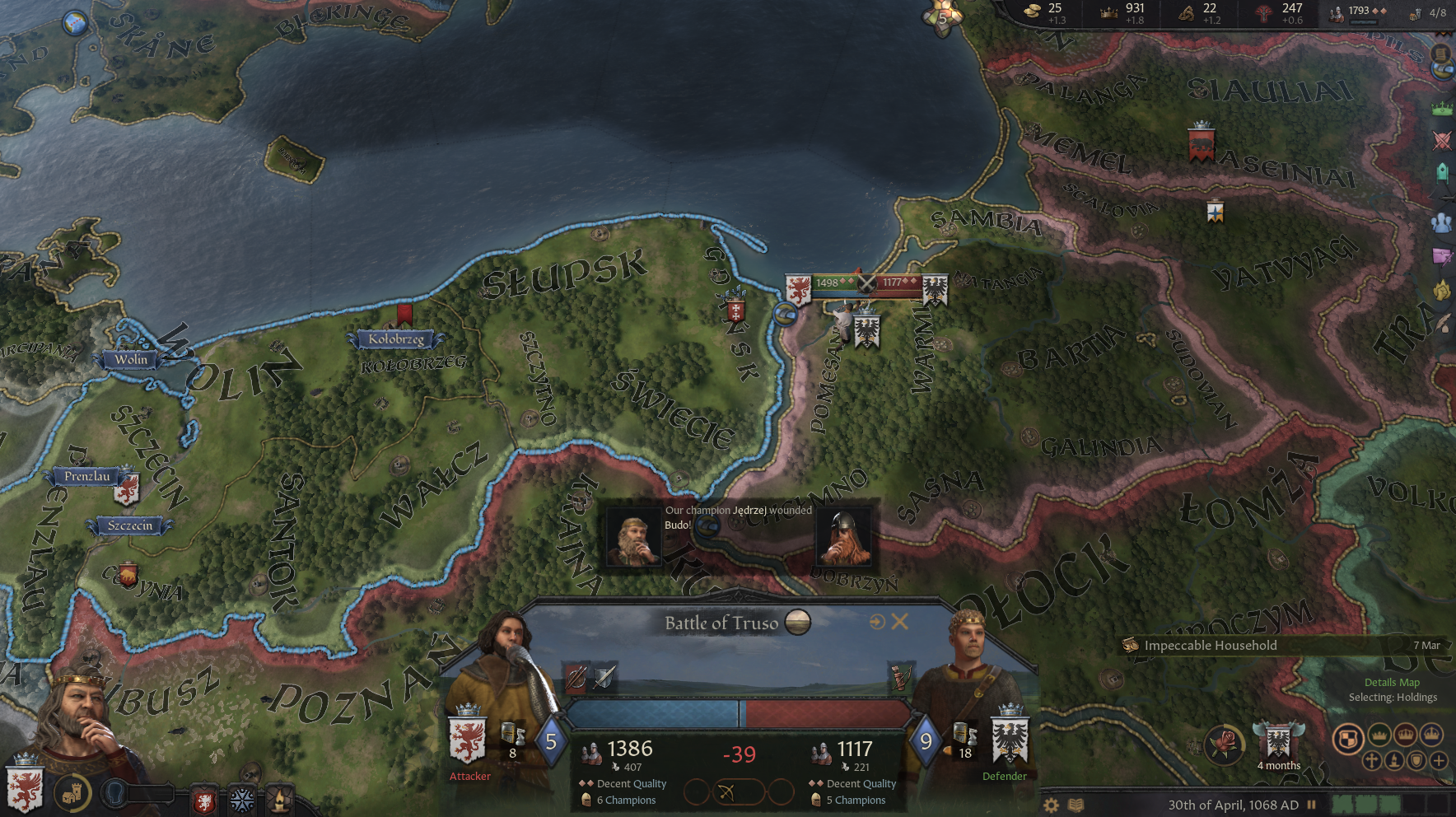 On the 17th of February, 1068 AD, Gdańsk is raided by soldiers from High Chieftain Milzas of Prussia (he is personally in command). Siemomysl raises armies in Kołobrzeg to defend his lands and puts Count Gwienomir in command. At the approach of Pomerania’s superior forces, the raiders are fleeing back to Prussia. Gwienomir pursues them across the border.

On the 22nd of April, 1068 AD, both armies meet at the Battle of Truso to calamitous results. Count Gwienomir is killed on the battlefield! Pomerania loses the battle. Of 1969 soldiers on the field, 628 are dead. The survivors of the army slink back home and the raiders disappear into the Prussian countryside.

Siemomysl, wrecked with grief over the death of his younger son, decides to keep the army around a few more months to stand watch in Gdańsk, lest the treacherous Prussians reappear. They do not.

Gwienomir’s holdings in Cedynia get taken over by his son Count Szczęsny, who isn’t even one year old. Since Gwienomir is dead, the realm’s council needs a new spymaster. Siemomysl assigns Swietibor, his surviving son, to the job. He gets replaced as marshal by Miłosz, a random lowborn soldier Siemomysl found hanging around at his court and who seemed good with a blade. We don’t know his provenance, but it’s very endearing that he looks a lot like Shakespeare’s Fallstaff. 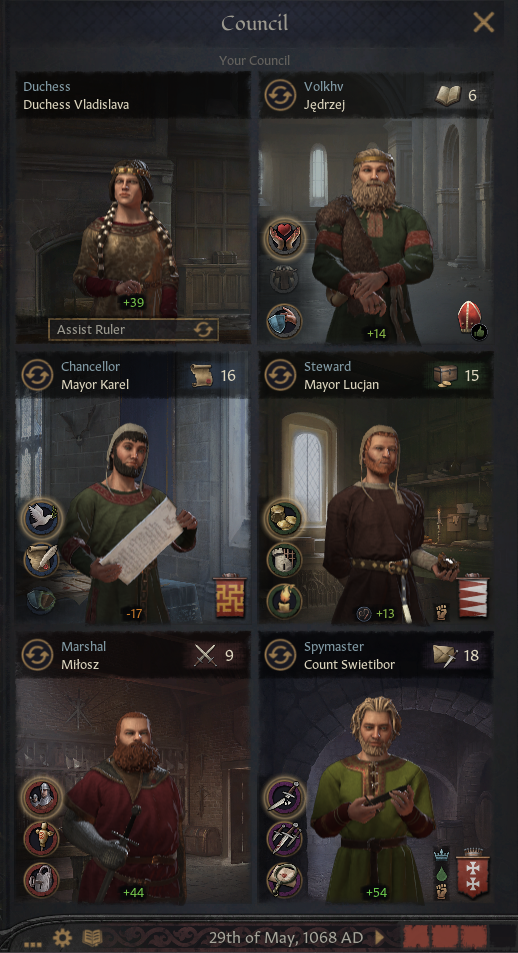 Sadly, he continues his predecessor’s vexing habit of drafting guards as levies, which causes Pomerania to already become notorious as a territory with very unsafe highways, especially in times of war. Somehow neither Gwienomir nor Miłosz ever got the hang of this.

On the 5th of May, 1068 AD finally some good news: Siemomysl’s daughter Ludmila z Pomorza is born. Still, the Duke continues to be plagued by grief and stress over his dead son. In October, Swietibor decides to try to cheer his gloomy father up by inviting him to a feast in Gdańsk. This only succeeds partially though, since he drinks way too much at his own feast and proceeds to vomit on Siemomysl later in the evening. The Duke does have a good few days at his remaining son’s court, though and forms a friendship with Mayor Dobromil of Koszalin over the latter’s retelling of old war stories.

On the 21st of February, 1069 AD, the Battle of Neumünster takes place. In the outcome, the Holy Roman Empire under Kaiser Heinrich IV “the Foolish” annexes parts of Veletia, Pomerania’s north-western neighbours, in a holy war. The war ends on the 11th of March, 1069 AD. Shortly thereafter, the Danes invade the western part of what’s left of Veletia. Pomerania is now suddenly boxed in between two threats: The belligerent chiefdom of the Prussians in the east and the threat of expansion from the Holy Roman Empire in the west. It seems Siemomysl and his vassals have set quite the task for themselves in the times ahead if they want to keep Pomerania safe and in one piece.