The Griffins II: War is Brewing

In the second part of my CK3 journal, things are starting to heat up around Pomerania, but Siemomysl manages to keep his duchy out of the wars. For now…

This post is part of my Crusader Kings III playthrough journal “The Griffins”. The following installments of the series have been published so far:

Parts I, II and III

We re-join the court of Duke Siemomysl of Pomerania on the 29th of September, 1069 AD. Siemomysl has just decided to shift the attention of his spymaster, and son, Swietibor from his Volkhv to disgruntled Mayor Wawrzyniec. The idea is to subtly work on Wawrzyniec and make him a bit more happy, without giving him that seat on the council that he wants so much. He’s simply too incompetent to have him run anything ever again. 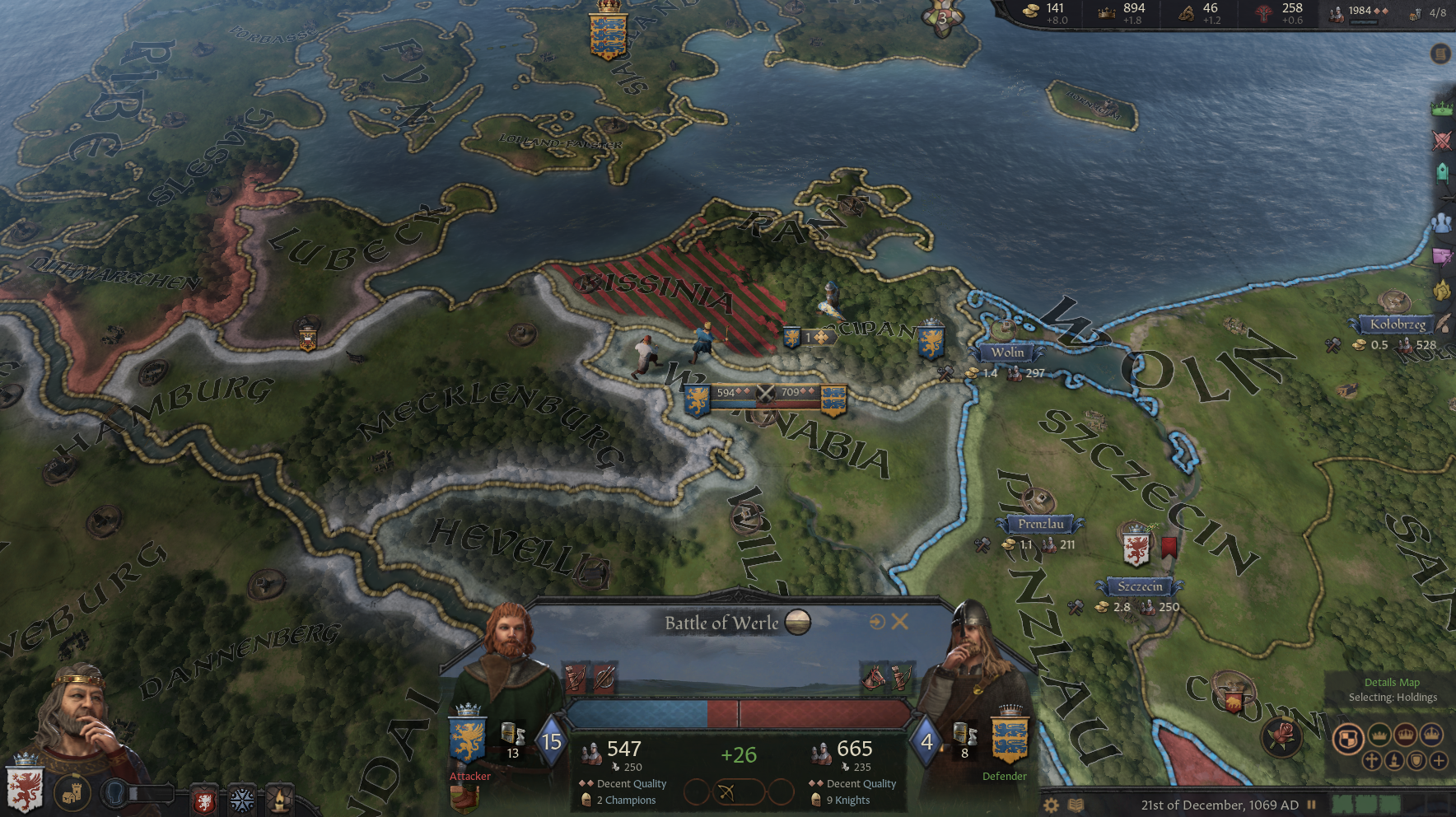 On the 21st of December, the Danish under Prince Harald “the Whetstone” of Denmark defend their invasion of Veletia at the Battle of Werle. But at the Battle of Neubrandenburg on the 29th of May, 1070 AD, Duke Krutoj recaptures the County of Kissinia and beats the Danish back out of Veletia.

On the 14th of June, Siemomysl gets a letter from Duke Kasper of Luticia: His neighbour wants him to join him in his conquest of the County of Kissinia in the Duchy of Veletia. Kasper obviously wants to exploit Duke Krutoj’s weakness after the war with the Danish. In light of Kasper’s recent claims on his lands, Siemomysl decides to decline. He doesn’t want Kasper to get too powerful. Even if his daughter-in-law will probably get very mad about this because he refused to help her father. Swietibor raises an army in Gdańsk and goes to war together with the Luticians. Undoubtedly Kornelia’s doing. 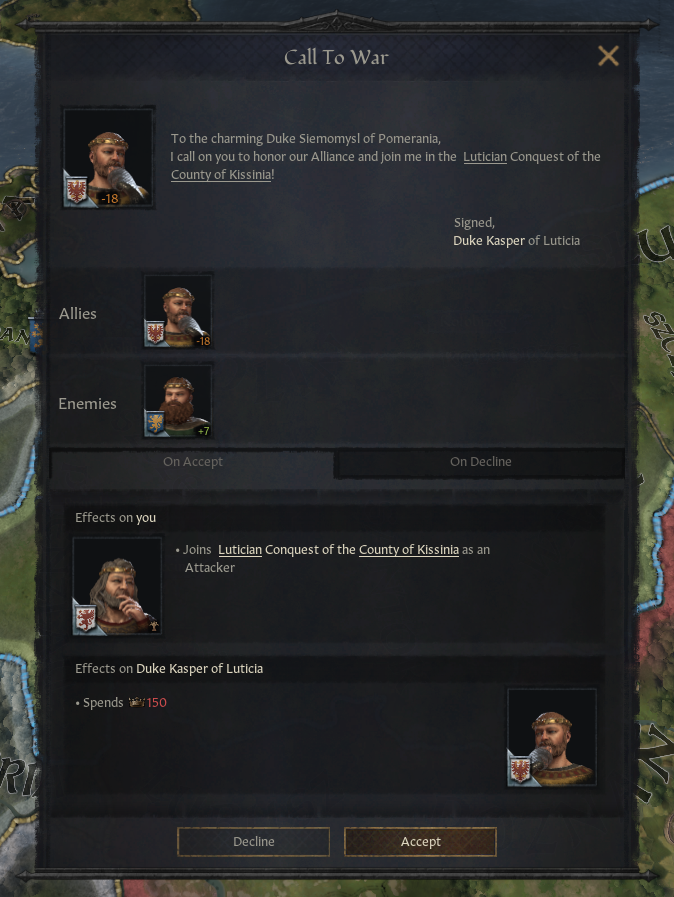 On the 1st of November, Duke Kasper beats Duke Krutoj at the Battle of Voligost, the army from Gdańsk arrives too late to assist. Kasper starts the Siege of Voligost and Swietibor takes his army to the eastern border of Veletia and starts the Siege of Roztoc. On Christmas Day of 1070 AD, Duke Siemomysl starts construction of bastions and curtain walls in the city of Szczecin. War is obviously brewing and it can’t hurt to start fortifying some of the holdings, the Duke of Pomerania thinks.

On the 11th of January, 1071 AD, Luticia and Veletia fight the decisive Battle of Kamień on Pomeranian ground; the Luticians win. In March, news reaches the court of another war brewing in the south-east between Prussia and Poland. Apparently, High Chieftain Milzas of Prussia was taken prisoner by King Bolesław of Poland at the Battle of Luks. Poland takes the County of Sudovian from Prussia.

On the 14th of May, the Siege of Arkona starts. All holdings in Veletia are now under siege, it’s looking very much like Kasper will win his war. And indeed, a few days later, on the 18th of May, the Veletians give up. Duke Kasper wins his war against Duke Krutoj and conquers the County of Kissinia. 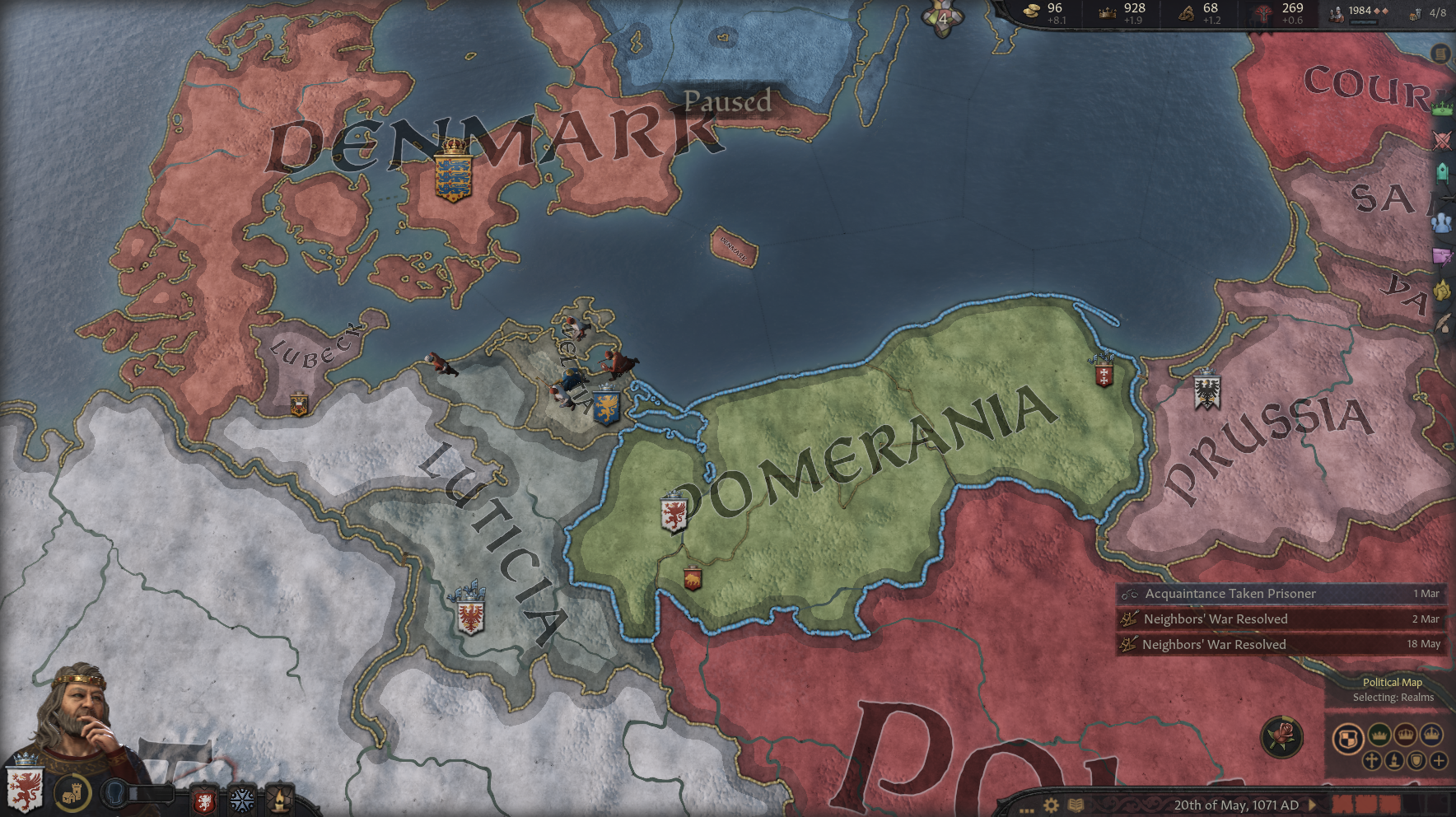 It seems Siemomysl’s vassal, the underage Count Szczęsny, didn’t get the memo, though. He had joined Swietibor as an ally of Kasper and for some reason, his armies continue fighting until the 19th of June, when his marshal Przybzsław is defeated by the Veletian army in the Battle of Voligost. After that little episode is over, there’s finally peace in the land once again.