The Griffins III: The Danes Attack

Pomerania gets drawn into the ongoing wars in the region as a number of Danish dukes open a holy war against its western neighbours.

This post is part of my Crusader Kings III playthrough journal “The Griffins”. The following installments of the series have been published so far:

Parts I, II and III

After Duke Kasper of Luticia has conquered the County of Kissinia from Duke Krutoj of Veletia in May 1071 AD – an offensive war in which our protagonist, Siemomysl of Pomerania, refused to take part – the inhabitants of the region hoped hostilities would abate, at least for a little while.

Those hopes turned out to be in vain, for on the 20th of June, 1071 AD, the Danes attack. Duke Kasper, allied with Siemomysl’s son Swietibor, wants Siemomysl to help defend his recent conquest against the attack by Count Torgils Haraldsen of Skåne and Count Ragnar of Bornholm. Since this is a defensive war, and a holy one at that, Siemomysl can’t really say no this time. So Duke Siemomysl raises all levies and joins the ongoing war for the County of Kissinia. Meanwhile, Swietibor also raises an army in Gdańsk. 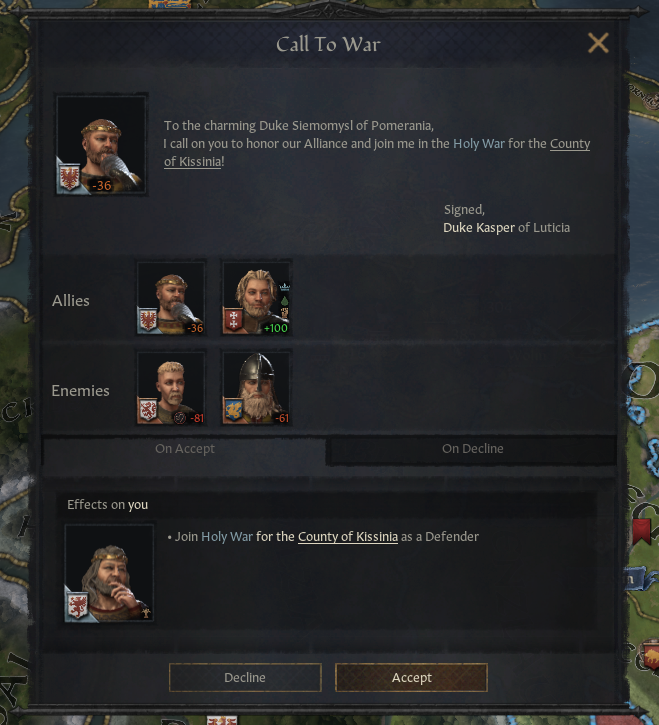 On the 4th of August, at the Battle of Parchim, Duke Kasper manages to win his first battle against the Danes and Count Knud of Halland. On the 28th of September, the Danes travel up the river Elbe by boats to attack Brenna. In October, Count Harald of Slesvig (another Dane) opens a second front on the war and Siemomysl’s army marches to attack the Barony of Hedeby. Shortly thereafter, the Battle of Brenna takes place: Egil Ragnarsen’s army from Bornholm loses against Duke Kasper. 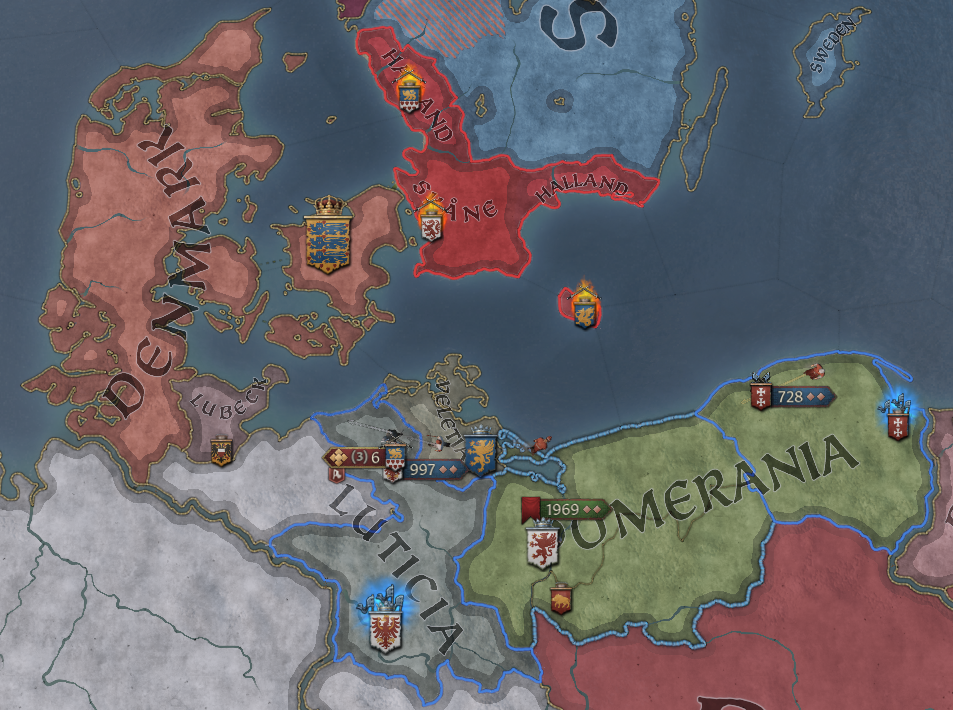 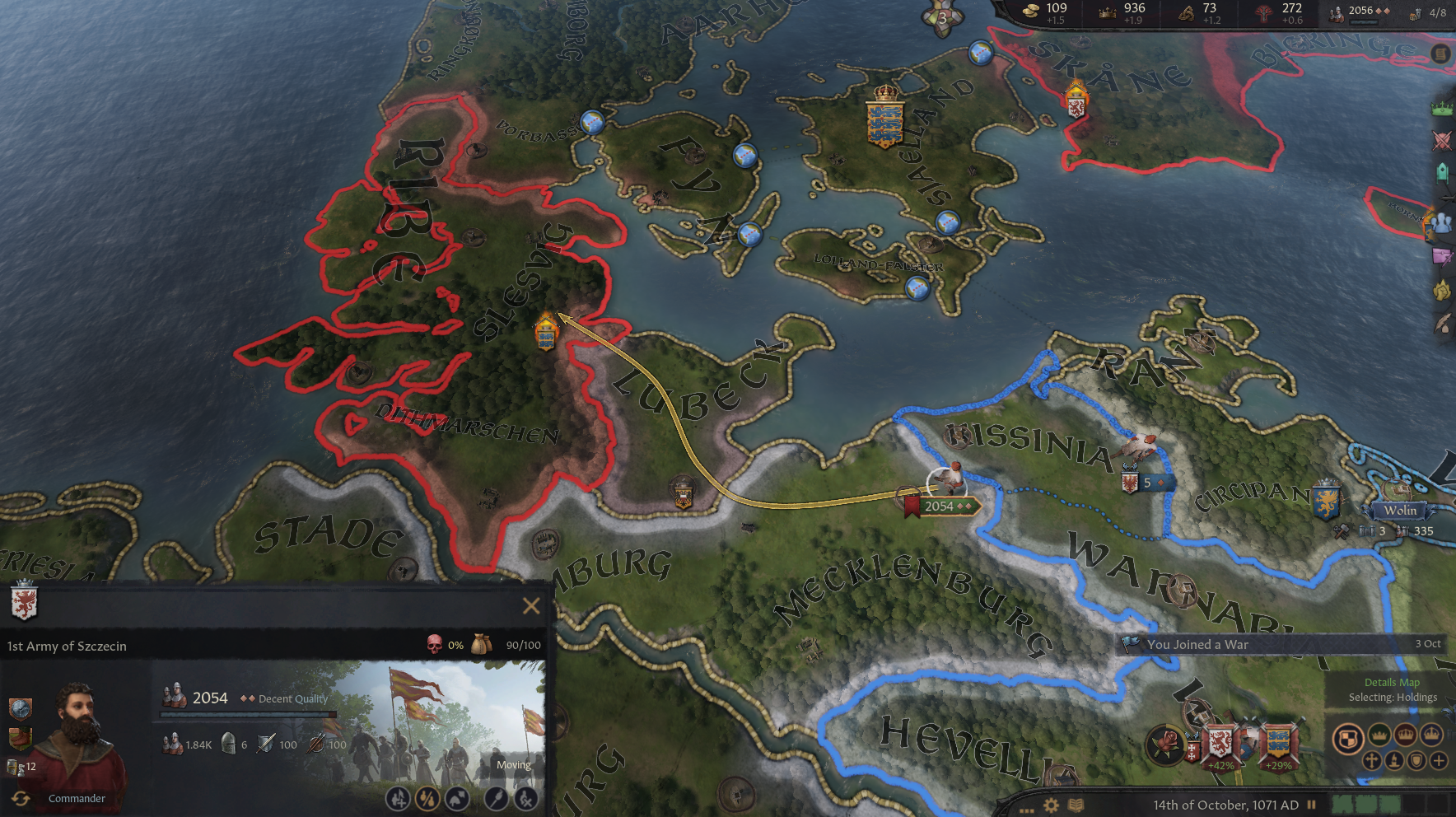 On the 25th of November, Siemomysl’s army begins the Siege of Hedeby. But it barely lasts two months, because on the 19th of January, 1072 AD, King Bolesław II “the Bold” of Poland declares a holy war on Pomerania with the aim of invading Count Szczęsny’s holding of Wałcz. This is a disaster, as Siemomysl’s army is still besieging Hedeby and his holdings back home in Pomerania are undefended! Siemomysl calls on Duke Kasper of Luticia for help on this third front and immediately recalls his army from Denmark 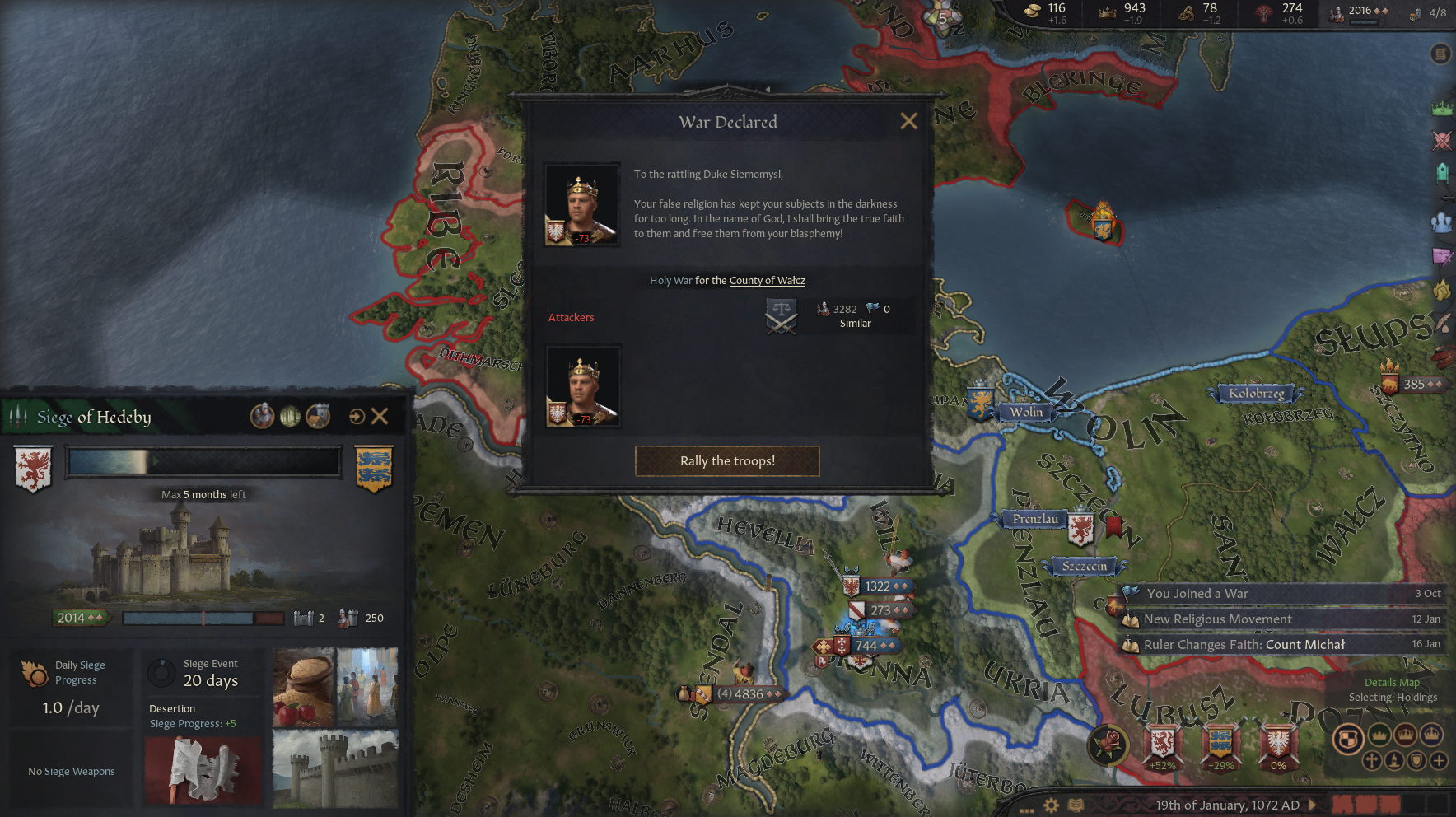 The war for Kissinia ends on the 26th of April as Count Torgils Haraldsen of Skåne has to drop his holy war when Duke Kasper converts to Catholicism, invalidating his casus belli. Two days later, the Polish start the siege of Wałcz. On the 1st of May, 1072 AD, the construction of bastions and curtain walls in Szczecin is finished (which Siemomysl had started on Christmas Day of 1070 AD).

On the 7th of May, 1072 AD, Duke Siemomysl makes a monumental decision which will probably have far-reaching consequences. With the Danes, Polish, Luticians, and of course the Holy Roman Empire, all being Catholic, Siemomysl sees the writing on the wall and decides to convert to Catholicism. This is quite a selfless act in the face of his lustful nature, which will probably irredeemably brand him as a sinner and cause many problems for him personally in the future. But he wisely decides to put the fate of his country and its people over his own personal inclinations.

Thus the war with the Polish ends and all armies are disbanded. Despite his revolutionary decision achieving peace, he nonetheless has to face harsh criticism from his subjects as the majority of them refuses to convert to Christianity and stubbornly sticks to their heathen ways. In spite of Siemomysl’s closest relatives and all of his vassals converting with him. 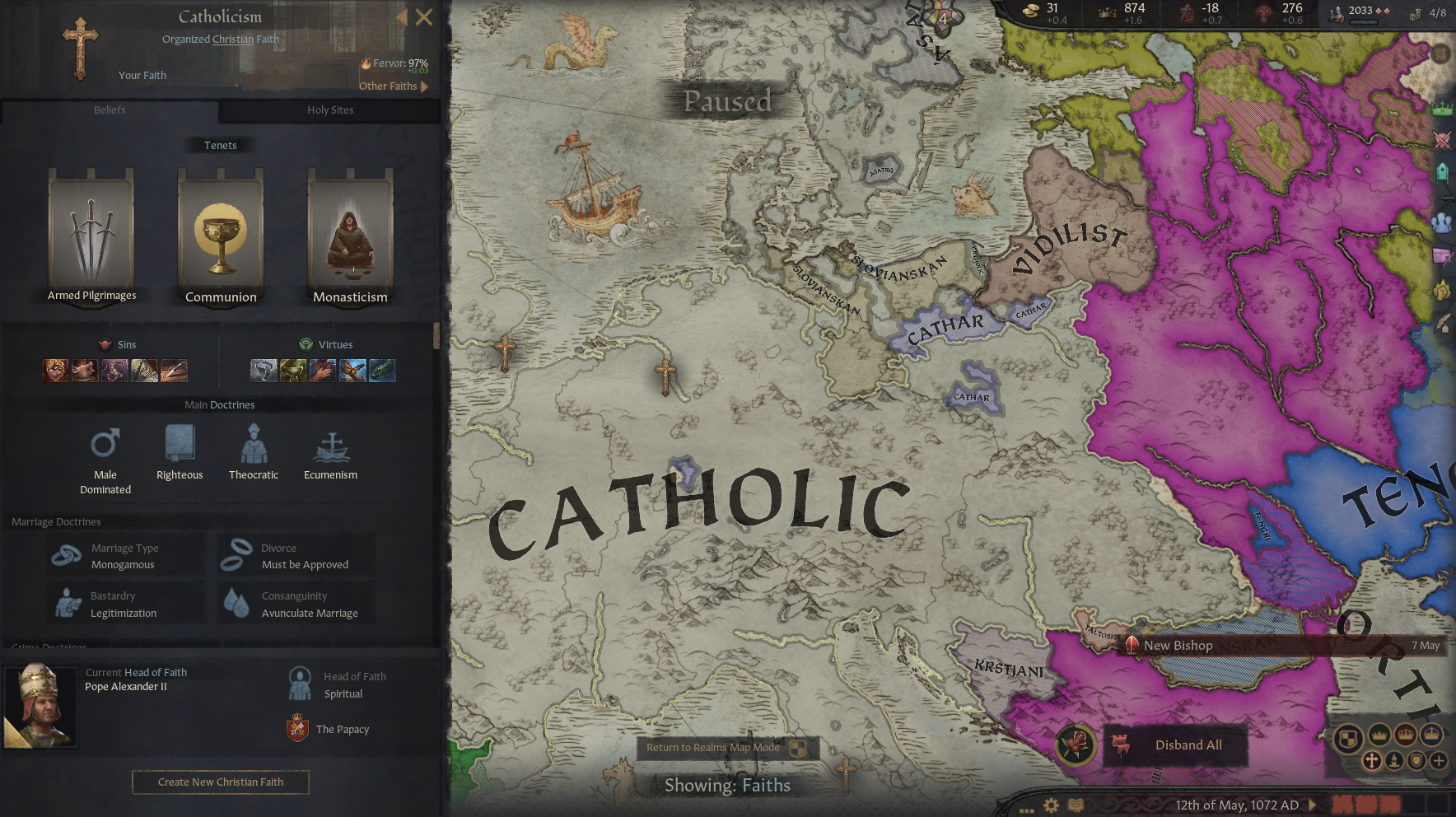 With the new faith comes a new priest at court: Bishop Artucán, who of course doesn’t endorse Siemomysl yet. Therefore, Siemomysl decides to shift the attention of his spymaster Swietibor to the new task of swaying the bishop.

Siemomysl hopes that, in time, his subjects will come to see the wisdom of his decision and that a Christian Pomerania can live in peace amidst neighbours who largely share similar beliefs. Without having to fear constant holy wars from the north, west and south.