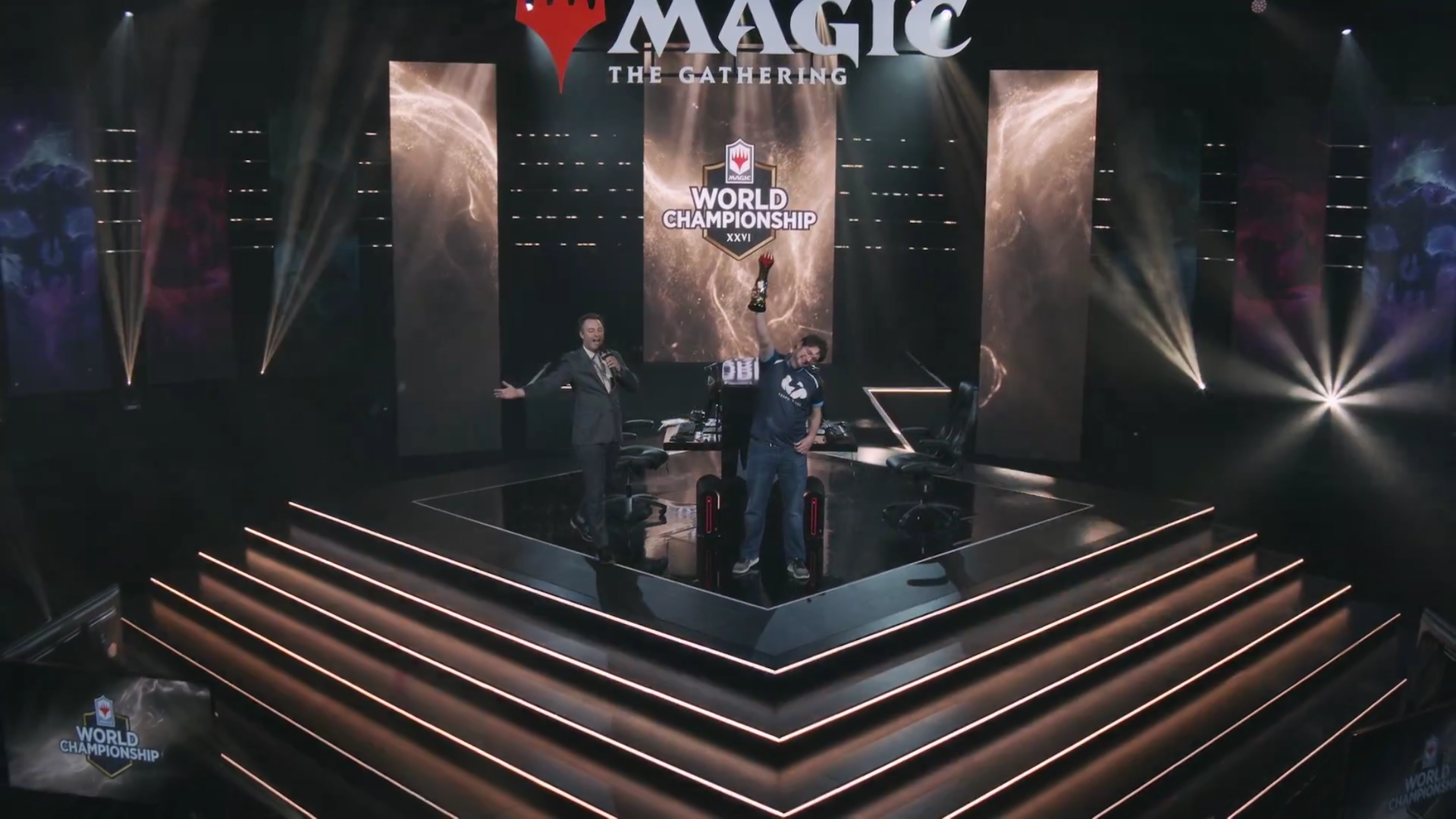 As PVDDR hoisted the ultimate trophy in Magic The Gathering, it became clear that this year’s Arena-centric tournament format didn’t really work.

On Sunday, Magic The Gathering World Championship XXVI came to a close with Paulo Vitor Damo da Rosa (also known as PVDDR, for short) taking home $300,000, the coveted trophy and the title of best Magic player in the world. After getting into esports with PUBG in 2018 and later pivoting completely to Magic The Gathering tournaments, I’ve watched a lot of professional Magic being played on Twitch – both in paper and on Magic The Gathering Arena.

Despite the occasional fuckup here or there (mostly in the audio department), I’ve been constantly amazed at the sheer quality of the official tournament streams from Wizards of the Coast. On one hand, the quality is due to excellent casters and talent like Marshall Sutcliffe, Rich Hagon, Sean Plott and Brian Kibler as well as WOTC employees like Paul Cheon in front of the camera. But it’s also undoubtedly because of the money Wizards have poured into Magic as an esport in the last year. As I’ve been watching Pro Tours – and later Mythic Championships – regularly since mid-2018, it was easy to mark the increase of production that coincided with Wizards’ big push for Arena to become a serious esport.

The streams look great and they are a lot of fun to watch. I follow the action live whenever I can and have caught up – via Twitch recordings – with every single minute of every single WOTC tournament in 2019 that I couldn’t see live. But the increase in slickness and production values has also come with a big cost: a mediocre tournament structures for the Arena competitions that are sucking a lot of the joy right back out of it.

The Trouble Starts with Magic The Gathering Arena

Once you get into it, paper tournaments are pretty easy to understand. A huge field of up to 500 competitors plays Swiss tournament rounds against each other and the good players bubble to the top. In a Swiss system, players with the same win-loss ratio get paired against each other for every round and are thus ranked in a table from best to worst. These Players Tour tournaments (previously known as Mythic Tournaments and before that as Pro Tours) are usually played on three days. After two days of Swiss rounds, the eight best players advance to day three, playing in elimination brackets based on their position in the Swiss table – this last day is commonly called the Top Eight.

After day one it is pretty clear what players have a shot at getting into the Top Eight and the casters will usually concentrate on these players with updates between rounds. A feature match area will show the best-ranked players battling it out in days one and two and selected quarterfinals and semifinals on day three, before switching to showing the finals between the two last remaining contenders. Once you get into it, this is all very intuitive and easy to follow.

The trouble comes in at the point where Wizards decided to play some of the tournaments on Magic The Gathering Arena to promote their new video game. Now, don’t get me wrong: I love Arena. And I think tournament matches are a lot easier to follow on Arena than they are on paper. I also completely understand why Wizards is pushing Arena and why it must be the cornerstone of their esports strategy and thus their whole competitive gaming push.

But you can’t have 500 people duking it out locally on Arena, for obvious reasons. You want them all there in the building for the stream to work, but supporting that many computers is just prohibitive. That’s why the Arena tournaments, from the very beginning, have utilised a stripped down Swiss structure which feeds a different Top Eight and/or Top Four elimination bracket. Throughout the Mythic Championships in 2019, Wizards has continued to tweak these structures and how the elimination brackets work, including on which days these elimination matches start.

This culminated at the World Championship XXVI in the following tournament structure:

Elimination Group plays two rounds, then advance or are eliminated based on record: Two 2-0 players advance to Saturday Play-In. Two 0-2 players are eliminated. Four 1-1 players play a third round of Constructed.

Elimination Group 1-1 players, after completing a third round, advance or are eliminated based on record: Two 2-1 players advance to Saturday Play-In. Two 1-2 players are eliminated.

At the conclusion of Day One, four winning players have advanced to the Top 8 on Day Two while eight more remain in the field to fight for those last four slots in the in Top 8.

Day Two begins in the morning with the eight-player Saturday Play-In of best-of-three Standard Constructed contending for the World Championship Top 8.

The eight remaining players are seeded into a double-elimination Top 8 playoff to determine the four competitors for the Sunday Top 4 playoff. 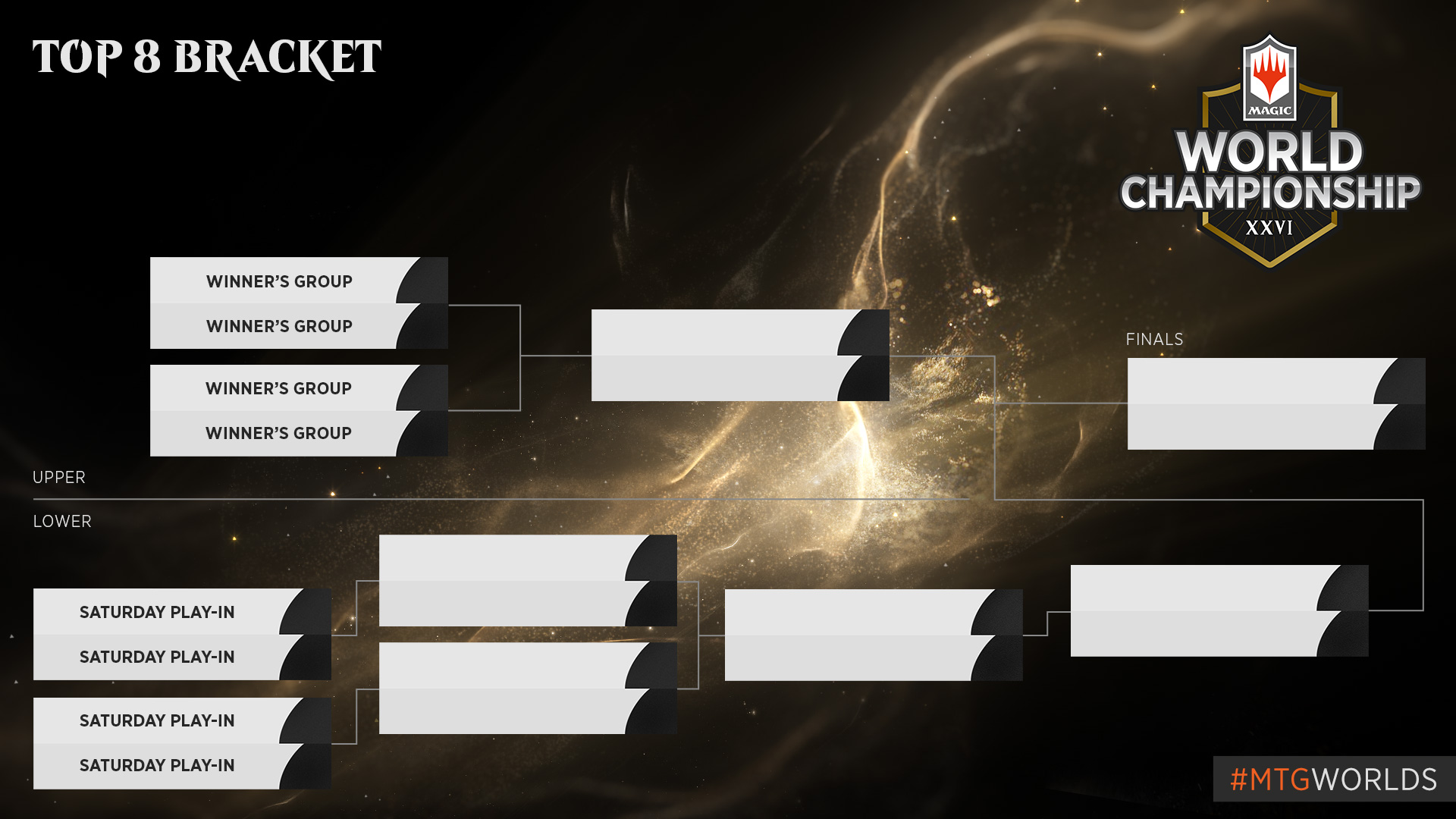 At the conclusion of Day Two, four winning players have advanced to the Sunday Top 4 playoff.

Day Three is the Sunday showdown among the remaining for World Championship competitors.

Lower Bracket Finals continue this playoff structure: The winning player advances to the Grand Finals. The losing player is eliminated.

Sorry …what? Did you get all that? Yeah, me neither. And believe me, it isn’t easier to understand when they try to explain it organically on the live stream.

This tournament structure is a disaster. Ignoring the fact that it’s just plain confusing to the viewer, even the most casual watcher will scratch their head as to why some players (seemingly the good ones) are very rarely on screen, while others (who loose much more often) will be battling it out on camera constantly. Suddenly the good players turn up out of the wings and you can’t really emotionally connect to them because you haven’t seen them all day. This is a similar issue to having good Magic Pro League players skip a whole day of a Mythic Championship – the casual watcher will wonder who these mysterious players are who suddenly turn up and are lauded as the best of the best. For good reason. I mean, you’re tuning into the stream to watch the best players play instead of tuning in to watching them not play, right?

At the World Championship specifically, I had problems rooting for PVDDR because I’d barely seen him play. Him being really good meant he’d just skipped a massive part of the action. And I was actually looking for someone to cheer on after fellow German Thoralf Severin was eliminated. I ended up going with Seth Manfield because he was just on screen more and I kind of bonded with him and his Mono-Red deck over that. Simply because he had more screen time, I think.

The Weirdest Finals Ever (And Not in a Good Way)

But that wasn’t even the worst problem. The worst problem was the Grand Finals. Márcio Carvalho came up through the lower bracket, which meant he had to win best-of-three matches of best-of-three games against PVDDR. With other words, in his best case scenario PVDDR could win the title by winning four straight games. Carvalho would have had to win six games straight – best case scenario – to become World Champion. As you can see, the odds were stacked massively against Carvalho. Perhaps unsurprisingly, he lost.

This creates a very weird dynamic. I don’t know about you, but I like two finalists to have the same odds of winning. It makes for a much more pleasurable viewing experience. Can you think of another major spectator sport where a contestant in a World Championship final starts with a massive handicap? Should the Brazilians always start with two goals against them in the World Cup because they have the most titles? Should Canadian players in the NHL be forced to only use one skate in important games? Should players start with different amounts of chips in the World Series of Poker? Of course not! That would be silly. So why are Magic tournaments using such a weird tournament structure? 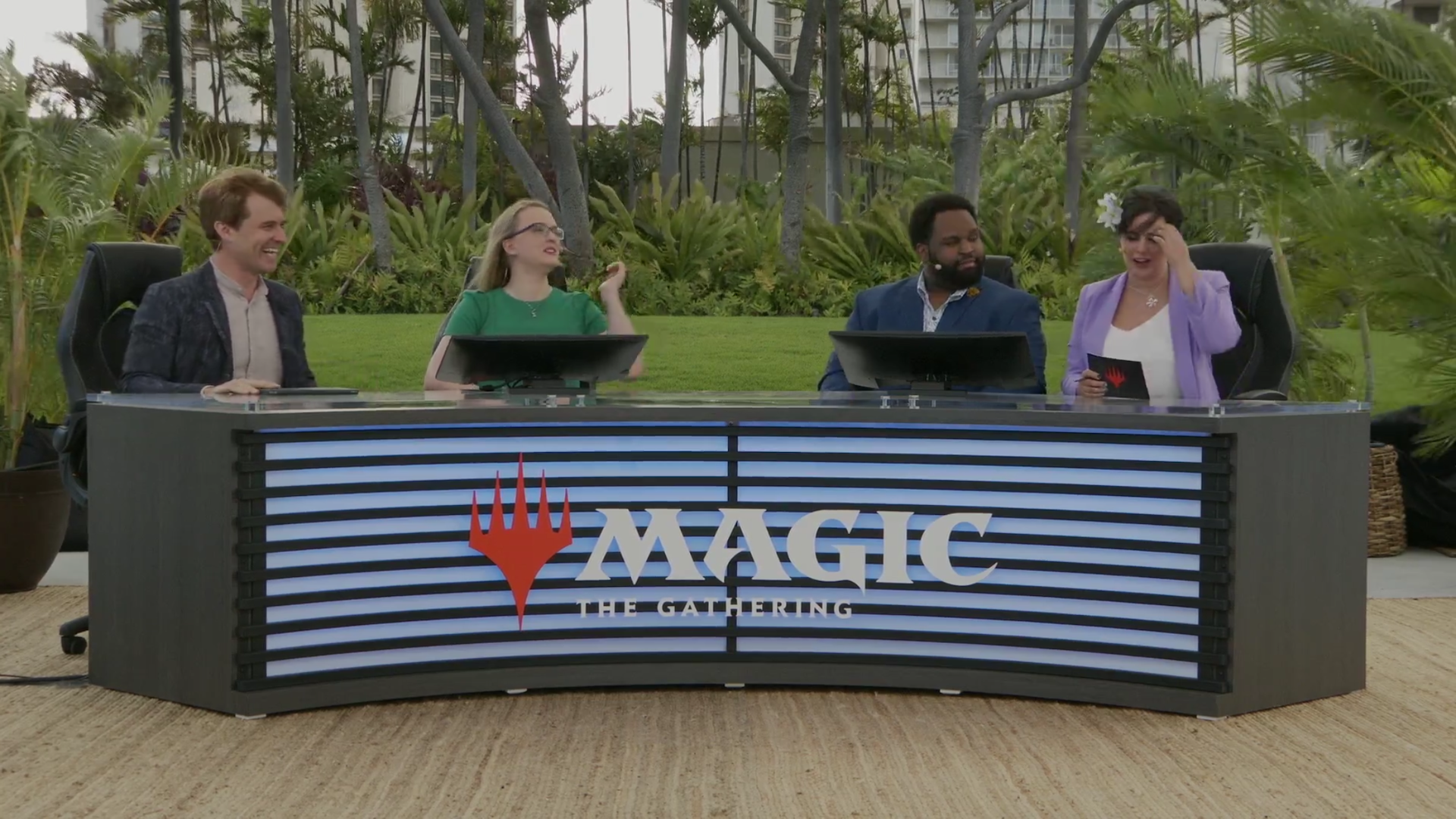 Maybe the wind of change that’s blowing here is a bit too strong? – Image: Wizards of the Coast

Let me be honest here. I have no idea how to fix this. I’m way too new at thinking about this stuff for that. But I feel very strongly that this needs to be fixed somehow. At the very least, we need a straightforward single-elimination bracket for the Top Eight part of the tournament where all players play the same amount of matches and games.

The Magic The Gathering World Championship XXVI was fun too watch despite all of this. But I fear I only had fun because I’m a diehard Magic fanboy. Someone who’s stumbling across this stuff from the Twitch frontpage will, in all likelihood, be left bewildered and confused and will probably give up on watching Magic streams. Which makes me sad, because I believe that Magic is a very enjoyable esport. More people should be watching it, not less.