What the fuck is wrong with Microsoft? They push this shit on my taskbar with a minor update? Not even with one of those twice-a-year feature updates?

Look at that shit! Pixelated weather icon looks like it was copied off 1998-era ICQ assets. The fucking font isn’t the same as anything else on the taskbar (or the Start menu for that matter). It’s blurry as fuck as well. And the whole thing doesn’t even adhere to the operating system’s language settings? What the hell, Redmond?

I legit thought someone had installed malware on my computer. This whole thing looks like baitware for a trojan straight from a Russian hacker forum that you get served as a “Free Weather App for Windows” via some scammy banner ad. Only remembering that I shut down my PC for a Windows update before booting into Linux last night saved me from total panic here. And a search on the web.

Apparently, Microsoft has tested this absolute shitshow since January. How the fuck did nobody notice that this piece of shit looks like Russian malware and not like a part of the operating system made by the fucking maker of the operating system? Jesus Christ. People are really going soft in the brain working from home. 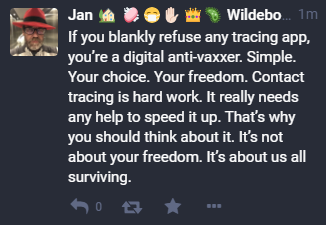 So here it is… The latest narrative from the obedient and the scared: If you’re actually even thinking about exercising your freedoms, you’re an anti-vaxxer. You’re anti-science. You’re killing us all!

Well, I have news for you: While vaccines work, contact tracing apps don’t. They don’t work. Oh, and don’t take my word for it.

The idea that contact tracing can be done with an app, and not human health professionals, is just plain dumb.