Why I Worry about the Best Sci-Fi on Television 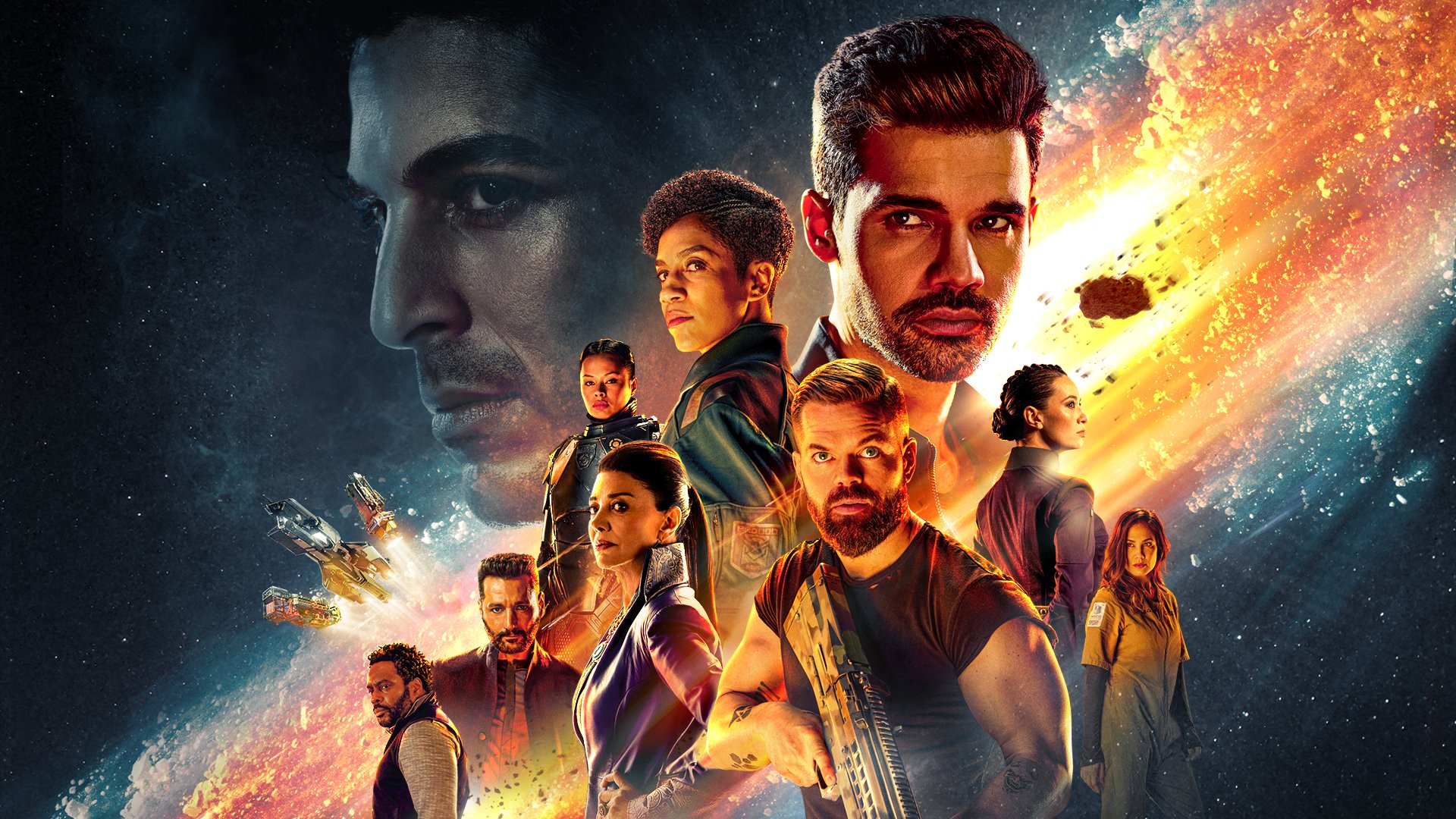 Why is The Expanse being prematurely axed? And what will happen to the character of Alex in the final season?

In my opinion, The Expanse on Amazon Prime Video is the best sci-fi currently on television. Probably the second best TV series currently being produced, after Netflix’ The Witcher. Yesterday, news broke that it will get its sixth season, but that the show will end after that. Having thought about this for hours last night, and now having slept on it, this worries me. A lot.

Note: Please be aware that this piece includes a number of spoilers for both the Expanse books and TV show.

Why am I worried? Because I love this show. I’ve been an Expanse fan ever since I first saw a picture of Thomas Jane on board a space station in a fedora. This was about a week ahead of the launch of the pilot episode in the US. I fired up a VPN to watch the pilot, because at the time, there was no other way for me to access the SyFy stream here in Germany. Between watching the first and the second episode, I figured out that the TV series was based on a series of novels. I had read the first book, which I absolutely adore, before the second episode streamed. I have religiously followed everything Expanse-related ever since. Which includes ordering a $260 replica of the Rocinante from Kickstarter.

To understand what is so anxiety-inducing when you read that your favourite show has just been renewed for a final, sixth season, you need to understand the book series it is based on. This series is based on nine 500-plus-page-books (six of which have been released, the final one coming in 2021) and has established an absolutely huge world. The first season of the TV show covered the first half of book one. The second season covered the rest of that book and the first half of book two. The third season covered the second half of book two and book three. The fourth season, the last one I’ve seen as season five isn’t released yet, covered book four and a bit if book five. This leaves four and a half books to be crammed into two remaining seasons of the show.

This is disappointing to me because I think I see a trend here. While being perfectly fine television, season four already left a bit of a bitter taste in my mouth. The season, taken by itself, is good. But when you’ve read the book it is largely based on, Cibola Burn, you realise it dropped far behind what could have been accomplished by bringing that epic story to TV. Cibola Burn is by far my favourite Expanse book and the TV adaptation does not really do it justice. The setting is too cheap and, with a possible exception of Murtry, I don’t see the character development being well portraited either. This is a sharp downward trend from how well the first three seasons transformed the book material into action on the screen. Season one especially did an absolutely incredible job on this. Especially considering its budget constraints and the scope of the story.

Before yesterday’s announcement, I was already worried about the show’s ability to capture what happens in Nemesis Games, the next book of the series. Spoiler: Earth is almost completely destroyed by a Belter faction in a mass driver attack. Showing this attack on TV on a show with The Expanse’s budget, which has been estimated at around $4 million per episode, will be extremely challenging. Even if, as has been rumoured, Amazon gave them some extra money to play with when they bought the show.

I guess we will know more about that soon, as season five is going to premier on 16 December with three initial episodes. With the rest being spaced out one a week until 3 February. This is another thing that worries me. The best thing about season four moving from SyFy to Amazon was that you were able to binge watch it. Why is Amazon moving away from that model? Do they make more money like this? Is their service haemorrhaging users and they want them to remain subscribed to watch the show? Do they want to prevent users from watching all of The Expanse within a 30 day trial period? Or does season five simply not hold up if you binge watch it? I have no idea.

But even if the next season turns out to be incredible again, season six, which hasn’t even started production, is already giving me sleepless nights. How can they possibly cram all those other books into one season? Will it have more than the 10 to 13 episodes of the first five seasons? Another question that we have to consider is if they actually plan to end the story after book seven, Persepolis Rising. This would make sense, since the story jumps forward a number of years at the start of Tiamat’s Wrath (book eight), with some supporting characters having died and everyone else aged significantly. Maybe they are planning to end the show now and have tentative plans to bring it back for a second run or a miniseries-type deal in a few years to cover the final two books? While that makes sense from a producer’s point of view, it would be extremely painful for fans like me.

I do have to say that I think the book material, while stellar (pun intended) throughout, has been dipping in quality somewhat with the most recent two books – seven and eight. My favourite books being Cibola Burn (book four) and Leviathan Wakes (book one). I hope James S. A. Corey can recover their initial verve for the final book, Leviathan Falls next year. But are the show’s producers (which include Daniel Abraham and Ty Franck, the two halves of James S. A. Corey) maybe aware of some of the length in the latter material and are planning to cut out significant parts of the story and compress it all into ten plus episodes? Hard to imagine. Well, hard to imagine that this will yield something that doesn’t make me very angry. Or very sad.

My final worry about the last season of the show concerns the character of Alex Kamal. It has already been announced that Cas Anvar won’t be returning to the role. He has been under investigation since the summer because of a large number of #MeToo-type allegations that have largely surfaced on Twitter and accuse him of things ranging from having being very disrespectful to women who he tried to get to sleep with him to possibly having sexually assaulted a number of women. Some of the women alleging these things say they were minors at the time and that Anvar knew this. This is connected both to his work on The Expanse as well as his previous work as a voice actor on the Assassin’s Creed series of video games.

I’m usually extremely sceptical of these kinds of cancel culture lynch mobs. I am a fan of due process and I believe in the rule of law. As such, I think behaviour like this should be investigated by the authorities and we should tailor our laws in such a way that the state – and the state alone – can punish people for behaviour that the public deems damaging to other citizens and the legislature has therefore made illegal (within established constitutional boundaries). That being said, I try to avoid thinking like a fundamentalist and there are some cases where I can understand when action is taken based on allegations like this.

Having read the massive collection of material concerning Anvar’s behaviour presented on the show’s subreddit I find it hard not to come to the conclusion that it is real. As always, I think it would have been better for everyone if these people had gone to the authorities or immediately made this information public – instead of years after the fact – but I also understand, and sympathise with, all the reasons an individual might have not to do so. And then to come forward when they realise they are not alone. Having read through every single of those examples, and especially considering Anvar has not defended himself beyond his immediate statement saying he would cooperate fully with the investigation into his behaviour, I understand why the producers decided to not bring Anvar back for season six.

What this leaves us with is a final season with very questionable narrative content, the possibility of a conclusion that won’t satisfy fans of the book series at all and the loss or recast of a character who is absolutely integral to the story. I know that these kinds of recast situations happen, but let’s face it, they always inflict an enduring and absolutely shit feeling on the viewer – unless you’re a television writing genius like J. Michael Straczynski. That’s a shame. Because one of the most important reasons that The Expanse is so good, is the way in which it transformed a series of novels into television. This is usually something Hollywood sucks at doing – just take Game of Thrones, probably the most recent example. The Expanse was an exception. And I fear that exception is coming to an end now.