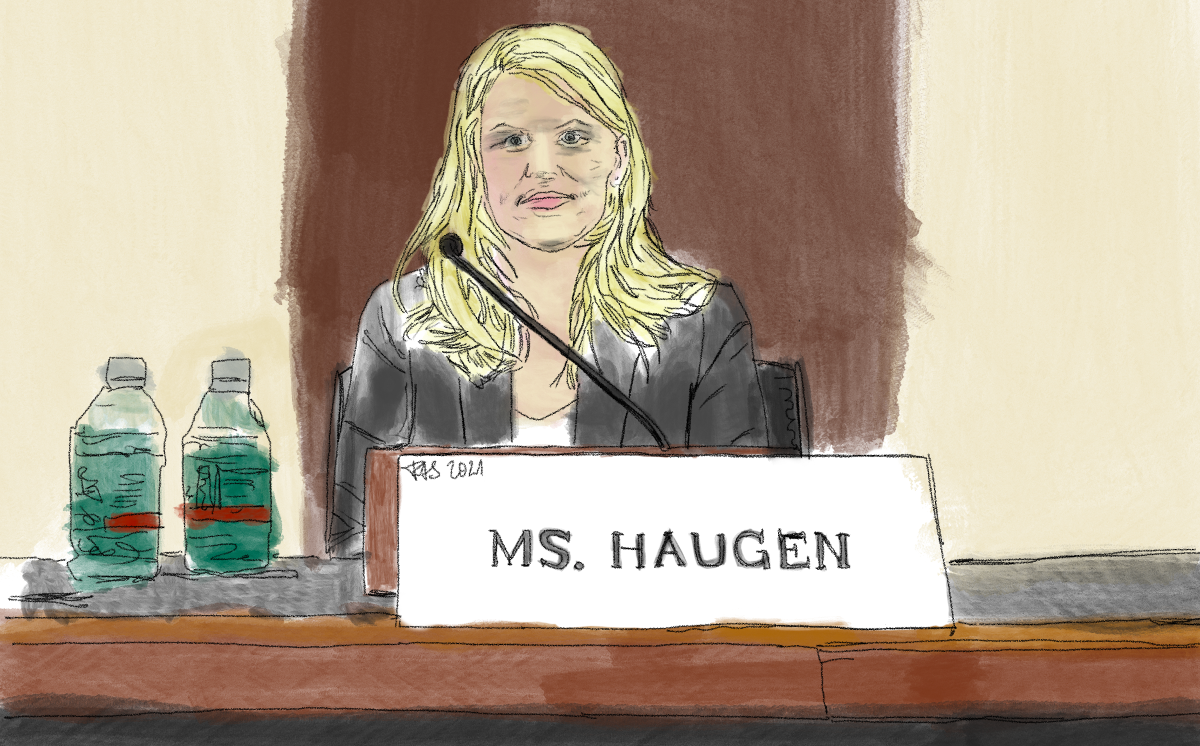 Facebook Whistleblower Frances Haugen is being used by politicians and the media to further their agenda instead of our interests. Don’t be fooled.

Yesterday, while doing research for a podcast, I came across a story on the news website of German public broadcaster ARD proudly espousing the first German language interview with Facebook whistleblower Frances Haugen. Up until that point, I had no idea who she was. But as the ARD was telling me, she was going to testify in Congress about how Facebook was evil because it internally tried to comply with orders to censor its own users as little as possible. Not traditionally a fan of Facebook, Mark Zuckerberg or – least of all – Sheryl Sandberg, I thought to myself:

Well, if it’s Congress and this whistleblower fighting for more censorship against Facebook fighting for less of it, well fuck me, I guess I am on the side of Facebook on this.

I know. I was as surprised of this turn of events as anyone.

Something that can only be described as an unholy alliance between progressive politicians, journalists and their handlers in the so-called “intelligence community” has formed in recent times. This alliance has kicked off the year by championing censorship and deplatforming across a wide variety internet platforms. This went so far, that I – and believe me this hasn’t happened often in the 16 years of her reign – had to reluctantly agree with Angela Merkel on the misguidedness of this action.

Progressive politicians, by which I largely mean Democrats in the US and anything left of the CDU and FDP parties in Germany, have the urge to censor internet platforms because they feel the truth is always on their side and they don’t trust ordinary citizens to decide for themselves. In their view, people are too dumb to filter stories and decide what is reasonably argued and what is bullshit. Their side is science-based truth, everyone else is spouting propaganda and thus those words must be deleted for the betterment of society. The huge irony here is that the left was traditionally the side of liberal politicians. And being liberal in the classical sense means fighting for the state to be as hands-off with its citizens as possible and to, you know, maximise the liberties citizens enjoy in private and in public life.

That is not to say that conservatives don’t also relish a chance at censoring their opposition. I’m pretty sure they do. But historically, another irony of the times, they haven’t fought for it as much as the progressive side. Probably because they also see their words as the absolute truth – the god-given truth in fact, in may cases – but they’ve traditionally had the approach that they themselves are so obviously in the right, and the other side is so obviously wrong, that it is plain for everyone to see (“just look at those idiot liberals…”). For some reason, conservatives seem more inclined to see citizens as adult members of society who can actually decide for themselves what’s good and proper. Maybe this is a Christian thing, I don’t know. I never caught any kind of religion myself.

Journalists, in many cases, are very progressive people and tend to vote Democrat in the US and left of the CDU and FDP here in Germany. So it is not all too surprising that they are on board with this ad-hoc alliance. But they also have an ulterior motive: They see their whole raison d’être being threatened by the internet and especially its social media platforms. Back in the 20th century, journalists had very much a monopoly when it came to telling the public what valid opinions it could chose from when it came to a particular issue. The journalists and publishers owned the printing presses and the antennas and airwaves. Some random Joe Shmoe off the street couldn’t just go and also add his opinion to the mix. The only thing you could do back then is write a letter to the editor or call in to a radio show, which meant your take on the issue was pre-screened and subject to approval by the gatekeepers of public opinion.

The internet changed all that. Suddenly anyone – some random blogger in his mother’s basement, a podcaster broadcasting without pants on or that outcast writer on Substack – potentially had as big an audience as the guys who went through J-school and sucked up to the boss to get on the air. In many cases, the new guys had (and have) a bigger audience. This terrifies professional journalists. And that’s why they are part of this unholy alliance. The same alliance that includes intelligence services, which should be a journalist’s sworn enemy, and which are on board because publishing propaganda and censoring enemy propaganda is what they have done since the earliest times at the court of Louis XIV.

But back to Frances Haugen. She’s blowing the wrong whistle. At least if you’re a plain old citizen without any of the vested interests described above.

Let me ask you this: Would you rather have your constitutional rights and civil liberties curtailed or would you prefer the government doing something about Facebook’s clear monopoly position and the abuses perpetrated against all of us as a result?

I can tell you my answer. I want a free and independent internet with open platforms that aren’t beholden to the interests of particular governments. I don’t want governments to censor people’s opinions in any way. I don’t care if these opinions are wrong and I don’t care if there’s Russian propaganda out there. Because there is also British propaganda, US propaganda and German propaganda. The way to fight this is to fix our education systems and train teachers (and later children) how to spot any kind of PR bullshit and propaganda. We need citizens capable of critical thought, not a government who thinks it knows better and can decide who is allowed to say what. Democracy cannot function that way. AT least not for long.

How about instead of a hearing that bemoans how Facebook is fighting for our right to speak our mind – how dare they! – Congress has a hearing about why the US government has been negligent for decades now in enforcing its own antitrust laws on the big technology companies of Silicon Valley. It started with Microsoft’s criminal takeover of the PC operating system market under those assholes Gates and Ballmer in the ‘90s and it’s continued with Google and Apple having a stranglehold on how we access information and communicate on the internet today. The government taking action here would actually be something that would benefit ordinary citizens.

But no, of course that isn’t happening. What we get instead is the US government, once again, using private companies to do its dirty work. Glenn Greenwald is right when he points to the political establishment and the press being largely in cahoots to make this happen.

And its not like this is only happening in the US. Here in Germany, the situation is very much mirrored as is evident by that original ARD story that started me off down this rant in the first place. This is, is suspect, mostly due to our politicians being driven by the same forces that drive the politicians over the pond. Same for journalists and, most of all, intelligence services, of course. But with the journalists I also suspect that a big factor is that the German media largely doesn’t have its own opinion on things when it comes to matters outside of Germany these days. You will be hard pressed on any given day to find stories with an overseas bend that aren’t clearly copying the outrage and indignant proselytising published in New York Times and Washington Post articles while the German journos where still in bed. God knows they have too much too do and are getting paid to little to think much for themselves. It’s just easier this way.

So don’t be fooled. Listen to Glenn Greenwald, who worked with one of the most important whistleblowers in the last century, when he tells you that not all whistleblowers are, by definition, a force for good. Sometimes they blow the wrong whistle, like Frances Haugen.