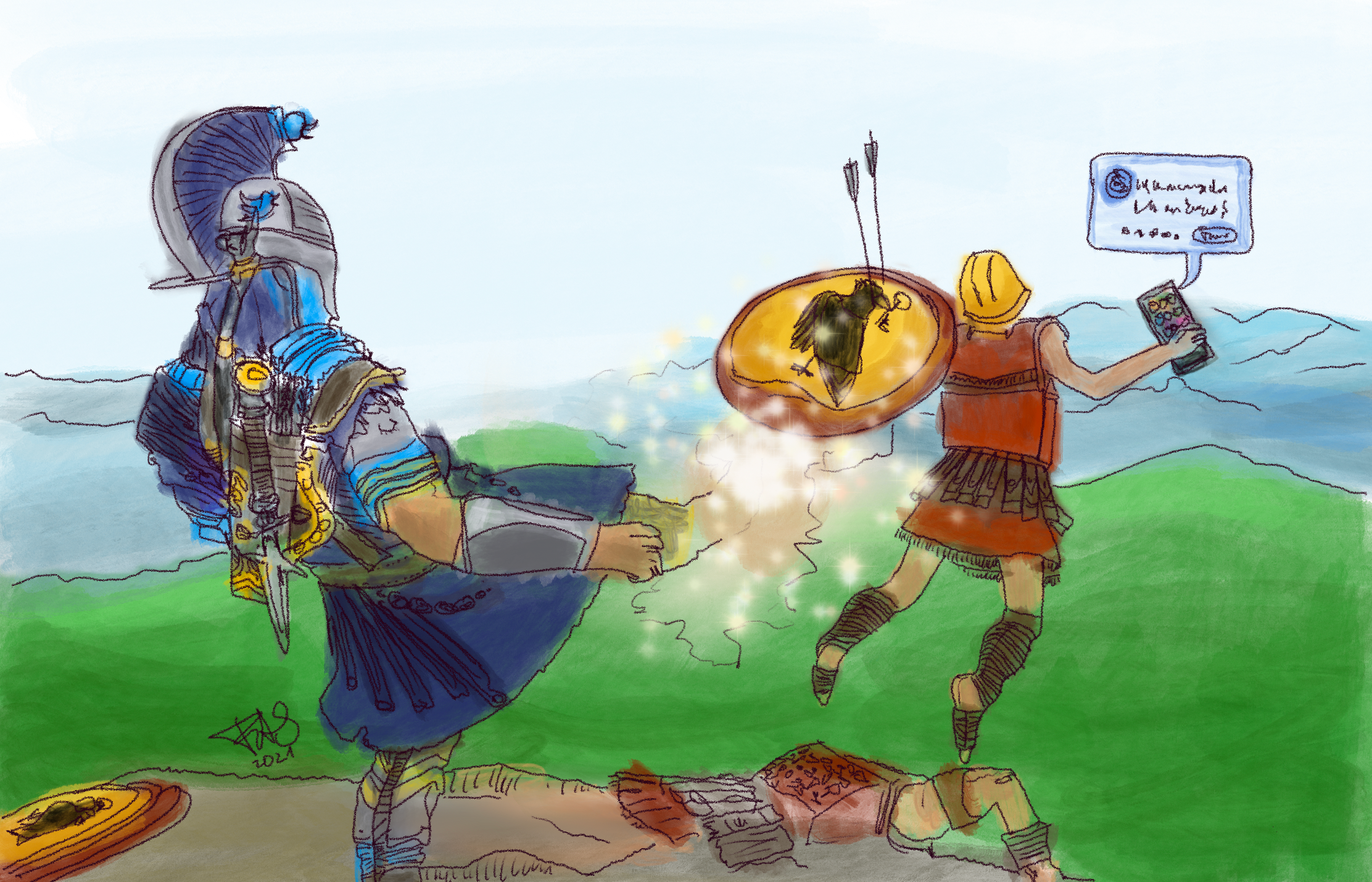 It did not take long until Twitter turned the banhammer against those who actually do good. From Trump to Sci-Hub in just two days.

When Julius Caesar crossed the river Rubicon at the head of his army in 49 BC, he irrevocably set events in motion that would change the cause of history forever. As he crossed, he is reported to have said “the die has been cast” (alea iacta est). This action led to the Roman Civil War, which ultimately led to the Fall of the Republic. When he crossed that river, Caesar showed that the unthinkable could in fact be thought. And done. And once the seeds of change take root, change is unstoppable.

This is why I called Twitter’s actions in suspending the account of the President of the United States “crossing the Rubicon”. Because once you start censoring, it gets easier and easier and pretty soon, it comes naturally. It did not take long for things to get ugly over on Twitter. The company, revelling in its newfound power after first suspending Trump and later banning him permanently, has now started banning all kinds of other people and organisations. One of the latest, and, unlike Trump, tragic victims is Sci-Hub, which also had its account removed.

Sci-Hub is of course highly polarising by its very nature. But it is also a massive force of good for the scientific community. It is a rogue repository of scientific papers, created by Kazakhstani infosec researcher Alexandra Elbakyan – who I consider a hero of my generation. Elbakyan, fed up with a handful of wealthy publishers throttling scientific discourse to further their own gains, created a website that publishes all kinds of scientific papers it can get its hands on – accessible to everyone. This has enabled hundreds of thousands, probably millions, of scientist worldwide to further scientific knowledge by accessing papers they would otherwise have no way to read.

You see, scientists usually pay journals to have their research published there. And the journals then make money from other researchers (and universities) paying very high subscription fees to have access to that research. This is a spectacular act of double dipping that I always – even as a writer who makes money from selling articles to magazines who sell them to readers – found highly immoral. Not only is it wrong to make a profit off scientists trying to improve the knowledge of the human race and try to explain the human condition, these publishers are so brazen as to do it not once, but twice. It’s immorality squared.

What’s even more annoying is that in some countries, for example in Germany, where I live and pay taxes, this is directly financed by the public. The German education system (including the majority of its universities) is publicly funded. Which means I, as a tax payer, pay for the science that is being done there. Which means I also pay to have that science published in one of these journals. But then I, as the tax payer who paid for this, can’t even read the results! And it gets better: Because the universities also need to know what the other universities in the country are publishing, everyone is paying for these subscriptions. Over and over again. With my tax money! I pay for this fucking research and they aren’t even allowed to share it among all the public universities because there’s some fat-ass publisher sitting in the middle getting rich off everyone else’s work.

And it’s not like these journals are simply providing a public service and barely scraping by. They make a tidy profit! There’s billions and billions of income being generated every single year. All the while they don’t even pay many of their editors, who are scientists working for free to further the ideals of science. This whole setup is disgusting and Sci-Hub is invaluable for screwing with it.

I’ve talked to many scientists who say their work wouldn’t be possible without the site. Some live in countries where universities simply can’t afford many of these subscriptions. Some simply work off campus or from home and have problems accessing the networks of universities and research hospitals because of idiot bureaucracy. I’ve even talked to scientists whose only way of accessing their own publications was through Sci-Hub. And let’s not talk about us journalists. How do you think the few of us who actually do proper research do it? Do you think newsrooms around the world shell out for Elsevier subscriptions? Give me a break.

Of course, all of this is highly illegal. And if you talk to the leeches publishers, it’s ruining them, scientific discourse and society as a whole while we’re at it. Yeah right. If it was up to me, I’d make their way of doing business illegal. Good night and good riddance!

Naturally, Sci-Hub is continuously under fire from all sides – technologically, politically and legally. It seems, the Twitter account of the site was now deleted because there’s actually a movement by lawmakers in India to decriminalise it. This is of course a fact that the people who have money at stake here don’t want anybody to know about. And if Twitter can ban the President of the United States for being evil, it sure can ban a motley crew of troublemakers led by some girl from Kazakhstan. After all, they are promoting the theft of intellectual property. Which is something you can’t steal. I’m not even sure it’s a thing in the first place.

In recent weeks, Sci-Hub has become the focus of a high-profile lawsuit in India where Elsevier, Wiley, and American Chemical Society want the site blocked. The case isn’t as straightforward as in other countries, in part because access to Sci-Hub is seen as vital by many local academics. Earlier this week, the Indian High Court declared the case an “issue of public importance,” inviting experts and scientists to testify on the matter. Meanwhile, however, the pressure on Sci-Hub grows.

This morning, Sci-Hub founder Alexandra Elbakyan informed us that Twitter has suspended the site’s official account, which had over 185k followers and operated without notable issues for nine years. Elbakyan believes that it may be directly related to the legal action in India.

“It happened right after Indian scientists revolted against Elsevier and other academic publishers after Sci-Hub posted on Twitter about the danger of being blocked – thousands of people spoke up against this on Twitter.”

Once you cross the Rubicon, you can never go back. Twitter has committed itself to censorship now. It’s eschewed its role as a neutral platform for other people’s opinions under Section 230 in favour of becoming a publisher. And all publishers have biases and are influenced by money – often by advertisers. Twitter certainly has enough of them. And, as a company, which at the end of the day is just another group of people, it has its own political leanings.

As I tried to explain in the previous issue of this newsletter: It doesn’t really matter if you agree with Twitter’s political biases or not. Rules governing freedom of speech and freedom of information are vital to our societies and democratic processes. As such, they should be evaluated based on what happens when they are used, or misused, by the people we don’t agree with – not by the ones who think like we do. Yesterday, it was Trump who got kicked off a cliff. Today it’s a vital mechanism for scientific advancement. Who knows who’ll be silenced tomorrow?