Addendum to My Cyberpunk 2077 Review 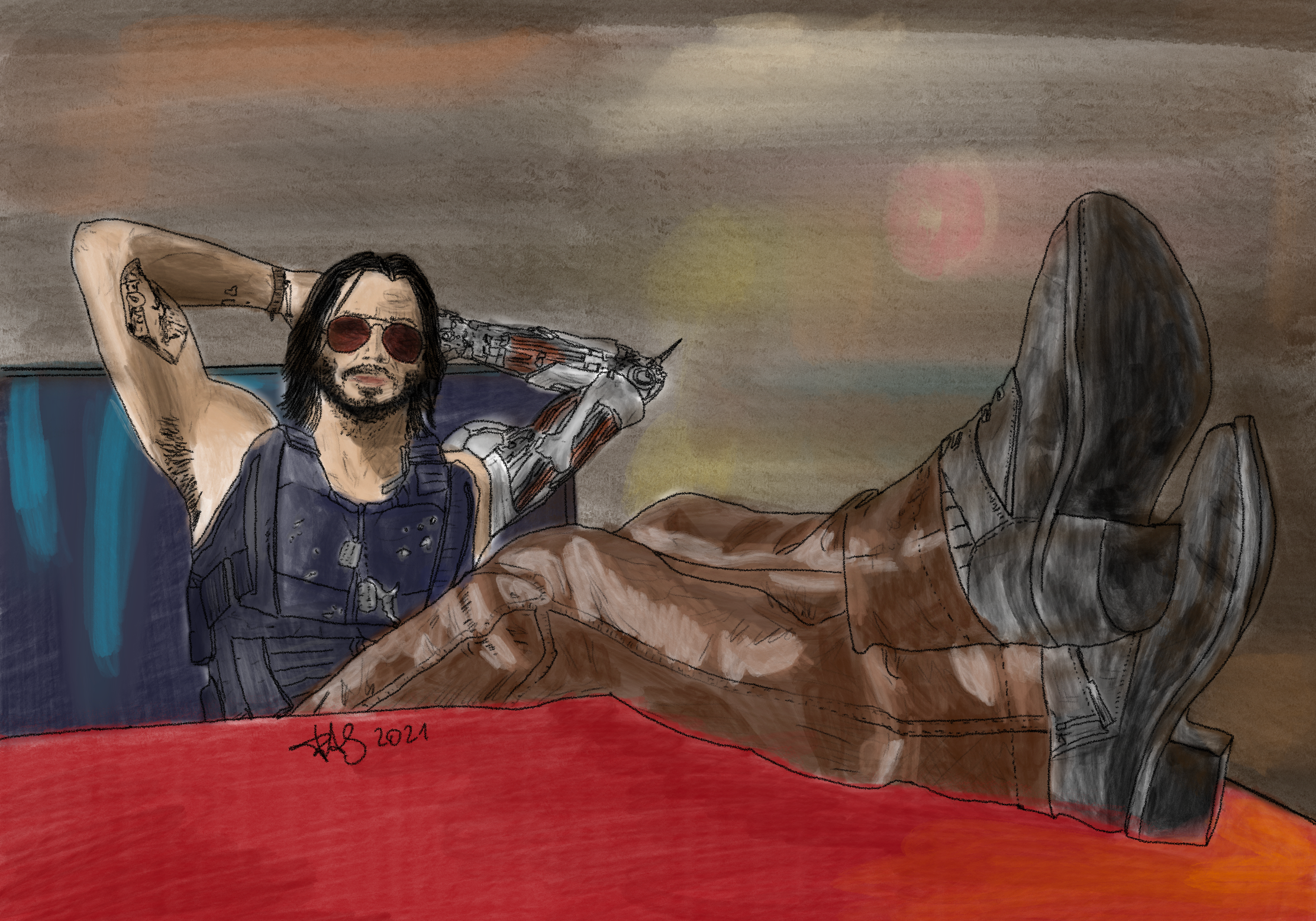 After some more time with the game, I have a number of additional thoughts on it. I think these are consequential enough to warrant a second article.

When I originally reviewed Cyberpunk 2077, I was playing through the game pretty rapidly because I only got the review job on extremely short notice a few days before having to deliver the final text and was trying to still manage to get enough playtime in to be able to write something respectable. I was also, like all the other journalists playing the game at the time, under a pretty hefty embargo. CD Projekt Red gave the game to reviewers very late before launch and then prevented them to say anything about the game until the launch was almost upon us. I think, they did that on purpose to hide a number of issues with the game as it was released. Now that I’ve played through the main story and have even started a third playthrough, I’ve had some time to think about this game more fully and I feel I’m in a better position to talk about its shortcomings and how they balance out with what’s great about Cyberpunk 2077. To this end, I want to amend my original review with the following observations.

First off I’d like to say that I enjoy this game immensely and that I still think it is great, despite its issues. I was probably less effected by most of its annoyances, especially on my original playthrough, because I am a very story-focused player. I care about story and immersion most in games and am not interested in mechanics for their own sake. I do not play games to test my skills, I play games to escape into an interesting story. Because of this, and because of the initial time constraints, I stuck pretty closely to the main storyline for my first two playthroughs of the game. And that is where Cyberpunk 2077 shines. The acting and locations are amazing and the story is fun and innovative enough to keep you captivated.

Most of the issues come in when you deviate from this path. You start to notice that this game is less of an open world than CD Projekt Red made us believe. Night City fails miserably as a place you can immerse yourself in when you’re not doing main story missions. Especially when you are used to things like the amazing Old West recreation of Red Dead Redemption II. The city itself is modelled competently, but it cannot create the illusion of a functioning city well, because NPCs just spawn in randomly and have no predetermined behaviour patterns that would create the illusion of some kind of daily routine. Aside from specific mission-related buildings, there are barely any places to go to that are interesting.

Like other open world games, the map is stuffed full of things to do, but the game in very obvious ways betrays that these were just people and locations placed there for exactly this purpose, not to create a realistic illusion of a bustling city. For example: Most of the street crime tasks are just a bunch of NPCs standing around at a predefined location, launching into a script as soon as the player comes near. If you look at them from, say, the other side of the street, you see a bunch of NPCs just standing around doing nothing. For hours. It destroys any kind of illusion that you are actually in a living, breathing city – an illusion CD Projekt very clearly advertised in their pre-launch press material. If you look at how games like Assassin’s Creed: Valhalla implements features like this seemlessly into its storyline, Cyberpunk 2077 actually looks like an approach an indie studio low on manpower would use, not a company advertising the next generation of AAA games. This open world is an embarrassing failure if you compare it to earlier games like Red Dead Redemption II and CD Projekt’s own The Witcher 3.

Of course, if you’re mainly playing the lead story and just do one or two of these tasks on the side, they just barely hold up. Which I think was the goal there. Just doing enough to fool the casual observer. If you take your time and try to immerse yourself into the game’s world, these issues become very glaring after an hour or two playing only like this.

A similar issue is present with the police in the game. If you play missions and generally avoid trouble on the streets, you’ll try to run or drive away from them to shake them. It’s only when you start playing with their mechanics that you realise how embarrassingly basic the police system is: The game picks a spot you’re not looking at (often behind your back) and then spawns in some cops who start shooting at you. If you run away, they don’t follow you far, the game will just spawn in new cops close to your new location. Which is especially embarrassing combined with some of the bugs in the game as the cops might spawn in cupboards or walls of buildings and then shoot your through the wall. GTA has done this shit better for twenty years now, it isn’t actually that hard.

In a similar vain, I find the shooting and other combat in the game satisfying, but it works because the enemy AI can cope with the attacking player in pre-defined situations and buildings. Out in the open world this soon falls apart, which especially becomes apparent on some of the cyberpsycho side jobs. You can often just sit somewhere on some level geometry out of bounds of the AI’s hardcoded AOE and shoot at them for minutes without the AI being able to respond in any way.

Speaking of combat: In hindsight it is kind of remarkable of how little combat there is during the main story quests. I enjoyed all of the talking in those missions, especially to Keanu Reeves, who I have never liked much as an actor but who I’ve now gotten a fresh appreciation for, thanks to this game – he’s doing an amazing job as Johnny Silverhand. But I can see how other, less story-focused, players would get really annoyed by all the dialogue. Especially because the combat outside of main missions is as crap as it is.

I still think Cyberpunk 2077 is a great game. But it suffers from having being advertised as something it isn’t. If CD Projekt Red wanted a AAA open world game, they should have taken the time to flesh out that world properly, instead of faking it. That would have meant delaying the game a lot more than it already was, but I think it would have been worth it. And in the end it would surely have meant less of an impact on the consumers’ assessment of the company than was caused by a launch that’s already considered one of the worst in video game history. Or they could have just advertised it honestly and cut the open world aspects that they couldn’t make work. But for that they would have had to admit that recreating a modern city in a game like this is clearly a lot harder than a medieval one like in The Witcher 3. And they would’ve had to admit that they just weren’t up to the task they set themselves.

CD Projekt is continuing to promise to fix some of the issues, but I feel like a lot of the problems I’ve talked about here are too deeply ingrained in the design of the game as it was released. I do not think they can be fixed to the satisfaction of most players without taking the time to reengineer significant portions of the game. Which isn’t a thing you can do in patches. That would warrant releasing a new, revised edition of the game. And I highly doubt the developers will do that, they have enough on their plate getting the game to run on consoles at all as it is.

With all of this in mind, here’s my revised score of Cyberpunk 2077:

CD Projekt have designed a really good RPG here. It a very nice shooter, a decent stealth game and it even feels a tiny bit like it actually has some racing simulation genes mixed in there somewhere. I love the main quest line and there are a number neat side quests to explore. Just don’t expect too much from the open world aspect of the game. A lot of the mechanics fall apart quickly as you leave the beaten track of the main story missions – which are very talky, by the way. If you don’t like intricate storylines and talking to NPCs, this is not the game for you. The numerous bugs are also a problem. The PC version of the game I played never crashed once, but there are lots of animation and object glitches which make the game unplayable at times. A lot of this hasn’t been fixed, even months after release.

Cyberpunk 2077 is a work of art. The graphics, the sound design, the voice acting, the writing …it’s all top notch. The designers wouldn’t have had to invent three separate art/architecture styles to inform their game world, but they did. And while I’m not sure I can tell them apart in the game, the version of Night City they came up with, is breath-taking – a shame that a lot of the mechanics betray the rudimentary state of the simulation beneath. Where the main story is concerned, I was absolutely riveted to find out what happens (which I haven’t seen in a video game in decades) and I appreciate characters that actually feel like you are talking to real people. It’s dirty, flawed, fucked-up, depressing piece of art, but it is art nonetheless.

The thing that stands out to me about this game the most is how mature it is. And how well it incorporates what the cyberpunk genre is actually about. Cyberpunk 2077 isn’t just a label slapped on a generic RPG. Just like The Witcher games actually feel like Sapkowski’s Witcher, this game lives and breathes cyberpunk. This is nowhere more evident than in the brilliant user interface CD Projekt has developed for this game. It is as much part of the game world as it is part of the story. They have managed to actually make the retro-future cyberspace idea from the pen & paper RPG come to life. The game’s user interface is as revolutionary as it is brilliant. Hell, they even managed to make subtitles diegetic.

In summary, Cyberpunk 2077 isn’t perfect, but it’s close. I think they actually could have pulled off perfect if they’d given themselves the time and space to put the work in. The SARS-CoV-2 pandemic would actually have been the perfect excuse – god knows every other company used it. It’s still my Game of the Year for 2020, but it missed its chance to be game of the decade. It’s worth buying if your PC can handle the load and if you can handle talking your way through hours and hours of story missions. Don’t buy it for the open world. And don’t buy it if you can’t stomach its adult themes, some of it can be quite dark at times. If you’re up for that, those scenes are what makes the game so good and there’s plenty of fun to be had, despite all the flaws.